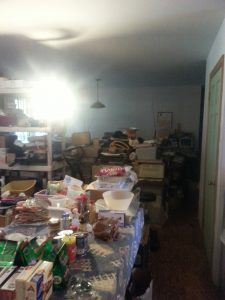 The kitchen c. 2015. The lens flare is courtesy of a droplight being used in place of the permanent fixture, which had bad ballast. Photo by Gordon Wilson 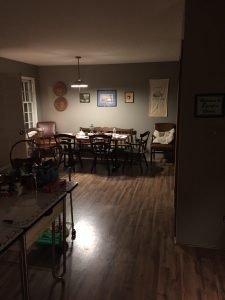 And the same angle of the kitchen as it looks today. Premature to share it, but it will make my mother feel better for everyone to know there was a happier ending. Photo by Renee Wilson.

I’m tired today. Didn’t get enough sleep last night. I went to bed after 1 AM, because I stayed up reading. I stayed up so late reading because Sundays tend to be very full these days. We’ve decided that Sundays need to be, as the Bible declared somewhere, a day of rest. We decided that after this past Saturday, when Renee fell on the steps for the second time during our recent adventures in your house. She didn’t break anything, but she wrenched her back, banged her face against a chair, and her nose bled on and off for two hours. We were afraid we were going to have to go to the emergency room to have her checked for internal bleeding.

But she saw the dentist today, two days later, and was told she just has bruising. She feels the whole incident was a result of her just being too tired from overwork, and we have been working hard. So I declared no more work on Sundays.

The plumbers are coming Wednesday to finish hooking up the kitchen and the blue bathroom. Even Charles seems excited about that. The house is shaping up and getting cleaner, too. I can’t help feeling that maybe it would be safer, and fewer people would get injured, if there weren’t so much junk laying around. Of course, it’s a lot better than it was…

The adventure of cleaning up began, I recall, right before Thanksgiving, 2015. You were slowing down, sleeping on the couch most of the time, but still ambulatory and prone to show up suddenly if we started working on something. At that point, you didn’t want anything done in the house, because you didn’t want your stuff disturbed. Mother didn’t want you upset, so no cleaning was occurring.

I don’t mean to imply that the house was dirty. It wasn’t. It was just packed to bursting with stuff. You saved everything. You once said, and you weren’t kidding, “Nothing ever leaves this house.”

The primary challenge, in the Fall of 2015, was junk mail. You saved all of it. ALL. OF. IT. Sometime around 2012, you had become obsessed with writing the date of receipt on every envelope. If someone opened a piece of mail without you first dating it, you became enraged. And the envelopes were never thrown away. Never. If you opened the mail (and you opened maybe half of it) you carefully re-inserted the contents back in the envelope. If it was important mail, you placed it back in the envelop at a perpendicular angle, so that it would be noticed. If it was important mail you had answered, especially if you had sent money to someone, you would make a copy of your reply, with a copy of the check you had sent, or the cash, and insert that, again perpendicular, sticking out of the envelope. You would then file it. You filed it by throwing it in a stack of other mail, some opened, some not, and putting it in a box, or a plastic bin. There was no order to the boxes. They were not categorized. They were not even labeled, except, perhaps, with the word “mail.” There was little hope of any of these important items ever being found if you needed them.

I must here remind you of an incident to do with the copying of mail. You were obsessed with making copies. We acquired our first copier, an office Xerox machine, when you started your own company in 1984. You copied everything. You copied books. Whole books, yes. You copied newspaper articles and cartoons. If an article was interesting, you made 50 copies and kept them in a folder to give to friends. You copied and enlarged photographs, making dozens of experimental attempts to get the contrast right. All the copies that didn’t work out you placed in a folder labeled, “Bad Copies.” And then you filed them. In those days you actually filed them in file cabinets, or at least in storage boxes.

By the mid 2000s, your Xerox copier was out of commission and stored in the garage. You got by with little HP All-In-Ones, which were never made to support the volume you were demanding of them. I noticed, in the last years, that there seemed to be a new copier/printer in the office almost every time I came over. I found the old ones squirreled away throughout the house. “It stopped working,” you would tell me. And, uncharacteristic for you, you would neither speculate on why it had stopped working, nor tell me you were going to fix it.

One day you asked me to look at your newest copier. It kept printing only half a page, you explained. You showed me dozens of examples of half-finished color copies of order forms and twenty-dollar bills. I joked that maybe the copier knew you were trying to copy money, and didn’t want to be part of a counterfeiting ring. I made that joke in Ethan’s presence, and he said, “Actually, that’s exactly what it’s doing.” Ethan had just taken an information technology course at UMBC, and he’d picked up something that an IT manager with 30 years’ experience (me) had missed: Modern scanners are programmed to recognize paper money, and to stop printing if someone tries to copy it.

You were annoyed because you couldn’t keep “file copies” of all the cash you were sending God knew where. I was mortified because I realized that all those printers that “didn’t work” had actually just refused to print copies of money.

Not a good time. I’ll say more about the cleanup tomorrow.