I won’t lie to you, it’s been a pretty awful week. 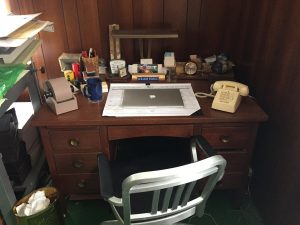 My father’s desk. Hasn’t changed much in the last 40 or so years, other than having some junk moved off of it.

I’ve felt angry, depressed, and pretty damn well worthless, and it’s largely because I’ve been forced to absorb other people’s pain. I’ve come to the conclusion that there’s enough pain in the world that we could all be situationally depressed 24 hours a day, seven days a week, 365 days a year, every year, if we chose to be. And that’s the problem—so many of us choose to be.

Now, when people eventually read this, someone will no doubt say that I’m dismissing the depth of pain caused by depression as an illness. I’m not, really. I’m just saying that, unless someone is suffering from clinical depression, ongoing sadness is a choice, and too many people choose it. Being sad, angry or feeling stupid is something we all have to do sometimes. But some of us choose to do it for longer than we need to.

I can’t do it anymore. I’m angered out, depressed out, embarrassed out. I can’t find room in my life to maintain the bad feelings. It takes too much energy, and I just don’t want to. I’d rather move past it and do something productive. So, even though I confess I have felt this week that perhaps this whole project is doomed, that soon I may be forced to, for my own good, turn on my heel and walk away… even though I’ve felt that, well, here I am. Still pushing forward.

Dammit, I don’t know what else to do.

You and Mother owned six pieces of property, a total of about 82 acres of land and two houses, plus a sawmill and possibly a mica mine, in Maryland and North Carolina.

You bought the first lot in 1953, just after you were married. It was ten acres off an old logging road in an area named Shady Cove, or so a sign on one of the trees proclaimed. Apparently, it was once known as Shanty Cove, I presume because loggers’ shanties had lined the road. Your grandfather, Chrisley Rathbone, had owned the land once, and built the access road, but you didn’t buy it from him. His brother John had had a house back in the woods there. That house was still partially standing during my lifetime.

You built a new house there—the Chocolate House. Someday, you were going to move there. You never did. But we visited a few times every year, until your parents died. They lived just down the mountain from it, on land that eventually adjoined yours. When I was in middle school, you bought the John Field, about eight acres with access to the public road, Rocky Fork. I mourned when Rocky Fork was paved back in the 90s. Eventually, you wanted to build a new road through it, since we shared Chrisley’s road with another family. (In 2014, that family’s heirs would challenge our right of way, so I arranged to have the road built through our land.) And then, when I was in high school, you bought 42 acres of mountain land backing the original lot. Somewhere in there, because someone wanted cash, you bought an acre along Rocky Fork Road.

And, of course, you owned the 13 acres that this house sits on, on Simpson Road in Clarksville, Maryland. It’s worth, for tax purposes, about twice as much as all the rest put together. So today we’re going to draw up the legal plan for me to have Simpson Road, and Susan and Charles to have the rest plus, eventually, the difference in cash.

I guess I’m a little nervous about all of this. What if the attorney says, “It can’t be done?” What if we’re told that, upon Mother’s death, our only choice is to sell the house on Simpson Road? I don’t know if I’ve said it to you before, but I’ve said it to the others: that would be like watching you die a second time.

And, of course, there’s a tremendous responsibility involved, and there’s a bit of sacrifice. The responsibility is being the one holding the bag—owning this house you built, and having to finish and care for it. Yes, it’s what I want, but it’s still a very big load to carry. The sacrifice is that, well, I may have to sell my own house, The Old Elkridge Hunt Club, which I’ve owned for 22 years. And that house is just as much mine as the house I grew up in. I’ve lived in it for as long as I lived with you. My kids grew up there. It’s a one-of-a-kind, 148-year-old gem. I hate the thought of leaving it.

And I hate the thought of losing your house. I think, if I did, I’d have to leave Howard County entirely. And, well, that would cost me the Hunt Club as well.

Renee says everything’s happening too fast. I guess it is. But there doesn’t seem to be a speed knob anywhere on this thing.