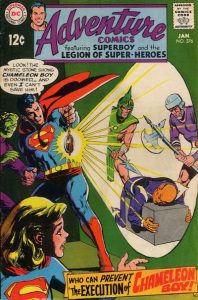 Seems kinda obvious who, since BB was competing against Chameleon Boy when last we saw him. Of course, Chuck had returned carrying a wounded Chameleon Boy, so whassup? Turns out, as we see in flashback, that Cham’s pet, Proty II, had snuck along on the mission. When Psyche, the temporarily villainous Wanderer, had used her powers of emotional manipulation to make Chuck to want to kill Cham, Proty had assumed Cham’s form to confuse everyone. Proty had been grievously wounded, and Cham had taken BB’s form. Why? I shall quote:

“Then I got the idea of borrowing BB’s identity, hoping it would be an ace in the hole in the final round. As it turned out, I didn’t need it… But I’d hoped to take our challenger by surprise as Bouncing Boy.”

Okay so… Wait, what? No that doesn’t make even a gram of sense. Why would this even occur to Cham? Because Chuck’s form is somehow less intimidating? Maybe? I got nothing. It pretty much comes off as a dodge to make the ending of the last issue have a twist, and, for me, it makes the wires visible in the storytelling process.

And, now that I think about it, when Cham takes BB’s form, since his antennae do a full scan of whatever he’s duplicating, how could he not have BB’s fingerprints?

Anyway, while the Legion try to use the seven stones that the Wanderers stole last issue, which have the power to show events across time, space and dimensional barriers, Cham finds himself on Nadir, an other-dimensional world of knights and nobles. It’s basically King Arthur’s Round Table with super powers. I admit to a bias against this kind of story. For one thing, after reading a lot of Arthurian legend, I realized that all of Arthur’s knights were jerks. For another, fantasy that romanticizes a pre-liberty, pre-enlightenment time in human history just turns me off. Surprisingly to me, though, Shooter made this story work by making it first and foremost about Cham and his loneliness.

Sir Kayle, knight of King Artros, explains to the disguised Chameleon Boy that his challenge is to fight Kodar the Black Vassal, who is too powerful for any of the Knights of Artros to defeat. If Cham loses, the lovely Princess Elwinda will have to marry Kodar. If he wins, he gets her hand in marriage. But introductions are barely over when Radagor (their Merlin) realizes that their Legionnaire champion is not in his true form. They demand that Cham reveal himself. When he does, they declare him “inhuman,” “alien,” and “a monster.” He may be an okay guy, but would you let your princess marry one?

Left along while the king ponders, Cham changes to a bird and flies over the Kingdom. He catches Elwinda alone in her garden, and, smitten, takes the chance to talk to her. He uses his shape-changing to amuse her and convince her that he’s not dangerous. And then Cham falls full-on in love—which gets him locked in the dungeon. As he sadly reflects on his situation, we learn of the basic loneliness he’s lived with for some time: “I’d face a dozen Kodars for Elwinda… Face it, Cham, she’s the first girl who ever looked past your point ears… and you love her.”

You have to ask, aren’t there plenty of Durlan girls who would not have to look past Reep Daggle’s pointy ears? We later see a Durlan girl, Yera, and she has pointy ears of her own. But Reep seems to want a non-Durlan girl to notice him and love him. Is this unique to him? Is it a result of the fact that he’s spent a lot of time among Earth-style humans? For we learn in this issue that Reep is human, and thus all Durlans are. They have ears and antennae, and shape-changing power, but we assume his claim to humanity means they have a similar genetic structure.

So why Earth girls, or at least non-Durlan humans? Why would Reep look for love in a place where his features made him an outcast? This suggests a backstory in which Reep was already an outcast, and in which “normal,” to him, was Earth-type humans, not his own people. Or maybe Durlans just have a fascination with Earth-humans. We would learn years later that Reep’s father spent years locked in the form of an Earthman, R.J. Brande. And his countrywoman Yera would, of course, pose as a non-Durlan to win the heart of Colossal Boy.

In the end, when Kodar attacks, Cham is freed from the dungeon and winds up saving the life of Artros and defeating the Black Vassal. Artros now enthusiastically offers to make Cham his son-in-law. Cham goes for it. He’ll abandon the Legion to be with Elwinda. All he has to do is go through Nadir’s weird marriage ritual, wherein the groom gives his vows while exposing his neck to the headman’s axe. The assumption is that, if the groom gets cold feet, the axe will fall and he’ll have cold everything. It’s not as off-base as one might think, since the historic roll of the best man at a wedding was to marry the bride in the all-too-likely event that the groom was murdered during the ceremony.

But remember that the Legion was scanning other dimenions and times for Cham? Well, of all times to find him, they do it when his head is on the block. Naturally they whisk him away with an experimental, long-range teleportation device that Brainy just happened to have (convenient, that) and they seal off the portal between Earth and Nadir… forever.

And they wonder why Cham isn’t happy to be home.

Supergirl appears prominently on the cover, even though she plays no roll in the story. She appeared on covers more in the last year of the Legion’s run in Adventure than at any time before that. Possibly this was to prep readers for the fact that she was about to take over the book.