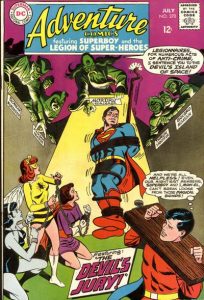 Yeah, confronting Mordru sounded like the right thing to do, and was a great way to end an issue. But then he showed up, and he was just so dark, ominous, powerful and, well, Mordru-ish, that the plan started to seem less swell. The Legionnaires go into hiding again, and, this time, they decide to do this thing right. Superboy had said last issue that maybe they’d better “forgot they were ever Legionnaires.” This issue, he sets up a hypnosis machine, and makes them do just that. He hypnotizes his parents, too. They are, after all, the only people in Smallville who know that Clark Kent is Superboy, and that he hangs out with the Legion.

Only they aren’t. And Mordru even sees in Pete Ross’s mind that Pete knows his friend’s secret. But Mordru is still fooled, because there are no memories in the minds of Clark Kent, Bob Cobb, Betsy Norcross and Marie Elkins that they are super-heroes. Mordru doesn’t give up easily, however. He summons his armies from the future to take over Smallville. For good measure, he breaks free the ground beneath the town and floats it up off the Earth.

And that’s quite an appropriate comparison, for the floating city featured in Avengers: Age of Ultron was, in fact, inspired by a floating city in an Avengers story from the 1970s, the one that chronicled the first appearance of Graviton, and which was written by none other than Jim Shooter. Shooter can pretty much take credit for the floating-town sub-genre. (Although Stan Lee and Jack Kirby first shot the Baxter Building into space a few years before this.)

The armies of Mordru then go about the business of trying to root out their quarries. They threaten Betsy and Marie, only to be attacked by Lana. They beat up Jonathan Kent, trying to get Clark to admit he’s Superboy. And he does! Poor Clark! He has no idea of his true identity. He just wants to help his Dad. It’s one of the most poignant moments in his career.

It’s up to Pete Ross, who knows the truth about the Legion, to restore the memories of being Superboy to Clark Kent. He enlists Lana Lang, who, as Insect Queen, kidnaps Clark from his bed and takes him to Pete, who proves to Clark that he’s invulnerable and super strong. Clark brings the others around with his memory machine, and they formulate a pretty cool plan for attacking Mordru. It involves Duo Damsel using one of her bodies to pose as Shady, and Pete Ross donning a costume and flight ring to act as Superboy, so that the real Superboy and Shadow Lass, with Insect Queen, can make a sneak attack and bring down Mordru.

Cool plan. Utter failure. The six Legionnaires are captured and brought before “The Devil’s Jury,” criminals from the 30th Century who will try them for crimes against crime. Mordru laments that the Fatal Five were not available, but he did get a bunch of guys no one’s ever heard of. (There’s a murderer named Dorzak, later the name of the villain in one of the more watchable episodes of Space: 1999 Year Two.)

We’re never told where or when this courtroom is, but it’s apparently on a volcanic island on some world. Pete Ross is counsel for the defense. The prosecutor is a guy named Wraithor, Mordru’s chief henchman. After the Legionnaires are (surprise!) found guilty, they’re sentenced to die in a sealed vault. But Wraither hates Mordru and betrays him, trying to free the Legionnaires and dying for his trouble.

In the end, Mordru defeats himself, working up such a powerful energy attack on the kids that the Earth collapses and imprisons him, once again, in an airless state. The Legionnaires, ironically, are saved by the force bubble Mordru had created to imprison them.

So, about their comrades in the future having been “taken care of” – when did Mordru go after them? The theory was that Mordru would be hell-bent on catching the four who fled to the past, and would pay no attention to the others. That is, presumably, the reason that these four made no attempt to go home and warn their friends. Only he did go after their friends. Fortunately, Dream Girl saw him coming, her sister White Witch flew by to counter his attack, and Princess Projectra caused him to believe he’d destroyed them with her illusions.

Good story. Satisfying ending. And then Mon-El goes and says, “To think of all the trouble we had dodging Mordru! How ironic that he was defeated by three girls.” (If it makes you feel better, Mon, you can tell yourself it was their cooties that really stopped Mordru.)

Give the guy a break. He’s a thousand years old.