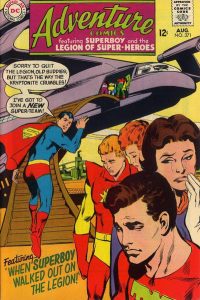 Arriving at the Academy, CB is told by an adult teacher, who addresses him as “recruit,” to get into Academy uniform. No special costumes allowed. But who is this adult? Most likely, the Legion decided to contract out the Academy chores, the members serving only as occasional, visiting instructors.

Condo Arlik, Chemical King, makes his first appearance as a live person and not a memorial statue. He seems confident and optimistic here, not all Goth and suicidal like he was when he faced Deregon years later. He does not know who Colossal Boy is, and attempts to befriend him as a fellow recruit.

Bouncing Boy, who comes to teach a class, also attempts to maintain Gim’s anonymity, but he can’t help breaking the wall and showing concern for his friend, who seems distracted and distraught. Colossal Boy seems bound and determined to not ask anyone for help. Understandable, I guess, since he has decided the only way to save is parents is to commit espionage.

Puzzled, Chuck heads to the Allons’ place to ask them whassup with their boy. He finds no evidence of foul play, so doesn’t think much of the fact that they’re not home. How the hell he got in when they weren’t home was not explained. He does find Mrs. Allon’s life-jewel, and papers revealing what Gim is up to.

So it’s time for a court martial, and a court martial always means BASTARD PEOPLE! Brainy tries to act as counsel for the defense, but Gim will tell him nothing. So, with no defense, he’s found guilty and expelled. “Get out… and never come back!” Really, Jo? Yes, it looks bad, but really? And, when CB begs for mercy, “disgrace to the Legion” goes flying. This is just an unnecessary reminder that, much as we love them, the Legionnaires are not above being smug, back-biting little pricks.

Who’s got the life-gem? Bouncing Boy finds it on the floor of the apartment, leading the reader to wonder how and why Gim left it. If it’s so precious, why would he leave it? Chuck presumably takes it with him, and, later Gim has it. We’re left to assume that, between panels Chuck passed it off as a favor to a friend.  Keep your eye on it, though. It’s important.

Ultra-Boy is leader, which was announced on a letters page, but not depicted in a story.

The art looks a bit different this time, even though it’s the same creative team. It doesn’t have the “wow” factor that Swan & Abel brought to the Mordru stories. Perhaps it was more rushed, and perhaps it’s because Shooter did layouts?

What the hell does the dramatic Neal Adams cover have to do with this story? Nothing. It’s based on the Superboy solo story from Superboy 101 which featured the Legion only in two panels which were apparently inserted only for this reprint.

Superboy is blackmailed into leaving Earth to join a super team being assembled by aliens to protect their own planet. Hilarity ensues.