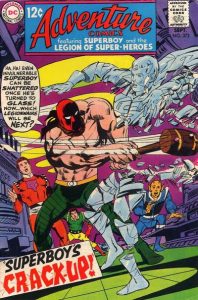 And now it’s time once again to play the new hit game “life jewel life jewel, who’s got the life jewel?” On the street where CB was not arrested, the Legionnaires find Mrs. Allon’s life jewel. CB had it in his hand after his parents were glassed, but then it was on the floor of the apartment, after he had joined the Academy. Bouncing Boy retrieved it, and you would think it would be held as evidence or a clue, but there it was, in Gim’s hand, in the holding cell before his trial. Then he dropped it in the struggle with the Science Police. And good thing too, because it turns out to be the clue that leads the Legion to him, and allows them to save his parents and his reputation.

But first, they make a second visit to the Allons’ apartment. What is the point of this? Or, more to the point, what was the point of two visits, other than to slow down the story, and maybe because, when the first part was written, no one had a handle on where it was going, and what was published was half a story and a rush job? In the first visit, Chuck finds the life gem. He learns nothing from it, and he apparently returns it to Gim. It could as easily have stayed in Gim’s pocket. Chuck also finds proof that Gim has committed espionage. Okay, that’s important. But could he not also have learned, since Gim had apparently been in the Academy for a day or so, that the Allons had disappeared? There was no reason to incorporate a second visit and have all this dash and grab with the gem.

All is forgiven, however, because of the way the gem leads to a featured role for the oft-underused Shrinking Violet, and a very creative use of her powers. She shrinks to photon-size and follows the emanations of the life jewel back to its owner, Mrs. Allon. The fact that this involves flying through space at “warp speed” is a little sketchy, but, hey, she’s a photon at this point. Vi finds Colossal Boy, and we learn why his blackmailers wanted the info on the Academy—because they’re building one of their own! Here we see the origin of the LSV, and we’re told it is such. Tarik the Mute, a bystander shot in the throat by police once, has turned bad and started a school for crooks. Colossal Boy is a teacher.

Vi goes back to HQ with her report, including the reason for Colossal Boy’s treachery, and an amazing thing happens–Imra shows some sympathy! “Poor Colossal Boy! When I think what we did to him…” Ya mean maybe you should gather some facts before acting like Bastard People, Imra? I concur! It only took her 52 issues to get there, and we’re all proud of her, I’m sure.

So the Legion forms a plan, and Superboy, Chameleon Boy, Chemical King and—wait, where did Timber Wolf come from?—head to Mars to fight the cops, and meet Tarik’s recruiter. He takes them to the School for Villains, proud of having scored what he believes are four Legion rejects.

At the school, we see Nemesis Kid working out against a robot fighter, Radiation Roy and Spider-Girl sparring, and a still-red-haird Mekt Ranzz, Lightning Lord, honing his powers. Unfortunately, Colossal Boy recognizes Superboy, who honestly hasn’t done much to disguise himself other than somehow color his hair brown. And then he picks our Chemical King and Timber Wolf as well. Fearing that Tarik might kill his parents if he keeps silent, he cries out to the student villains that the newcomers are Legionnaires.

The Legionnaires are defeated, and Tarik, in a stylish, 20th-Century neck brace sentences them to die by glass and smash, a technique he demonstrates on the recruiter who brought them here. He tells Superboy he’s going first. In their cell, as they wait to die, Superboy points out that he had “extra makeup” in his cape, in case his disguise needed repair. That would be the slight wash of brown in his hair, correct? Musta been a helluva a good makeup kit, because Superboy disguises himself as Cham, and Cham turns into Superboy. Thus they fool Tarik into thinking he’s executed the Last Son of Krypton—Cham turns to glass and then turns to smashed glass.

How exactly did “makeup” disguise SB as Cham? Did he have a whole box of moulds to make latex appliances, or…? I suppose he could use super strength and x-ray vision to fashion antennae. And a bald cap. And ears… Hmmmm…

The rest of the Legionnaires are summoned, the budding Legion of Super-Villains is defeated, and CB is voted right back in. It’s interesting that the rules are so easily bypassed.

And Timber Wolf and Chemical King are made full members.