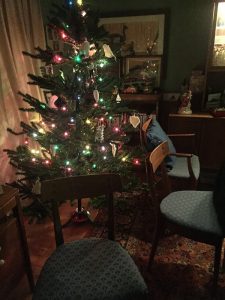 The Christmas Tree from People’s Drug. Why the circle of chairs, you ask? There was some concern about how the dogs would react to the tree. In days gone by, it was kept in a playpen, to protect it from the cat. The cat loved laying in the playpen under the tree. The dogs were indifferent, chairs or no chairs.

Let me tell you about Christmas. Our first Christmas without you. The first Christmas the world has had without you since 1921. And, in 1921, Christmas would have been celebrated—at least in Pensacola, North Carolina, without streaming music, without CD players or vinyl record players, even without a radio. Your Daddy owned the first radio back in those hills, and neighbors came to visit in the evening just to listen to it. But that was years later.

Christmas would have been celebrated without electric lights on the tree or the house, without telephones so that out-of-town loved ones could call. Your Grandpa and Grandma Rathbone would have had to come through the woods or around the bend in the road to visit the log cabin where you were born. (Although I think your Grandma essentially lived with you anyway. She delivered you.) Your Grandfather Jake Wilson was five years dead, and his wife had married for a third time.

And now we’ve just passed Christmas 2017, the first one without you in 96 years. Around Hallowe’en I asked Mother, “What do you want to do for Christmas?”

“Not much,” she said, and then explained again that she didn’t have a lot of money for gifts, with your income gone.

“I meant where do you want to celebrate Christmas,” I told her. For years, since not long after Renee’s Mother died and Christmas became a bit depressing, Renee, Ethan, Christian and I had spent Christmas in Rehoboth Beach. I was hoping Mother, Susan and Charles might join us this year.

But Mother was being more location-specific. She said, “In the music room. I want to put the tree in front of the window and have a train running around it.”

Okay, that was very far off from what I had in mind; but Mother had spoken. There was going to be a tree in the music room with a train around it. We would make that happen.

Now the music room, you probably don’t realize, had been in flux for months. You had planned it as a satellite room, linking the main foyer with the living room on the Southeast corner of the house. It would hold a piano, which it has since the day we moved in, and we would buy a console stereo to sit under the 30-paned double window—one of those pieces of furniture the size of a small couch, with a turntable and radio in the middle, under a hinged cover, and speakers and record storage on either side of it.

The console stereo was never purchased. You stacked door frame sections and rough pine boards under the window and kept tools and the boxed Jenn-Air range for the kitchen on the floor around the room. When I went to college and you cleared out my downstairs bedroom for an office, you moved my government surplus steel desk in there. And then you added a light table, the recently discussed boxed Sears air compressor, dozens of boxes from Harbor Freight, and storage boxes of newspapers. By 2017, the room was impassable. You literally could not walk into it.

Before you died, I began to clean it out. But, every time I got the floor clear, we needed a place to stack recyclables and trash that had come out of other rooms. So, while we had planned to make it a sitting room with Ethan and Jessica moving in, it was still pretty much in disarray. Renee and I made sense of the living room (more about that another day) so that the last of the building supplies could leave the music room. She hung curtains in the large opening between the two rooms.

We put down a shag rug from our own family room—no longer practical to keep, with aging cats in the house—and set up furniture. By Thanksgiving, we were ready to put up a tree. I had purchased a Lionel Amtrak passenger train set for a hundred dollars at Objects Found in Catonsville. Now we just needed the tree.

For the last years of your life, with grandchildren and pets in the house, and with her own energy level waning, Mother had put up just a small tree on a table in the family room. That wouldn’t work for what she had in mind, but, while there were a half-dozen artificial trees upstairs in her general purpose room, we couldn’t find a full-sized one. So we used a pre-lit tree from our own garage. It had been dumped on us by relative, amidst about two-dozen boxes of ornaments, about two years back. We stood it up, tore into boxes of ornaments that Mother had collected over the course of 65 years, and we had a tree.

And then Ethan came in, carrying a large, flat box, and said, “I found this in the corner. It says it’s a Christmas tree from People’s Drug.” He had found the full-sized tree. So we put that up in the dining room. It’s not like there weren’t enough ornaments to go around. Finally, knowing that Mother doesn’t move around as well as she used to, and wanting her to be able to seea Christmas tree, we did put up the small tree on the table in the family room, where you died, and where she still spends most of her time. For that, having drained the ornament stock down, I had to dig into a tall, yellow box in her general purpose room that I remembered was, “The Christmas Box” from my childhood. I found ornaments so old even I had never seen them, and those went on the small tree.

There was lighted garland on the front door, and the entry hall was, for the first time in its existence, decorated for Christmas with more garland and a Christmas quilt over the stairs. The only thing I forgot to do was put candles in the windows. Oh well… Next year.

I still intend to buy that console stereo. I bet you didn’t know that they haven’t been made since I was in high school. But they’re out there…