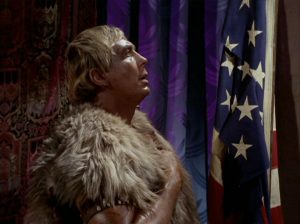 Kirk and Spock figured out that they’d stumbled upon a world that evolved in parallel to Earth. Roddenberry touted the idea of “parallel evolution” for the series, because it allowed him to create lots of worlds where the people looked like us and shared some of our culture, so that the stories he told about those people could be relevant to his audience. On this world, Omega IV, there was a United States with the same Constitution and even the same flag that the U.S. had on Earth, and there were, apparently, also communists living in China and Russia. “They fought the war your Earth avoided,” Spock explained, “and, in this case, the Asiatics won.”

Looks like they didn’t win much, though. They lived in pre-Enlightenment conditions, without electricity, or, apparently, gunpowder. Their opponents, the former Americans, had taken to the woods and the plains, and were living like the indigenous peoples of the Americas did before Europeans colonized their lands. Their language had become corrupted to the point that Communists were now “Kohms,” Yankees were now “Yangs,” and “We the People,” was repeated by the Yang Elders as “Ee’dplebnista.” The only recognizable word left was, apparently, “Freedom.”

The Yangs did not speak because they didn’t consider Kohms worth speaking to. “They are only for killing,” the Yang leader told Kirk.

Kirk, of course, straightened out this mess. He read their sacred words to them in language they understand:

“Hear me! Hear this! Among my people, we carry many such words as this from many lands, many worlds. Many are equally good and are as well respected, but wherever we have gone, no words have said this thing of importance in quite this way. Look at these three words written larger than the rest, with a special pride never written before or since. Tall words proudly saying We the People. That which you call Ee’d Plebnista was not written for the chiefs or the kings or the warriors or the rich and powerful, but for all the people! Down the centuries, you have slurred the meaning of the words, ‘We, the people of the United States, in order to form a more perfect union, establish justice, ensure domestic tranquillity, provide for the common defence, promote the general welfare, and secure the blessings of liberty to ourselves and our posterity, do ordain and establish this constitution.’ These words and the words that follow were not written only for the Yangs, but for the Kohms as well!”

“The Kohms?” demanded the Yangs, who only wanted to kill Kohms.

“They must apply to everyone or they mean nothing!” Kirk confirmed. Later, he summed up the moral for his friends: “Liberty and freedom have to be more than just words.”

A friend of mine got me thinking about this the other day. She observed that Republicans pretty much want to keep things the way they are, and that Democrats recognize that things have to change, and that it’s inevitable that we move toward a better society. She concluded that Democrats are rational and Republicans are just being stubborn.

And that got me thinking. Don’t conservatives (note that I changed the label—a lot of Republicans no longer hold conservative values) recognize that change is inevitable? Don’t they want us to evolve to the good as a society? And aren’t they just as capable of rationality as a liberal? (Another label change—a lot of Democrats have no claim to the name, “Liberal.”) I think they are. I mean, William F. Buckley was a very intelligent, rational man. So is George F. Will. Ayn Rand was all about rationality, though she would never accept the label “Conservative.”

I think conservatives probably distrust change. I distrust it myself. Liberals probably are more open-minded about change. But there’s good change and bad change. So they both stand a chance of being correct while aligning with their natural biases. Change is inevitable because the universe is dynamic. But the changes we can control—which are the ones we debate politically, need to be carefully considered before we effect them.

But what about evolving a better society? Here’s where I think the crux of the difference between Left and Right lies, and here’s where “The Omega Glory” plays in. What do we in America, all of us, liberal and conservative, claim to want? Don’t stretch too hard, it’s freedom.For us, as for the Yangs, it’s a sacred word.

Don’t get cocky, my liberal friends. Before you put this essay down and start snarfling your lattes and chomping your brie (Ew! What a horrid combo!) I have some things to say to you, too. How can liberals say they believe in freedom when they want to censor the words we use for fear that someone might get hurt feelings? When they want to forcepeople to buy health insurance? When they’re willing to let the government decide whether or not we use every other drug that isn’tpot? When they want to regulate the very pronouns we utter?

It’s because “freedom” has become a word almost as meaningless to us as it is to the Yangs. Almost. At least we, if we stop and think about it, can come up with definitions.

But those definitions vary pretty radically between liberals and conservatives, and both groups are willing to compromise freedom in order to hold back people who don’t believe as they do.

Conservatives would most likely say that freedom is a positive. It’s a freedom tospeak. It’s a freedom to work at a profession, trade or unskilled job, earn wealth, buy property and control that property. It’s a freedom toworship as you see fit. It’s a freedom tosucceed. And I would assert that, believing in these freedoms, conservatives would say that we areevolving to the good as a society, because more and more people have seen the American experiment succeeding, and are asking for similar freedoms. We defeated Nazi Germany. The Berlin Wall fell. We built the Internet, and, though other countries try to control it, it still lets people everywhere know more about each other… except maybe in North Korea.

Liberals, and I’m really generalizing, (and that will be quoted back to me… but maybe not, since I called it out) seem to be more about freedoms as a negative. We should be free fromunreasonable search and seizure, free frombeing told we can’t practice our religion, free fromhaving government or law enforcement treat us differently than they treat other people, because we belong to certain groups.

(“Negative” is not to be seen as a bad word, in this context. The Bill of Rights is famed for being a negative document. It guarantees freedom by telling government what it’s not allowed to do.)

For liberals, though, freedom means more than freedom of opportunity. It means, as FDR laid out in a speech long ago, freedom from want and freedom from fear.

I don’t have answers. I have my personal beliefs, and they are neither liberal nor conservative. I favor change when it makes sense, and I favor staying the course when that makes sense. And I don’t believe in sacrificing freedom to authoritarianism in order to see a political or social goal met. I had two parents, and they were all I could handle. I don’t need more.

But I do think that we could understand our differences a lot better if we question our basic beliefs, and the definitions of our favorite terms. We need to know, not only what freedom is to us, but what it is to those we disagree with. Otherwise, we’re trying to shout directions at someone when we have no freaking clue where they’re going.

And that’s an awful lot like chanting the opening words of the Constitution as “Ee’dplebnista norkohn forkohn perfectunun” without actually knowing what the hell you’re saying.

Oh, but in recognition of Independence Day, a day on which I would proudly fly the American flag that others are sadly ashamed to recognize right now (if I could find mine), let me say this: There is one freedom that is in no danger of being voluntarily sacrificed by people of any political stripe in this nation. That is the freedom to criticize our leaders. If you really fear we’ve become a fascist dictatorship, read some of the statements made about President Trump on Facebook, and, before him, President Obama. Those blistering remarks are made openly. That would never happen in South Korea. And in a lot of other places, it wouldn’t happen twice. Some of you publish words every five minutes which would get you shot by Kim Jong Un if he were your ruler.

So, although I may sometimes ask you to tone it down, all that vented anger really does give me hope. It means we’re all still free to be mad as hell. And that, at least, is a beginning, now isn’t it?

2 thoughts on “Freedom? That is a Worship Word… You Will Not Speak It!”