This is the third day of my first year without you. I want to tell you all about Christmas—not that you had time for such things—and all that’s been happening otherwise. But, before I do that, I had to tell you— 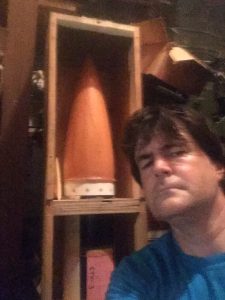 All those late, endless nights that we spent working, when I was yawning, my eyes were closing, and it was usually cold—because we were usually working outside—I never understood what it was that drove you to work so hard. We worked on cars, we worked on the house, we worked on building shelves to hold the stuff that you kept bringing into the house, we went and picked up the stuff and brought it into the house. And, might I remind you, the stuff included B-52 gun-sights, half-ton antenna mounts, giant darkroom enlargers and 12-foot long gas lasers. Oh, and missiles. Five missiles, At least their noses. Those, at least, you wired up and used for your actual, paying work.

But I never understood how it was that you kept going until all hours. You never seemed tired. You actually seemed cheerful, for a change. Cheerful, that is, until something didn’t go the way you wanted it to. But you were especially cheerful when the rest of us told you that we were tired, bored, cold, and just wanted to stop.

Honestly, I thought you were a bit of a sadist.

I started to understand you, just a little bit, back around 1983. We were cutting down trees at the Chocolate House. Well, you and others were cutting down trees. I was 18, but I don’t recall being drafted to do that work. I must have done a little, though, because I remember being on the hill behind the house, holding something for you, when you yelled at your brother Bob to stop what he was doing. Uncle Bob said, “I’m just cutting these logs into lengths.”

“I was saving that job to rest on,” you said.

“To rest on.” Your idea of “rest” was to do less complicated work. I remember that trip to North Carolina as being the time in our lives that you actually seemed happy and relaxed for a change. I gathered that you liked doing work that didn’t require the full-on power of your incredible intellect, and that didn’t in any way involve going to meetings, evaluating employees or explaining difficult concepts to dogfaces with stars on their epaulets.

The “Chocolate House,” by the way, has been mentioned three times now; and I’ve never explained why it’s called that. Susan named it. She was two or three, and you had just painted its cedar siding. (I believe it’s cedar, anyway.) You had painted it a chocolate brown, so Susan thought of chocolate when she looked at it. “The Chocolate House” it’s been ever since. 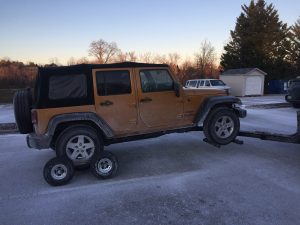 My Jeep leaving its oil-soaked parking space. Turned out, at its oil-change the day before, the techs had over-tightened a plastic fitting and broken it.

I figured it out last night. 2018 has not begun well. It’s been well below freezing here. The night before New Year’s Eve, I went to put some things in the back of my Jeep, and discovered that its vinyl rear window had shattered in the cold. Its heat had also gone out, so I made a hundred-mile drive back from Rehoboth Beach without heat. And then, yesterday, I went out to start it and discovered oil all over the parking lot underneath it. I had to have it towed for repairs. And that’s just my minor irritations. My brother-in-law’s house caught fire last night. You remember Russ. You always liked him. He and his family are okay, but they can’t live in their house. And then there are family disagreements and friend issues and health concerns…

Yesterday, I came to one of those low places where it feels like the universe is plotting your demise—that it’s just going to keep throwing problems at you until you give up and cry “uncle.” (I don’t understand that expression, but I think it means what it’s supposed to mean, so I’ll use it.) I had a job interview like that once, and I blew it, because I didn’t know what the hell these people wanted from me. I finally looked at them and essentially asked, “What the hell do you want from me?” They never called after that. 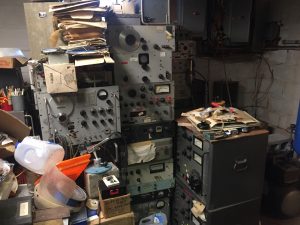 I told Renee I felt useless, and she said to go and do something that made me feel useful. So I came to your house, went to the basement, and worked on it. I threw away trash and recycling. I carried equipment to the front room for the eCyclers to pick up. I moved furniture. Before I knew it, it was past 11:00 PM, and I was not tired. I recognized that I needed to stop before physical exhaustion set in (I don’t believe you would have!) but I was disappointed to have to stop around 12:30 AM.

I felt useful. I’ve been working on the house for so long, which can be frustrating because I’m not a confident craftsman, that I’ve forgotten how good it feels just to make sense of things.

To be clear, I didn’t feel great afterwards. I didn’t sleep well. I didn’t suddenly feel like I could conquer the world. But I felt a little better. Like maybe, someday, someone could conquer the world with my help. Maybe work is like a drug, and it only feels good while you’re doing it. Or maybe I was so far down that even the best therapy was only going to bring a small measure of improvement.

And no, I don’t forgive you for the time you kept me awake for 36 hours straight building shelves. That’s not going to be happening.