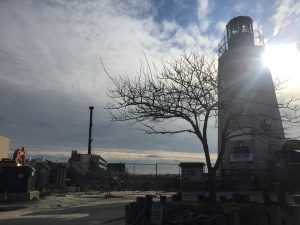 Kind of a pretty shot, but it’s the ugly rubble of Crabbers’ Cove

If it sounds like not a lot got done towards actually finishing the house in the last two months of the year, it’s because we became so focused on the holidays. I told you last time about Christmas. I didn’t even mention Thanksgiving. It was a little hectic, but we got through it, making the first Thanksgiving dinner in a kitchen which did not also double as a workshop and storeroom. To be fair, that kitchen, despite lacking cabinets, a stove and a sink, managed to be used to prepare dozens of festive dinners over the years. It was just a cumbersome process.

We still don’t have a stove, but at least we have a sink and cabinets.

Anyway, we did put a lot of effort into just getting things organized in November and December. Ethan and Jessica moved in full-time. We had bouts of horribly cold weather, and, as a result, batteries died, water pumps split—I think we had at least three vehicles towed somewhere, and got them all back on the road.

And we got Mother out of the house for Christmas. I’ve been very worried about her being holed up here. I know you were comfortable in this house—as comfortable as you could be anywhere—but it’s been a depressing place for a long time. You lived in it like it was a cave, with the window curtains literally clothes-pinned shut, with more curtains hanging in every hallway opening that didn’t have a door, with furniture and equipment blocking the entrance to just about every room. It was like an animal’s den in here. I know that’s just a symptom of your illness, but it took its toll on the rest of us, especially Mother.

So I was thrilled when she said that she would join us at the beach for Christmas this year. She took a room at the Boardwalk Plaza for two nights, so that she could sit by a window and see the ocean, despite the bitter cold. We had Christmas dinner at their restaurant downstairs—a huge buffet. I wonder if you would have liked it? You liked buffets, because you could pick what you wanted, and scowl at the undercooked meat, or the chicken. You hated chicken, I assume, because you grew up on a farm and saw so many of them killed and cooked.

You didn’t like restaurants overall. You always seemed to be in a bad mood when we went to one. I think it was because, at a restaurant, you have to sit and wait for people to do things for you. That wasn’t something you were comfortable with. Nor would you likely have been comfortable with the Church service we attended—which Mother declined, because she didn’t want to go out in the cold. You almost never went to church. I recall one Christmas Eve, either right before or right after Renee and I were married, that you attended with us. You wondered where I had learned the words and music to all those Christmas hymns.

It was a cold and quiet Christmas. Mother didn’t go out much. After her two nights in the hotel, she came and stayed at the house we had rented. She slept in a converted bedroom off the living room, and seemed fairly content, but restless. We brought her carry-in from the restaurants we visited. She did make a trip out to have a club sandwich at the Robin Hood, which was her longtime favorite. And we went for a few drives to see how Rehoboth and Dewey Beaches had changed in the years since she’d visited.

You didn’t like the beach, either. We believe that was because, as a young man who had never seen a beach, you joined the Army Air Corps and were sent to Tinian in the Marianas. The clear waters of the Pacific made mid-Atlantic beaches a letdown. You apparently told Mother you wouldn’t enter the Atlantic because it looked dirty. I suspected you didn’t like the beach because there was no obvious work for you to do.

But we started going, as a family, in 1966, when I was not yet a year old. Relatives in Virginia had told Mother about Rehoboth Beach. She took the three of us kids, plus your mother, who also hated it, for an overnight. After that, we went every couple of years. The relatives who had recommended it never went back, but, by the time I was in college, it had become an annual pilgrimage. Renee and I, and Ethan and Christian, took to going at least twice a year when Ethan was tiny. So it’s a special place to us.

The restaurant where we used to have our big dinner of the week—Crabber’s Cove—was rubble when Mother and I got there to see it. The beach bar across the way, and the decorative lighthouse are still there, but the place where your grandchildren could get a hot dog, watermelon and hushpuppies, plus a drink, for a dollar while their parents splurged on seafood and steak was gone. As gone as a lot of the houses we had rented over the years, to accommodate as many as two dozen of us. Rehoboth is a changing place.

Still, we got out, we had a good Christmas, and we weathered the changes. The biggest change, of course, being that you weren’t there to tell us that you didn’t understand the time we spent doing all these things. “I just look at that, and I say why?” you would have said.

And I wish I could hear you say it one more time.