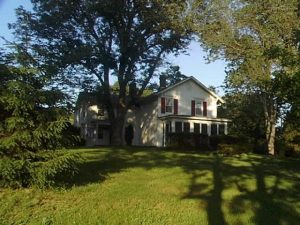 I still have a house, too. I’ve talked so much about yours, you might have forgotten that I don’t live in your house. I’m just there a lot. And it’s not your house anymore, in a legal sense, is it? Legally, it’s Mother’s. Spiritually, you gave up on it long ago, and I’m renewing it now. So I guess there are two houses in my life—our house, yours, Mother’s, the family’s and mine, and my house, mine and Renee’s, anyway.

My house is 148 years old this year. It was 126 when I bought it. You were our home inspector. You checked the foundation, the structure, the wiring, the plumbing. Ethan was three years old. Christian wasn’t born and wouldn’t be for three years. Renee and I weren’t intending to buy a house that day before Christmas Eve in 1995, but there it was. I was on my way to a meeting at the Elkridge Library (now just renovated and re-opened, then just four years old) and I decided to take the back way to get there. I passed this beautiful old house on a hill. Renee was working in real estate, so I called her and said I’d like to see it. She set up an appointment. We went by on the way to the grocery store to buy Christmas supplies. There was snow on the ground.

As we drove to it, I asked her, “What’s the one thing this house could have that would make you say, “I have to buy it?”

“A back staircase,” she said. “I always wanted a house with a back staircase. We pulled into the circular driveway, and, while she fiddled with the lockbox, I looked in the kitchen door.

There was a back staircase.

We toured the cold, empty house and fell in love. It had not been painted or improved since the late 1960s—linoleum, beige tile, dark wood cabinets, avocado and brown appliances. It had two kitchens, because it had been subdivided into two apartments. The basement was pitch black. We couldn’t find the light switch, and neither of us was brave enough to climb down the old, dusty, wood stairs into the yawning chasm of blackness with just a flashlight. A few days later, the late owner’s son, who lived next door, would show us where the lights were, and we’d find a six-foot ceiling and a century-old coal furnace converted for oil.

We were thrilled with the two fireplaces, which, ironically, we have never used. We also liked the wood stove, which we often have used. The house had 19 large windows (our townhouse had seven) some with hand-blown glass, and French doors in the living room.

We were in love. Four days later, we had a contract on our townhouse. The buyer was a nitpicking, chiseling bitch, and we wound up cutting all ties with our realtors (for whom, embarrassingly, Renee worked) but the house was sold and we were (just barely) able to buy the Old Elkridge Hunt Club, its detached, two-car garage, an acre and a quarter of ground, and way too many trees and shrubs. Over the years we’ve learned two things: The former owners were enthusiastic gardeners and landscapers… and we are not.

By the end of February, we were here. Ethan does not remember another house, to speak of. He says he remembers the town house stairs and my office there. Here, he picked his room, and it still holds treasures of his past, even as he’s moved out and lives in your house.

You and I built a deck over the brick-and-concrete back porch. I bought lumber from a supplier recommended by my boss at the time, who had a side business building decks. Ethan fell down the back stairs while we were working and broke his collarbone. While Renee and I took him to the emergency room, you kept working on the deck.

Seven years later, I added to that deck with lumber from Home Depot or Lowes, and we had a pool put in. Over the course of the next 14 years, the pool held up. The deck did not. It sagged in the middle and its boards began to decay. The stair treads and even their supports split. Lower quality lumber, sandy soil into which the rear posts sank, even though I dug down 36″, and my failure to properly support the 18′ joists conspired to make that second deck an eyesore. I should have had you help me design it, but I think, by 2004, you were already moving past such things. 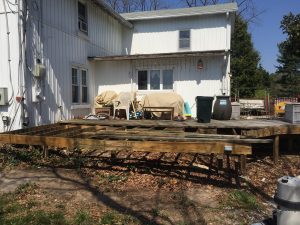 So a couple of weeks ago I began demolition. I put the decks together with screws, thinking I was clever. It will be so easy to remove and replace pieces, I thought.

Yeah, I’m taking it apart with a sledge hammer and a wedge, just as I would if I’d nailed it. Nails would be easier to pry loose. I’ve removed about 35 boards so far, not counting stairs and railings, and I think ten screws have come out intact.

It’s bittersweet, taking down something I built myself. It reminds me that, if you had finished our house, you would have had to do the same as it aged. You dodged that bullet by leaving it unfinished. That which is not born cannot age and die.

My neighbor, Leonard, stood by my side through most of the building of this deck and told me stories about his mother, the newspaper editor from North Carolina, and his Cherokee grandmother who declared that his Japanese wife was part of her tribe. You liked Leonard. You guys would stand in the yard and talk about Carolina and World War II until the sun had gone down and was threatening to come back up again. Leonard’s been gone for almost ten years. His wife, Chieko, just died two weeks ago.

The boys loved the pool, even at the end. But they weren’t using it anymore, and I was cleaning it every other day, buying parts for it monthly, spending a fortune on chemicals. So I took it down this past Fall. And now the deck is going. We’ll put a patio in its place. A fire pit. Maybe a fountain. Maybe a pergola. Things change.

And how much longer will the Old Elkridge Hunt Club be our house? I don’t know. I can’t afford two houses, and yet I have two homes—one where I grew up, two where my sons grew up.

“First World problems,” they call them. Yet they’re problems all the same. Knowing some people don’t have one home doesn’t make it any easier to walk away from either of yours.