I resolved one bathroom ago that I was never going to use all the tile you bought. You had planned what are now called “vintage” bathrooms, in many of which the soap dishes, toothbrush holders, toilet paper dispensers and towel racks were permanently mounted with, and made of the same color porcelain as, all the other fixtures. The pink bathroom will go in as you planned it. It’s a pink bathroom. It can’t be anything but what it is.

We didn’t go that hardcore with the blue bathroom. Jess is going to decorate it in an ocean theme. The walls will be a sea glass green, and the racks and dispensers will be saved for some other project. 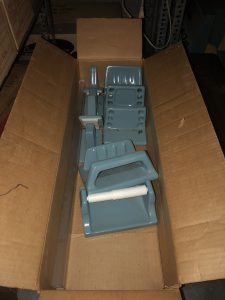 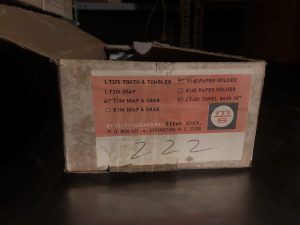 For the green bathroom, you didn’t buy all those extras. The green tile is of a different brand than the rest. It’s Robertson-American, as opposed to Mid-State. 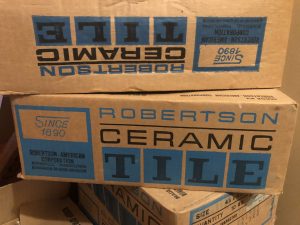 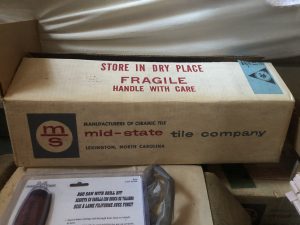 I take that to mean that the green tile (Bayberry, Mike the plumber tells me) was not as broadly available, and no one made all the accompanying pieces. Again, I’m assuming Mid-State didn’t do that color. Nor did you buy the mosaic floor tile that you did for the other bathrooms.

What you did buy is some fancy tile that’s cut in a shape that research tells me is referred to as “lantern,” “Arabesque” or “Moroccan Arabesque.” I vaguely remember you showing it to me. I can only assume you intended it for the floor, as you have no other floor covering here. It’s nice tile, expensive stuff, but here’s the thing—that’s too much damned bayberry green! Green toilet, green bathtub, green, tiled walls, green sinks and a green floor? All the same shade? Okay, the Arabesque tile has kind of a pattern to it with some white flecks, but still… Renee looked at it, shook her head and said, “If you really want to use it, because your Dad picked it…”

I know you changed you mind about a lot of things over the years, so pardon me if I’m not overly religious about your decorating choices from 1968. I’m going to use the green tile, including the fancy Arabesque, around the tub. But I had nine square feet of the woodgrain porcelain left over from upstairs, so I’m buying 30 more and using that.

Forgive me talking so much about bathrooms. You sort of made them my immediate priority. You see, when I discovered that there was no water supply to the house east of the laundry room wall, I knew I couldn’t finish the job myself. I don’t actually like plumbing. Not even screwing on washing machine hoses. That task once left me mopping the laundry room floor for some hours. I can plumb, but I choose not to.

So I asked for recommendations, and was referred to Mike, who’s been in business in Howard County for quite some time. He came out and looked over the setup. Naturally, the first thing he said was, “You’ve got to clean out that basement!” That was already underway. Then he pointed out that your drains—which were all complete, with the sole exception of the green bathtub—would have to be redone. So about 40 feet of cast iron that had been in place for over 45 years had to go. The standpipes mostly did not have cleanout ports, which violated code. Two horizontal sections were perfectly level, and needed an inch of drop per sixteen feet, I believe was the figure. Mike quoted Sir Isaac Newton, which made me smile. Fortunately, you were upstairs and past the point of debating gravity and physics with him.

They even had to replace the pipes in the walls that vented to the roof. Not a big deal for them, apparently, but I thought of all the work you had put in, and all the materials you had bought, some of which were still taking up space in the house.

Me: Why do we own several hundred pounds of lead sheeting?

You: I used it to flash around the vent stacks on the roof.

Me: So we don’t need it anymore?

You: I suppose not.

Me: (Not out loud) There’s enough lead here to floor a large room! We have three vent stacks! Why…? Oh never mind!

We crawled around the attics—some almost as cluttered as the basement, and how in the hell did we get that stuff upstairs? I’ve blanked out the traumatic memories—and found the pipes going out to the roof. Mike also had to extend some of the stacks that terminated near and below bedroom windows.

But before any of that could be done, we had to get a rough-in permit. Mike initially thought we had to get a permit just to get inspected and see what all was wrong. Fortunately, I know the head of County inspections, and he put me with one of his guys, Darrell, who assured me that, if it was finished in 1967, when he and I were both about two, the code would not require it all be ripped out, and we could go right to a permit to finish the supply lines. That was good news. Darrell came out twice—once to see what in the world we were up to, and the second time to approve the roughed in drains and supply lines. On that second visit, he said to me, “Now I’m going to be retiring in the next five years. I’d really like to be the one to give the final approval, so please hurry.”

So now we have a shiny, green license sticker in the basement… 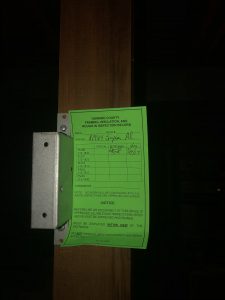 and I have a deadline to finish these bathrooms. It’s actually tighter than Darrell’s retirement. I believe it expires after a year.

You hated deadlines, but, if I’m going to finish what you started, I have to follow them. After all, you already missed the biggest one. You’re not here.