The green bathroom is almost ready for the plumber to come. It’s been quite the task to get there. It’s the biggest of the bathrooms. It adjoins the master bedroom on the first floor. It’s actually subdivided into three small rooms, with a 5′ by 6′ entryway for the sink and countertop, a similarly sized space for the bathtub and toilet, and then a 10′ by 4′ dressing room with an additional sink and space for a dressing table and lighted mirror.

It would have had the most tile. There were seven boxes of standard square tile, seven boxes of the arabesque tile, and then all the trim pieces. I don’t honestly know where you planned for it all to go. I think, based on the fact that you did not finish the walls around the main sink, that you had planned to tile both the bathtub surround and two of the three sink walls. I did not elect to do all that. As I’ve mentioned, I never knew what your plan was for the floor, but I bought porcelain woodgrain for it. 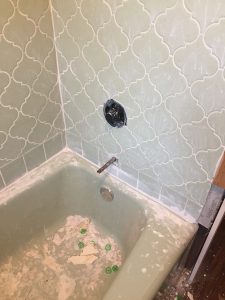 The Arabesque tile around the tub.

All the tile is in. I did not tile around the sink, just the tub surround and the wall behind the toilet. I used both types of tile. Renee is still very concerned about things looking dated, but I think it’s a pretty neutral green. 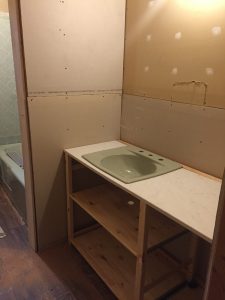 Note the drywall cut above the sink.

The main sink and cabinet went together easily. I did add an outlet above the sink, running a line from the light fixture. That meant cutting a small access hole in the sheetrock you had already installed, but, oh well, that’s what joint compound is for. I found it hard to believe that you had put no outlets at all in that bathroom. I guess you thought one tiny outlet in the light fixture was enough. When that bathroom was designed, we’d never heard of handheld hair dryers, most people did not use curling irons or hair straighteners, and toothbrushes had just begun to come in the electric variety. Mother had a hairdryer, but it was one of those that had a cap to place over your head, and you sat down to use it. Sort of a portable version of a salon chair dryer. You assumed the only appliance that would be plugged in near the sink would be an electric razor.

You didn’t use an electric razor. Well, not until you were very old, anyway. You used a safety razor. I think I touched it once when I was young, immediately cut myself, and swore never to handle it again. When I did start shaving, I just used disposable twin blades. I remember us taking turns shaving in our one, small bathroom back when I was in high school, and you saying, “How can you use that thing without cutting yourself?” And I thought the same of yours.

I don’t think you ever used the electric razor yourself, either. You had two of them, in boxes, and you were shocked that they both went missing among the stacks of papers. They were somewhere in the kitchen or dining room. It was quite the fiasco, finding them, during your last months. You wanted them found and you wanted one of us to shave you. I believe we wound up buying a third one, which you also lost. I don’t know if any of us ever shaved you. I did not. I don’t think either of us would have survived the attempt. Your hospice worker was able to get you shaved. 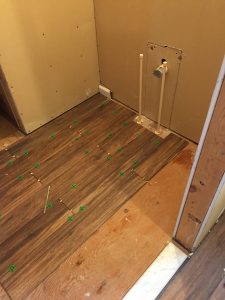 The area for the second sink, with another patch.

I tried to finish the second sink cabinet last night, and realized I had messed up installing the sheetrock behind it. You had left that piece cut, but not attached. It had holes already cut for the medicine cabinet, and for the drain and supply lines you had installed in the wall. We had to remove it to finish the plumbing, and Gary moved the supply lines so that they came up through the floor outside the wall. Since it was an eight-foot tall piece of sheetrock, that meant I had to cut a section of it out to replace it, to allow it to clear the new plumbing. There were no horizontal members to attach the cut piece to, so I had to install some. I cut them too thick, and the wall bulged at that point. I didn’t realize it until I placed the baseboard last night.

So I had to take the baseboard, that cut section of drywall and the wood splices back out, cut new splices, and replace everything. In the course of it I dropped one of the shelves from the cabinet on my bare foot. You would have been scandalized that I was working in my bare feet, but it’s been in the high 90s this week. Even in an air-conditioned house, no one wants to over dress. And I hate shoes most of the time anyway.

I couldn’t help thinking that you would have planned it out better and made a better job of it. Your sheetrock patches would have been cut perfectly straight, whereas mine were cut with a Dremel and are a bit jagged. But no one’s ever going to see them when they’re finished—especially the one behind the cabinet. And I feel it’s fair to point out that your planning phase lasted fifty years.

Mother said last night that my cousin Vardeman, once he had become a professional builder himself, said to you, “Edwin, you need to hurry up and finish that house. The cost of building materials is going up every day.” You replied, “I’ve already bought everything I need.”

You had indeed. But those of us who don’t feel as ambitions about building cabinets and countertops by hand needed to buy a few more things.

PS: The County did send the “vollation” letter, but they as quickly turned around and admitted it was sent in error, and that we were making acceptable progress. That was a relief.

1 thought on “The Colonel’s Plan – The Green Bathroom”