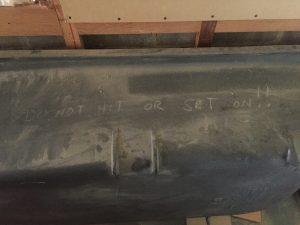 A year ago today, you came home from your last visit to the hospital. You came in an ambulance, because you were too weak to even get in and out of a car. You had a foley catheter, because you couldn’t tend to your own needs in that area any longer. Gilchrist Hospice Services had brought you a hospital bed and a portable toilet. You refused to use that. You also refused to use a wheelchair, even though your doctor had told you it was shortening your life to walk unassisted. You liked the hospital bed—for a few days. Then you got bored with it and wanted your old, broken couch back. Susan and I had carried that out to the garage the day before you came home.

As we began staying nights with you, I began working on the house in earnest. A lot of cleanup had happened before you were confined to a bed in the family room, and it continued. But I put up the dining room door facings that you had been “working on” for about three years. I straightened the French doors that you have never been able to level, because you could no longer concentrate on a problem for more than ten or fifteen minutes. I started finishing Charles’s old bedroom. From your bed, you gave me tips on hanging the closet doors—how to cut hinge seats was something the YouTube videos claimed was easy, but it was not, until you told me the easy way to do it.

It was the first time in your life that you didn’t try to get up and get involved in a project I was working on. You were content to hear about it, and make suggestions. “Ask Charles to help you,” was about as intrusive as you got. But, with our schedules, Charles and I weren’t here at the same time at that point.

You did want to get up and wander around, but mostly to check that doors were locked and that curtains were closed. You had a fit when I took down the curtains you had hung at the entrances to all the hallways and the entryway. They had to go, though, because I was carrying lumber out of the living room and music room, some of it 18 feet long. I couldn’t have curtains hanging in my way. Besides, it was Spring, and neither heat nor cold were issues.

You would live a little over 30 more days. Aside from the last two, you fought your final sleep every minute. You always said you would.

A year later, the kitchen has a working sink, dishwasher, disposal and countertops. It has all its cabinets, and a floor. And there’s nothing in it that should not be kept in a kitchen—no magazines, table saws, old copy machines or oscilloscopes. I still have to build a stove island and install the 50-year-old JennAir range. Renee’s going to stain the cabinets. And I have to order doors for the upper cabinets that you built.

The blue bathroom is finished, except for painting. The music room is empty of all tools, lumber, darkroom equipment and boxes of newspaper. It doesn’t have its second layer of plywood floor or carpet, but it does have a rug, and furniture. The library is a working office. The garage contains only furniture, building supplies, and tools. No surplus. The basement is two-thirds cleared.

I wanted to have more done, but I guess that’s not a bad year’s worth of work, considering where I started.

I cleaned out the master bathroom this past week. I guess that’s its third cleanout. You had left it full of papers, equipment and a little bit of tile. I had consolidated it once, and then Patrick and I had moved overflow books from the library into it. Then I cleaned it out again so that the plumbing could be installed. Then we filled it up again with plumbing fixtures, doors and door jambs, and furniture from the dining room and library that needed to go away. 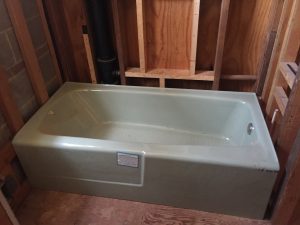 Now I’m ready to lay the tile for the floor, so the toilet and sinks can go in. The bathtub is already in place—that was done with the first round of plumbing. I’m amazed and happy it survived. In good 1960s fashion, you color-coded our bathrooms—beige, baryberry green, regency blue and Venetian pink. You installed the pink bathtub in its place, but the green bathtub you stood on its side in the living room. It stayed there until last Summer, when Gary and Cody finally rolled it into its permanent home.

You had labeled it prominently, in chalk, “Do not hit or set on.” “Set” was your North Carolina-accented conjugation’s present tense from of the verb to sit. I believe you used it as the preterite form as well, and the imperative. It’s funny, because you used to drill us on grammar, but “You set yourself down in that chair,” was a frequent command. Your body also produced “prespiration,” and, as Renee always commented, objects that fell off the table were lying “in the floor.” That was about the extent of the clues to an outsider that you did not grow up in the Mid-Atlantic region. You did not have an accent, that I noticed, and your grammar was considerably better than that of most Merliners who spent their Summers daniation, to get away from Balmer.

I guess we don’t get to control the pieces of our lives that outlive us.