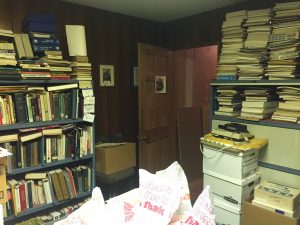 Sometime while I was in college, I believe, the dreaded metal cabinets arrived. These were, of course, surplus. They’re a blue-gray in color, with light gray doors and dusty orange shelves. Only they’re not shelves, they’re cross-bars designed so that wire brackets could be fastened into them, sitting upright. The cabinets were designed to hold reels of magnetic tape and were used for data storage in IBM Mainframe computers in days gone by. We have a few dozen of them, and I’m pretty sure we also have every. single. roll. of magnetic tape. that ever went in them. Well, we did. I’ve sent a lot of them to recycling now. But there are still hundreds in the basement.

You thought these cabinets were the best thing ever. You were going to cut shelves for all of them, and use them instead of building any other cabinets for the house. The library got five of them. The kitchen got three. The general purpose rooms got six or so, and you lined them up in the hallways, too. And then, of course, you filled them. And then you stored things on top of them. And then you started to build out in front of them, blocking access to them with boxes, lumber, sheets of glass, plywood and Lexan.

You never built shelves for the ones in the library, but you still balanced books and magazines and instrumentation manuals on the orange cross-bars, so it looked something like a library in here, just not anything like the Jeffersonian gentleman’s retreat you had always described to me. And, of course, once the books were in place, you started filling the space in front of them—with small meters and gauges, VHS tapes, tools, bullets and shotgun shells, framed pictures, coils of wire, glass petri dishes, funnels and pipettes… There were also, everywhere, rolls of Prestape. That’s the kind of thing I used to use in my days as a student journalist. I have no idea why you needed so much of it. For technical presentations, in the days before PowerPoint? [Note to self – write about the Colonel’s first power-point presentation] Or did you buy it because I might need it? It’s possible. You did things like that, and then never told the person for whom you’d bought the thing that you had, in fact, bought it.

That was just you. 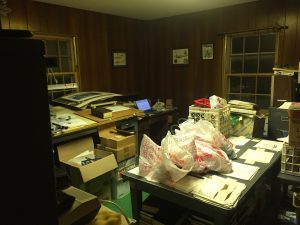 By the time you died, the library was literally impassable. You had brought in a drafting table, which no one could get to, much less sit in front of. Stacks of books and papers filled every available inch of floor space, and towered toward the ceiling. Under all of the paper, I knew there was a military grade steel table. I did not know that there was another IBM data unit and its attached desk, an oscilloscope on a cart, and at least five other large pieces of equipment. There was a missing breakfast room chair.

Somewhere in those last years, you’d started building the model of Rickenbackers Spad XIII that I’d bought you back in the Seventies. I know you’re the one who started building it, because, in the box, there’s clear tape, a spool of thread and a roll of twine. Those storage non-sequiturs are your signature.

There were so many magazines! During your last decade or so, you became addicted to trying to win the Publisher’s Clearinghouse Sweepstakes. As part of that, you subscribed to dozens of magazines. Maybe you thought it would improve your chances of winning. Maybe you just didn’t believe in getting something for nothing. In any event, all those magazines came into the house for 15 years, and they never left until we carried them out, unread.

It’s taken me most of a year to make any sense of it. On March 31st, 2017, you went into the hospital for your last visit. You did come home, but it was the last time you would go to the hospital. I’m not reminding you of something you necessarily know, because you were halfway unaware of the process. That day, Mother had called me to say that you had been unable to get up off the couch on your own. She and Patrick had had to lift you. I realized that the time was really coming that she was going to need help with you. I called to check into hospice care, but, before I could make any progress, Mother had found a huge, hard mass in your abdomen. I said to call 911, and to have the paramedic call me upon arrival.

You might think I was a bit cold about this, but I had two points to discuss with my colleague when he arrived. First, did you need to go to the hospital? You were terminally ill, and the only care you needed was for your comfort. If this was, as we suspected, an aneurism rupturing (it was not, but you did have one in your abdomen, that you had known about for years) then did we let things just take their course, and where did we do that? The second point was that I was determined that Mother not accompany you to the hospital. She had been through enough, physically and emotionally, and enough was enough. During your last visit, an E.R. nurse had made it clear to her that they expected her to sit up all night, watch you, and restrain you if you tried to wander. She was not up to that task. I was determined that, this time, the professionals not have her for a crutch. If someone was needed to stay overnight, it would be one of your children.

The mass turned out to be your bladder, which you had forgotten to drain with a catheter, as you had been doing, proudly, on your own, for 14 years. Mother was told that she did not need to ride with you, and we would meet you there. During that stay, which lasted until the next Tuesday, we arranged hospice care for you, and discussed whether skilled nursing was required. You were no longer able to drain urine by yourself. Your doctor finally advised, grudgingly, a Foley catheter, which the patient cannot remove without tearing his urethra. (And yes, you threatened to do just that, at least once!) You were too weak even to have a permanent catheter port implanted.

Also during that stay, we all agreed that Mother was never going to be alone in that house again, not even alone with you. I think we all knew that we had let that situation go on too long. She was completely mentally alert and capable of caring for herself, but her mobility was limited, and you were no longer any help to her physically. And, when you came home, she would need help with you. You were going to be in a hospital bed.

So we set up a rotation of staying the night. I began taking a day off pretty much every week, to get things moving forward in the house. Working in the same place for 30 years has perks when it comes to amassing leave time.

Being there that much, I needed a base of operations for my work—both professional work and the business of planning the house completion and making legal and financial arrangements. Funeral arrangements would be added to that list. Mother’s office was also where she slept, and none of the upstairs rooms were yet clear. So I decided the library needed to be put back in service. I cleared a narrow path to the desk and space for the chair to move, made sure there was access to the electrical outlets, got fiber Internet installed (at long last) for the whole house, and we set up a calendar to track who was staying and when your (many) doctor’s appointments and caregiver visits were scheduled.

Patrick cleared off your desk, although, the state things were in, that largely just meant moving the stuff to the drafting table or the center table. That was a lot of the challenge of making sense of this house, at first. There was so much stuff that there was no room to move. So first we took all the magazines and newspapers to the recycling bin, or the rented paper dumpster we had in the driveway for a month. Then we boxed up a lot of stray books. Patrick cleared the metal cabinets of books, because he knew I wanted to replace the cabinets with real bookshelves. Unfortunately, I had to fill them again to get all the software and equipment manuals off the floor. There were probably a thousand of them, and these were in addition to the ones filling the four filing cabinets in the corner.

I managed to clear one corner and add a recliner for more relaxed work.

Now the center table was clear for sorting. After sorting through about a dozen boxes of papers and tossing 90% of their contents, I had a walkway all the way around that table, which had not existed in at least twenty years. I found the missing breakfast room chair during this cleanout. Now I have five bays of bookshelves (filled!) with more on the way. The filing cabinets have moved (temporarily) to the living room or permanently to the basement. They’ll hold the equipment manuals and hardbound electronics catalogs while I decide what to do with them. Some of those specialized catalogs sell for $25 on eBay, so we may try that. I contacted a museum in California about the manuals. They said, “Send them to us!” Not sure they’re comprehending the sheer volume of your collection.

The drafting table isn’t quite usable, although I’ve made a corner to work with your blueprints for the house. I still have about thirty boxes to go through, but that’s taking care of itself. It’s becoming a usable office and library at last. I still have your desk set up with a lot of your personal items.

And I wonder—Is it wrong to use a petri dish for a coaster? I’m pretty sure it’s clean.