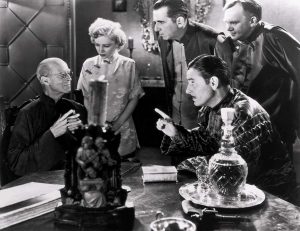 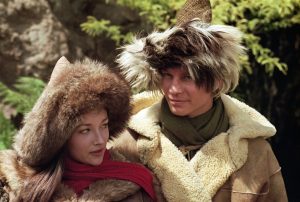 I’ve read Hilton’s book more than once, and recently listened to a BBC Radio adaptation of it, starring Derek Jacobi. There are significant differences between the book and both films, and I still prefer Capra’s vision of Shangri La to the book’s. Critical pieces pass from book to film, however, notably Mr. Chang’s statements on how Shangri La is governed, and the High Lama’s visionary speeches about the future. Screenwriter Bob Riskin, a very, very gifted wordsmith, lifted Hilton’s important words almost untouched for these segments.

The core of the stories is thus the same. Riskin modified characters—turning the missionary, Rose, from Hilton’s book into the prostitute, Gloria, which added texture even as it eliminated a subtle clash between Eastern and Western religions. He also turned Mallinson, the impetuous young vice-consul, into George Conway, brother of the protagonist. This was probably done to give Diplomat Bob Conway (Hugh in the book) a stronger tie to the outside world, and thus a more credible reason for leaving Shangri La at the climax of the story. Indeed, one must read two paragraphs of the novel very carefully to discern the reason why Conway, who is delighted with Shangri La and has just been appointed its new High Lama, suddenly decides to accompany his malcontent friend on a dangerous attempt to return to “Civilization.” In the book, it’s simply that he decides that Mallinson’s claim that Shangri La is a lie is more believable than the High Lama’s lofty vision. (He learns later, in ghastly fashion, that he’s wrong.) In the movie, well, this is his little brother. (Sorry for the spoilers, but it’s called “Lost Horizon” for a reason!)

Riskin also created the fussy character of Alexander P. Lovett, a paleontologist, to contrast snobbish civilization with the simple life of Shangri La, and Sondra Bizet to serve as a love interest for Robert Conway, because a movie needed a love interest in 1937. Of less importance, except as an example of 1930’s white-washing, is that Riskin turned Chinese Lo-Tsen, a girl who did not speak English, into the Russian Maria, who did. The two characters served the same purpose as malcontent residents of Shangri La, but presumably it was easier on film to have that resident be able to communicate without a translator.

But putting aside the drama and the romance, the power of Lost Horizon, for me, is the gentle philosophy it espouses, a philosophy which no doubt made it resonate for a populace which still remembered the utterly pointless World War I, and which lived in dread of another war as fascism took hold of large portions of the world. It’s a philosophy that bears remembrance today, as not only nations posture and threaten each other, but identity politics tells us that we are enemies merely by virtue of race, sexual orientation or gender identification, and too-powerful political parties shriek that we are immoral if we don’t choose one of their sides in battles between disappointing candidates.

We’re in a world of hurt in 2018, as we were in 1937, and in neither situation was choosing one side, and then forcing everyone who was not on that side to fall into line, going to be the answer.

“We believe that to govern perfectly it is necessary to avoid governing too much,” explains the poised Mr. Chang, who serves as Conway & Company’s welcome committee to Shangri La. His statement comes in answer to Conway’s question of how things are organized politically in the tranquil Valley of the Blue Moon.

Conway goes on to ask what moral belief underlies their society, in the way that the Protestant Work Ethic underlies his own.
Chang says, “If I could put it into a very few words, dear sir, I should say that our prevalent belief is in moderation. We inculcate the virtue of avoiding excesses of all kinds—even including, if you will pardon the paradox, excess of virtue itself.”

It’s important to note that at no time does Chang suggest that Shangri La is a democracy or republic. He makes it pretty clear, in fact, that an elite rules it.

“In the valley which you have seen, and in which there are several thousand inhabitants living under the control of our order, we have found that the principle makes for a significant degree of happiness. We rule with moderate strictness, and in return we are satisfied with moderate obedience. And I think I can claim that our people are moderately sober, moderately chaste, and moderately honest.” Riskin modified this passage slightly, adding “somewhat more than moderately happy” in place of “moderately sober.”

And the people we meet, especially in the film, don’t seem like the type to attend political rallies, or even go out and vote. Nor do they seem to object to any scheme that their new visitors come up with for “improving their lives,” from building an irrigation system, to taking over teaching their children, to holding Christian missionary meetings. One assumes that this is because, in the absence of forceful governance and majority rule, one doesn’t need to fear what others do.

We need moderation today, and not just on the national or international scene. Moderation in governance also means moderation in governing ourselves, not riding around on moral high horses, for instance. Riding a high horse makes you more likely to hit your head on something, and also makes people around you write you off as an intolerant prick. As Jimmy Stewart once said the Margaret Sullavan, “You may have beautiful thoughts, but you hide them. As far as your actions,
you’re cold and snippy like an old maid.”

A somewhat sexist sentiment in 2018, but Stewart’s character was invoking the archetype of someone who devoted an entire life to being so morally correct that she never got her hands dirty and lived. Gender stereotypes or no, the world is loaded with people like that.

Moderation in governance also means giving others a break. It’s not up to you to run other people’s lives. If their actions aren’t hurting you, leave it alone. Let them make their mistakes, and maybe they’ll leave you to make yours. And no, people’s voiced opinions, informed or otherwise, aren’t hurting you. If you try to censor those opinions, you’re not only showing your fear, you’re giving them more credence than they probably deserve. Let them cast what they want into the laundry of ideas and see what comes out in the wash.

Shangri La is a happy place. Surely no one person, let alone someone who writes for a living, is smart enough to design a whole political or social system alone; but Hilton gave us a glimpse of something an awful lot of us wish for: peace, tranquility, long life, and love, with no guns going off and no fingers being waved in our faces. There’s a reason that vision was so popular. His story may not have all the answers, but at least it asked the right question—how do we get there?