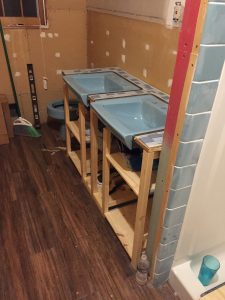 Aside from doing the joints and painting the walls, the blue bathroom is finished. All the plumbing and electrical are in place and working. I had a little snag this weekend, as I finished the electrical work. I once again had it rubbed in my face to check line voltage before putting in drywall. I think I get it now. Hopefully I won’t have to be reminded a third time.

You had left two wires dangling down from the attic, inside the wall on which the sinks were to be installed. I knew one was for the light fixture which you had already purchased way back in the day. What was the other? I assumed it was for an outlet.

Of course, as I think I’ve mentioned before, there was no room for an outlet over the sinks. You had purchased a mirror that literally took up the entire wall over the counter, from just below the 16” allowance for the light fixture, all the way down to the 32” standard height of the countertop. I guessed that you had been planning to shift the outlet either into the shower wall (sounds dangerous!) or over the toilet (not much better.)

But I went ahead and wired the white Romex to an outlet box, and the silvery-jacketed cable (what do you call that stuff? I’ve always thought of it as “snake-skinned.”) to the light box. I buttoned up the wall, made a hash of cutting the outlet holes in the sheetrock, and called it done.

This weekend, when I installed the switch, the outlet on the opposite wall, and the light fixture (which actually is a nice, sleek design and doesn’t look all that dated), I expected that the throwing of the breaker would bring light.

It did not. No light.

So I had to kill the power again, take the light loose, and check continuity. Yep, when the switch was open, the black wire in the light was continuous to the black wire in the switch, but the white wire (which should have been painted black under code, I believe) had none. When I threw the switch, there was continuity. The light should have lit. I knew the bulbs were good, because we were out of bulbs and I’d scavenged them from my bedroom lamps. So I turned the power back on and checked the box for voltage. None. This sounds familiar, right? The dishwasher all over again. So I crawled up in the attic—thank you for not using blown-in insulation! As it was, I must have gotten a stray fiber near my eye and itched for hours. I found the silvery wire and followed it from—Susan’s bathroom to the blue one? But Susan’s light worked, so it had power. Wait—that wasn’t Susan’s bathroom! That length was running from one blue bathroom wall to the other.

It was a switch cable. I had wired the light to the switch and they both had no power. The second wire was to provide power, and there was never intended to be a second outlet. And the silver-jacketed cable is what you used to run to the switch, so that you knew which wire was which. Got it.

And now I had to open up the wall again.

Have I mentioned that I hate cutting drywall? You tried to teach me how to do it, and you were so good at it! You could cut off a ½” strip of the stuff, eight feet long, and leave it intact. I can barely keep a foot-wide section from snapping in half when I handle it. So I was unwilling to dig at a section of the wall with my lamentable knife skills. I looked up online how to best remove already-hung drywall. (the verb is “to Google,” and yes, I’m aware that was an esoteric mathematical term, and they had no right to steal it the way they did.) I learned that a rotary saw is the thing. And then I learned that a Dremel, which I’ve wanted for years, functions as a rotary saw and costs only about 10% more. So I bought a Dremel. Renee was amazed you did not own one, but I suspect they were a bit too newfangled for you.

I sliced out the wall—not perfectly, but easily, and well-enough that it can easily be re-attached. I ran a line from the outlet to the light box, keeping the outlet in place, and wired the switch only to the light. Now I have light, and now, for the first time in 40 years, one of the light fixtures you bought so long ago has been placed in service.

And I have two more bathrooms to do. You’ve already wired Susan’s, and I promise not to put up wallboards in the master bath until I’ve checked all the wiring. That one has four fixtures to install, because you bought a mirror and sconces for Mother’s dressing room. (I hope you don’t think it’s sacrilege that Renee and I might make the dressing room double as a kitchenette. It just seems more practical.)