It’s been almost two weeks since I wrote. I’m trying to balance my desire to keep up this project with my desire to stay healthy. Every day I put 20 things on my list of things to do today, and I get about 15 done, if I’m lucky. I’m trying not to beat myself up about those five or so undone things, but they do pile up.

The week of the 16th, I had four doctor’s appointments (not all mine—one for Christian, one for the cat) and twelve scheduled meetings. Fitting all that in was exhausting and left me very little quiet time during which I was still conscious. So no writing was happening.

And then came the very disruptive event. Lazarus, my cat (the one whose name Mother can never remember, so she alternately calls him “Nehemiah,” “Jeremiah,” and “The Biblical Cat”) fell ill very suddenly. We spent the weekend believing he had terminal cancer, and then the week after scrambling to keep him healthy. He had acute pancreatitis, and it seems we had the vets intervene just in time. He is now recovering from what was a dangerous, life-threatening attack. I still have to medicate him—grinding up steroid tablets, mixing them with water, and shooting them down his throat with a syringe. I had to do that for you with morphine tablets in those last days. I’m glad that, this time, I was not caring for someone who was terminal yet.

All of my writing since last Saturday was devoted to telling the story of coping with Lazarus’s illness. I really have become addicted, I suppose, to putting my thoughts, feelings and experiences into writing. I guess it helps me evaluate them, at a distance–more dispassionately.

When I left off, I was telling you about Thanksgiving, 2015. I don’t think you were aware of too much that was going on at that point. And now I realize that it wasn’t 2015, it was 2014. I just checked my calendar, and realized that the hoarding symposium I attended after we started cleaning up your house was in December, 2014. 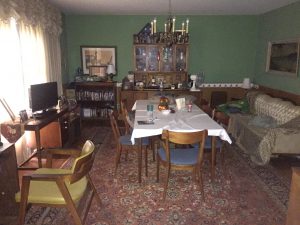 The dining room, post-cleanout. Still a little cluttered, but usable.

Anyway, it was Thanksgiving, and we were getting ready to eat dinner. The dining room was, to put it bluntly, a pigsty. It was almost impassable. There were narrow walkways all the way around the table, but that was it. In one corner, you had an exercise machine—I guess it was some sort of stepper. It was obscured by file storage boxes full of video tapes, three rows deep. The doorway leading from the kitchen to the dining room likewise was lined with file boxes, stacks five high. I remember telling you that, soon enough, you or Mother would be in a wheelchair, and would want the ADA-recommended 30-inch clearance in all your doors and hallways. You had left us about 18 inches. All around the room were more boxes, stacked on top with magazines, junk mail and loose videotapes.

In the kitchen, which still had no bottom cabinets, you had long ago rolled in military surplus metal carts to take the place of the cabinets you had yet to build. You had planned to do all the woodwork in the house yourself—kitchen cabinets, laundry room cabinets, shelves, vanities, countertops—all would be made by your hands. You managed to finish the laundry room cabinets and counter, and the top row of kitchen cabinets, in 50 years. None of those cabinets had doors, either. And, to be fair, it wasn’t 50 years. You stopped working on the house in 1988, and those last ten years before 1988, your efforts were not continuous.

The kitchen, by Thanksgiving, 2014, was no longer passable. It’s a big space—25 feet long and about 13 feet wide. It has two double windows and includes a breakfast area. Almost all of this you had filled. Because Mother was having trouble lifting things out of the wall oven, an extra microwave cart was parked in front of it. Because she was having trouble lifting things out of the microwave, an old computer desk was set up in front of it, and a chrome shelf in front of that. Anyone wanting to use the microwave had to lean over about three and a half feet. Anyone just wanting to walk through the kitchen had to shimmy through an 18-inch space in front of the oven, or an 18-inch space between the cart and the kitchen table.

Ah, the “kitchen” table. You had one, a beautiful enamel table with two side-leaves, the kind that now sells for $350 in antique stores. You and Mother had bought it in Bristol, TN for your first apartment. It’s still in excellent condition, because you had put it over on the side and covered it. Mother used it for open-air storage of literally hundreds of mismatched pieces of Tupperware and Gladware, because there was no room for them in the cabinets. The cabinets contained some dishes, but largely medical supplies, batteries and light bulbs, and lots and lots of paper products.

What served now as a kitchen table was an old metal military map table, of which I think we own about 15. Under it were stored a few old televisions, a small table saw, and four tool boxes. Another exercise device was beside this, blocking access to the tool boxes. You used it to hang clothes. Next to that was a black plastic shelf containing odds and ends. So the kitchen table was accessible only on two sides, since you had stacked boxes on the far side, and made a little alcove for a chair where you would sit and cut your toenails. Littered around this chair were step-stools and boxes holding all of your foot care tools, band-aids, and medicines.

Beyond the kitchen table, in a space defined by that black shelf, was what I can only describe as a mountain. Its surface was composed of newspapers and magazines, but within its core were two photocopiers, at least four televisions, a dozen VCRs and the breakfast table and chairs we’d purchased back in the 1970s. This roughly 225-square-foot area was one mass of junk. Somewhere behind it was a kitchen door to the outside, unreachable, and blocked on the other side by more debris.

A kitchen that would fit only one or two people at most. A dining room in which no one could move if people were seated at the table. And we were supposed to be eating a family dinner. Thanksgiving, 2014, was the day I decided I’d had enough.