Two weeks ago, I wrote about The Thing out in the yard by the basement door. Last week I actually had hazmat experts come out and test it. I had asked a couple of people—our eCyclers, my friend Bob who runs a computer museum, the CEO of the National Electronics Musuem—what The Thing might be. They didn’t believe Phillips’s claim that it was a condenser that only held water. They were pretty sure it contained PCBs. Some of us also vaguely remembered that the reason you kept The Thing outside, sitting on its own special pallet which you had constructed, was that you feared it contained PCBs.

Turns out it’s a 50-gallon energy drink. Seriously. The lab results came back, and the fluid within is composed of saccharine, caffeine, lactose and water. So, basically, it’s a giant steel Starbuck’s beverage. Why the fluid is bright green when it freezes and oozes out is anybody’s guess. But I’ve been told I can cart it to the landfill and tell them it’s not a hazardous material.

Progress on the house was slowed this week by a Nor’easter, “Winter Storm Riley.” We’ve been told in the Fire service that Winter storms are not officially named, but the media certainly haven’t gotten that memo. Winter Storm Quinn has dropped a couple inches of wet snow on the house overnight, but its big brother Riley brought winds which shut down power for something like 60,000 people in Maryland. The last time this house lost power, it was out for six days. You, of course, weathered the outage right here, without water and without heat. I convinced Mother to leave and stay with in houses which had heat and light until the power was restored four and a half days later.

But I did get almost all the tile finished in the blue bathroom last week. I have four corner pieces left to cut for the trim around the shower, and then I can grout and call all the blue tile finished. Although I may pop out two pieces by the door and shave the drywall under them, because they’re sticking out about an eighth of an inch. I’m sorry to tell you that the wall around the bathroom door and going into the shower cubicle is anything but perfectly straight.

So, nothing dramatic has changed lately. I’ve done lots of “catch-up” things. I’ve added the door stop, door and window facing for the bathroom, installed the doorknob (after replacing the hole saw which fits the door knobs you had already bought. Am I surprised that just that one was missing from your set?) I’ve cut all the baseboard. Today I’m going to run some brush to the dump, which the boys cleaned up weeks ago. And I’ve got some downed limbs in the driveway to throw in with them.

Work here is divided between construction and cleanup. Sometimes the cleanup has to happen to make room for the construction, sometimes so that we can find the tools and materials needed for the construction, and sometimes so that we can keep our sanity and have the energy to keep moving forward. So, Renee and I have put in a lot of hours cleaning up the living room, the last outpost of your, er, creative method of storage and organization, where a lot of your tools and supplies are still buried.

On the “energy to keep moving forward” front, we’ve also done a lot in the library.

How many houses have the word “Library” written on the blueprints? Well, this one does. It’s a 14′ by 14′ room on the Northeast corner of the house, adjoining the living room and connected to the back hallway. You had always told me that we would build in shelves, floor to ceiling, on every wall. We would catalog our books and shelve them in order. I started cataloging them, in fact. I believe I built a card catalog of a few dozen entries that included your McGraw Hill Science Series and a couple of others. The librarian gene is apparently a pretty strong one.

For nearly all the years I was growing up in the house, the library may have contained one bookcase—probably the one you cut and assembled yourself, but never glued. It now lives in Ethan and Jess’s room. 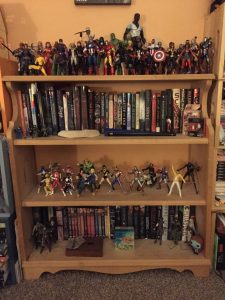 The hand-made bookcase that was never finished. This and several other photos courtesy of thefigureinquestion.com

Before I went to school, I used the library for a playroom. My friend Diane from “next door” would play games with me there.  (Her house was a quarter of a mile away, but, in the old days on Simpson, “next door” was relative.) It was sunny during the morning and daytime, and, being at the other end of the house, it made it less likely that we would be noisy and disturb the adults.

At that point, the ceilings weren’t in, so anyone in the northwest side attic could look down through the joists and see what we were up to. I don’t know who in their right mind would want to look through ceiling joists and watch a four and a five-year-old play “Go to the Head of the Class,” or whatever we were playing, but my siblings apparently found it endlessly amusing.

I can’t put a date on when the ceilings went in, but the library is one of only five rooms that you left in a state approaching “finished.” Susan says she did homework in here during high school. She graduated in 1973, so you must have done it before then. Probably in a burst of energy after you returned from Thailand in 1969. 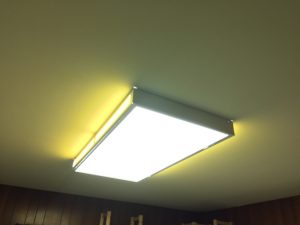 You put up Mahogany paneling, and a truly ugly fluorescent light fixture that, in 1973 I thought was high-tech. I guess you did too. But it’s ugly, especially now that it’s yellowed with age. Okay, maybe not ugly. Now, looking at it, I’m feeling a little sorry for it. 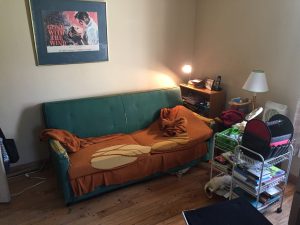 The sleep sofa has seen better days. It’s now in the basement, but this was it, right before we moved it out of my mother’s office. 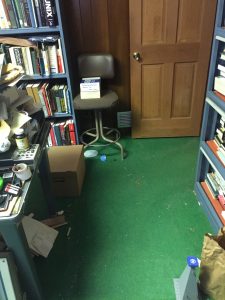 The green carpet. This patch of walkway took days to clear.

You put green carpet on the floor, that Renee swears is indoor-outdoor carpeting. It’s not. I’ve tried to explain to her that, in 1973, grass-green carpeting was the height of taste and dignity. I don’t think she believes me. You moved your wooden desk in here, and, once the guest room was set up as a bedroom, you added the sleeper sofa. 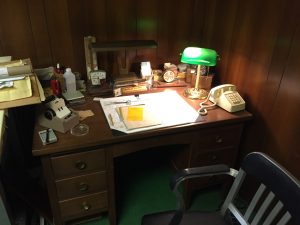 The desk, with the vintage fluorescent lamp (dark) in the center. I added the green lamp recently, because I really dislike fluorescent light.

You moved your desk in here.  I don’t know how old it is, but I know you bought it used. Mother says you refinished it in the back yard of the house on Keebler Road in King of Prussia. It’s an attractive, solid, two-pedestal desk which has always held your fluorescent desk lamp. I ultimately plan to put it in the living room with the Remington Rand typewriter and some of your books.

When I was in high school, you acquired an IBM Selectric typewriter desk—heavy sheet metal with a hole in the top for the typewriter to drop down into. I wrote my book reports on that typewriter, and, the Summer of my junior year, started my first novella on it. The typewriter gave out before I did, so I finished the novella on Granddaddy’s Remington Rand manual. 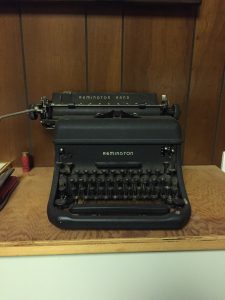 This Remington Rand typewriter belonged to my grandfather, Dawson Briggs. It got my mother through grad school and me through my first major work of fiction. The shotgun shell in the background did not figure in either endeavor, but there are many of them on the shelves of the library

That was in the days before I could just go to the basement and grab a spare Selectric from your stock of dozens. We wound up with three or four of those desks, too. The one that was in the library went to the guest room, which had become my room, when it became Mother’s office in 1983. I disassembled it and carried it out a few months ago. You would have been furious. You never disassembled things for transport and storage. I guess you thought it was unmanly to break heavy objects down into sections that a mere human could carry without risk of grave injury.

That was about it for furniture for a long time. Again, I think there was one bookcase. It was an airy, light, comfortable room where I could lie on the couch and read for school. Not a long-term memory, as I only started reading for school in 12th grade. Before that, I never read a book for class, I just wrote my reports and papers from context of class discussions.