The first definition is right up your alley. In physics, entropy is “a thermodynamic quantity representing the unavailability of a system’s thermal energy for conversion into mechanical work, often interpreted as the degree of disorder or randomness in the system.”

In colloquial speech, it’s “a lack of order or predictability; gradual decline into disorder.”

When I decided, last week, to talk to you about entropy, it was with a more hopeful frame of mind that’s lost to me now. Now I just feel beaten down.

According to the second law of thermodynamics, the total entropy of an isolated system never decreases over time.

Entropy has been demonstrated with the example of a campfire, which burns wood and releases heat. It’s been compared to the fact that children with high energy need a lot of space to run around, but adults, with lower energy, are happy to sit in a corner.

Energy spreads, is another definition.

I guess why this house and its state makes me think of entropy is that it plunged toward disorder. And all the energy you expended bringing it to disorder—is that an example of entropy?

Today one of the staff from Morehead State University—a man you worked with about 30 years ago—came up from Kentucky because he had heard about your collection, and he was looking for equipment to use to train his space sciences students. He needed signal generators and analyzers, wave guides and the like. You had an abundance of those. 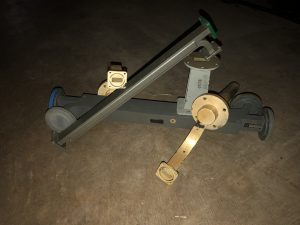 To the recyclers I’ve been working with, wave guides—long, flattened tubes which direct and channel energy, like plumbing pipes with rectangular cross-sections—are so much scrap metal. To Jeff they were gold. Okay, they’re mostly brass, but still… He was happy to get them. A lot of that kind of equipment was in cabinets that, when you were alive, you asked me to keep closed when the recyclers visited. You felt that equipment was too good to get rid of.

I hope it’s found a good home with someone who will use it for what it was designed for and will use it to train young people.

Jeff’s family made the road trip with him—his wife and a teen son and daughter. I told them I felt their pain, traveling hundreds of miles on a hot day, just to haul junk out of a basement and then pack it into a trailer. You and I made many of those trips. You and Charles, too. And my cousin Stuart sometimes joined in.

The one I’ve never forgotten was Sacred Heart Hospital in Cumberland, where I saw the inside of an operating room for the first time. I was surprised to discover that, without doctors, nurses, anesthetists and patients, it was just a dusty, ugly green room with blood on the floor.

But there were lot of trips, many miles on hot days. And, sorry to tell you, you weren’t as pleasant as Jeff was about handling all that junk.

You know… I’m tired tonight. Tired and angry about things. I usually write these entries first thing Wednesday morning, after spending the night at the house. But it didn’t happen today, because I kept getting interrupted. I’ll write more later.

Entropy. I feel like my writing is descending toward disorder. I feel like the energy is dissipating in directions I can’t control. I’m not sure what I’ve written about already.

By next week, it will have been a year since you left us. Left us two houses, probably a dozen cars (most not running) and, well, a big mess. Much has changed since then. Christian has gone to college. Ethan has moved home and is living in your house. Renee and I live alone together for the first time in 25 years.

And, of course, your house looks very different. The kitchen is almost finished. Half the cabinets need doors. The other half need to be stained. I still have to build the stove island and put in the stove. But it has a floor, it’s painted, it has a sink, a dishwasher, a new refrigerator with an automatic icemaker—I had to push that last with Mother. She thought that would be a lot of trouble to maintain. I’m getting ready to take down the wreckage of your old, four-tube fluorescent light fixture over the kitchen table. It has fallen apart over the years. I’m going to replace the breakfast room light. You took the glass off to replace the bulbs ten or twelve years ago, and you lost the hardware that held the glass in place. 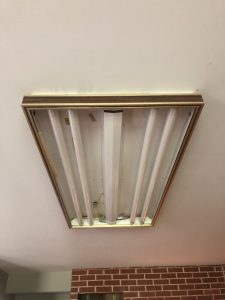 The kitchen fixture was by Thomas Lighting, as all the lighting in the house was, I think. They’re out of business now, and I still have a few dozen of their fixtures boxed up, unused. The kitchen one had a big, plastic, drop-down cover over the tubes. It turned yellow, then brittle. Then it fell. Thomas being out of business, there was no replacing it. You tried, though. You bought about a half-dozen panels meant for fluorescents in drop-ceilings. They were all too small to fit the frame. Then the ballast went out. You bought new ballasts. They were all too big to fit the slots in the fixture. You were going to re-fashion the sheet metal so that it could hold them, as opposed to, I dunno, buying ballasts that fit.

After years of a droplight illuminating the kitchen, I found an old fluorescent fixture upstairs. It was rusty and ratty, but I had a memory of a conversation, from one of our last junk runs.

“An old fluorescent fixture? Why? It’s rusty and ratty.”
“Yes, but I bet the ballasts are good. We can use them.”

I grumbled that day. I grumbled some more when I remembered the conversation, checked the ballasts, and found them, not only good, but the right size for the kitchen fixture. I brought them downstairs and started wiring them. I got interrupted, and Dawson finished them.

Let there be light.

Now, mind you, you had removed one of the three-way switches, and, even though Dawson wired it back the way it looked like you had had it, it doesn’t work. Fortunately, you left behind a wiring diagram for it. (No, readers who aren’t my father, I’m not kidding.) I can get it fixed soon enough.

With the lights back, you wanted to use one of those lens panels you had bought. I could not, for the life of me, convince you that they were too small to fit in the frame. We broke two of them while you attempted to position them “just right.” Then you asked me to find you some very small sheet metal screws, so you could drill holes in 1/16″ plastic and screw it into the frame. I assured you it would not work. You assured me, as you often did, that you were an engineer. I never doubted that you were on engineer, only that those screws would do anything but shatter the plastic.

Worn down after an hour or more of trying to “help” you do a ten-minute job, I went to find screws. You went to take a nap. You slept the rest of the day, and I added cardboard extensions to the lens panel and put it up. It lasted about two years, and then it, too fell apart. It was probably 20-year-old plastic, after all.

We have one more bathroom than we did. It isn’t painted yet, but it’s got everything else. The music room has furniture instead of storage. We have two finished bedrooms upstairs—just three more to go. Your library is usable, and holds bookshelves now where it used to have file cabinets and magnetic tape storage. The back porch is empty of everything but lawn furniture, one cabinet, and a chest freezer. Charles says that’s awfully hillbilly, but I protest that it runs. Some of the finest people I know have a freezer on the back porch.

A freezer that runs.

And, of course, the basement is more than halfway cleaned out. And we have central heat and air conditioning.

What we won’t have, if we’re not careful, is water.

Next week, I’ll talk to you about the well.