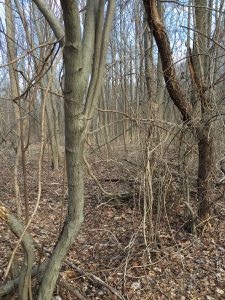 Trees. Not spectacular, but we have a lot of them.

This morning I walked the back property. This house sits on 13 acres of mostly wooded land. When you bought the land, it was just a field with maybe a dozen trees. The Simpson family had used it for farming, and it had presumably been kept clear for decades. Since then, trees have grown up everywhere. I was reading up on tree growth after my walk. In 40 – 45 years, 192 trees in excess of 85 feet can be found per acre of wooded land. I wonder how many we have? None of them look that tall.

A few years before you died, I arranged to have the trees harvested on your land in North Carolina. That’s a forest that’s been a forest a long time—probably your whole life. Our land there used to house a sawmill. The logging trails are still there. We were paid about $2200 per acre for the harvested wood. This lot may not be worth harvesting, to a lumber company, but I think I’ll find out. The money is less of a goal than having a more manageable woods back there. As it is, we have an okay walking trail all around the perimeter, but I’d love to be able to have a nature trail, and perhaps have the clearance sufficient to allow horseback riding. Right now, a walker has to dodge a few vines and low-hanging branches.

There are more houses than I remember near the property lines. There were only two when I moved out, on the East side of the property. Around the time Ethan was born a development went in to the West, taking over the cornfields where we used to play, and knocking down the barn I wrote a horror story about in college. Now there are houses to the North, too, and someone has kindly deposited a huge propane tank in the fence row.

The old Chestnut tree is still there, though. American Chestnuts died in a blight, you told me, when you were little. Apparently, the blight was discovered in 1904, and had wiped out most of the trees on the East Coast by 1940. I was recently told that, even dead and on the ground (this one is still standing) they’re of value, because it takes the wood so long to deteriorate. I’ll have to look into that.

It’s in the 70s here today—mid-Winter!—and I’m sitting on the back porch writing this. I’m watching a groundhog nose around in front of the old Chevette Renee got from her parents when we got married. I assume he’s living under it. He’s going to be upset when I have it towed away this Spring! (Note—it is late Summer as this is published, and the damned Chevette is still there!) Six cars left to get rid of, of your collection that was once 13, counting cars left here by Susan and her son Dawson.

Because it’s so nice today, at Renee’s suggestion, I decided not to work inside. 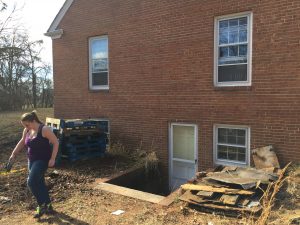 The basement stairwell–AFTER Jess and I had done some heavy cleanup.

The basement stairwell is the only (permanent? safe?) way to get into our large basement rooms—3000 square feet of unfinished space. When the boys from Potomac eCyclers and I began clearing it of all the junk you had accumulated in the last 40 years, they piled a lot of scrap metal and trash all around it. This was added to the accretion island of too-heavy pieces, roofing and a wooden ladder that you had assembled about 25 feet East of the house. It was a mess, where Mother used to have azaleas and we used to build Matchbox cities in the bare spots in the lawn.

It’s also a mess that Ethan and Jess have to look at any time they gaze out their bedroom window. The same is true of the Library, which I’m currently trying to civilize again. So time spent making sense of this junk heap is time well-spent.

I had to divide the stuff into multiple categories: Recycling, Hazardous Materials (mostly latex paint, which still astounds me), Construction Waste, Scrap Metal and Trash.

The scrap metal consists of equipment carts and cabinets that the boys didn’t want, personal computer cases, back and side panels from various pieces of equipment, and… the THING. I don’t know what it is. It’s fluid-filled, with some kind of green oil. It’s heavy as hell. I tried putting it on a dolly, and the dolly’s wheels sank all the way into the ground. I imagine that, if I drain the fluid out of it, it will be easier to move. But what the hell is the fluid? Is it safe to handle? Can I pour it into a pan? 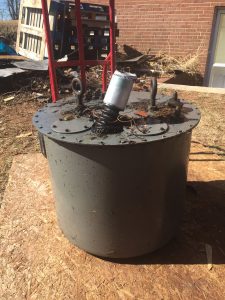 I’m trying to get Philips Electronics to tell me. They made the thing. Of course, the only contacts they have are for consumer products. The girl who answered the phone when I called their main number asked, “It does have a lithium ion battery, right?” I just laughed and gave her the model number. She’s researching to find out who can research it. The world today is not prepared to deal with the world we lived in 40 years ago, is it?

Anyway, I’ve cleared one side of the stairwell now and am going back to at least straighten the other side—mostly just moving all the scrap plywood, Masonite and pallets the boys left so they look less junky. Then I have to tear down the island, find out what The Thing is (Kathy from Philips is still checking—she asked for pictures), and then, another day(s), haul away the various piles. Hoping to get money for the scrap.

Oh, and the dishwasher did successfully clean its first load of dishes… on the second try. At the end of the first try, I opened it to find it hot (the drying element still orange!), the dishes still dirty, and the Cascade powder everywhere.

Sigh… Helps to turn on the water supply, doesn’t it?