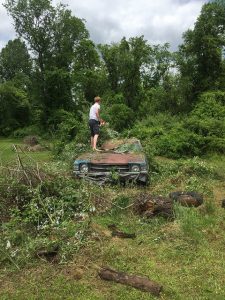 Christian works to reveal o9ne of many wrecks buried under fallen trees and overgrowth–the 1971 Malibu.

It’s going to take years to reclaim the property around this house! Unless I come into a huge, lump sum of money all of a sudden. The back property has as many fallen and broken trees as it has healthy ones. The property around the house is littered with clumps of briars and honeysuckle, with tree stumps or metal debris at their core, making them tricky to take down. You started it years ago, by placing outside the few pieces of equipment too big, too heavy, or in too-bad shape to go inside.

For years, you at least kept the briars and vines trimmed away from these. You gave up sometime after your 70th birthday. Then you “hired” some person who said he would take down trees and haul away brush. He cut dozens of trees off at 30 inches, left their stumps, and dumped the trimmings all over the yard—fostering the growth of more brambles. And you had an absolute allergy to ever cutting down any tree, even if it was growing up amidst the branches of another one. We have a lot of work to do.

This week I had the door put back up between the kitchen and the family room. Yes, the same door, doorjambs and hinges you had used all those years ago. I used a new doorknob from the shelf of door hardware in the metal building. You bought a lot of door hardware! The old doorknob, one with a keyed lock, is here in a box. Probably its original box, if I know you. But it’s in such bad shape that I didn’t want to try and use it. Plus, “it’s here,” only means that I’ve seen it in the last three years. It would probably take me hours to find it. I’m still going through the contents of the living room and the metal building to find tools and building supplies.

The door was originally installed before we moved into the house in October, 1967. It closed off the three rooms we lived in—family room, laundry room, the guest bedroom—from the other thirteen. You, Mother and Charles slept in the family room, Charles on a daybed in the corner, you and Mother on the foldout couch. Susan and I slept in the bedroom, she on her own bed and I in my crib. I believe we lived that way for about three years, with the temporary door establishing our little apartment as a separate dwelling. We used the fireplace for heat, as well as some ancient space heaters with exposed elements that glowed orange. After a bath or shower, I would huddle in front of one of those heaters in the family room, and you would yell, “Get out of the heater!” I believe that’s where I learned the fine art of sarcasm. 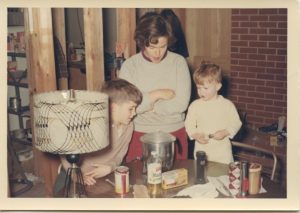 The only picture I could find of the door, behind us as we made popcorn–a rare occasion. That’s me on the right. You can see the unfinished walls of the hallway and laundry room, as well as some vintage Coke cans.

The door stayed up for a while. It was there when I was in second or third grade. I remember my siblings standing on the other side of it, trying to scare me by making guttural sounds, while I shouted at him to stop. I had just watched the Star Trek episode “The Lights of Zetar,” a story essentially about ghosts and demonic possession, albeit in a science fiction setting. I was terrified by it. I didn’t eat that night, and I couldn’t sleep. Charles and Susan would make the garbled sounds of the possessed victims to torment me for days after that. So I know the door was there for that horrible period of my life.

I assume it came down when you put in the hardwood floor in the family room, guest room and connecting hallway. You also painted and paneled all three rooms of our former “apartment,” after all of us had moved to other rooms. I think that must have been between 1974 and 1976. I know all the work was done by the time Susan got married in 1977. But, you know, you never finished those rooms completely. You didn’t install window sills or window facing in the family room. You didn’t put the last piece of trim under the installed sills in the guest room or laundry room. In every job you did in this house, you left something unfinished—at least one, small thing.

Mother asked to have the door put back around the time you died. She wanted to be able to close off the rest of the house when she was home alone, or when guests were over and she didn’t want to be disturbed. She admits that this house makes her nervous, now that you’re gone. “It’s so big!” she says. She’s right, it is. There are three doors from the outside, and many large windows. Someone could enter the house—forcibly or otherwise—and someone in the family room, where Mother spends her days, would never know. That’s especially true if you’re hard of hearing, which she is.

On one of her tours of assisted living facilities recently, one of the guides told her that, as we age, we don’t like big, open spaces. She thinks that’s happening to her. She and I talked about it, and I think it makes sense. Your body is slowing down, you don’t have the mobility you used to. Maybe you’re on a walker or a cane, maybe your legs are just aching and stiff. Your brain might naturally say, “I need to stay in small spaces that my body can manage, for my own safety.” If you don’t follow its wishes, it probably attacks you with anxiety to get its way.

I’m making it sound like your own brain can turn against you, and I don’t have a medical or scientific degree to lend credence to my opinions. I just think it makes sense that that could be what’s happening to Mother. I think it happened to you, too. I think that’s why you hung curtains in every opening and placed furniture so that it blocked many hallways, and, ultimately, even exterior doors.

Anyway, the door is up. My friend Michael, who did the drywall in the crib room, came and hung it last weekend, after I found the jambs in the basement and the old door in the music room. This week he’ll drywall around it, and Mother will have her own apartment.

The more things change, the more they stay the same. At least she doesn’t have to burn wood or shout, “Get out of the heater!” to anyone.