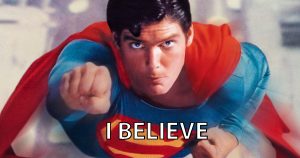 Sunday I saw Superman: The Movie in the theater for the second time. The first time was the year it came out—1978. It was December. I was 13. I was there with my best friend, and we had both been reading about the production of the film for a couple of years in special update pages in the back of every issue of DC Comics. Some lucky kids about our age had won cameo appearances in the film, the result of a much-ballyhooed contest. At that point in my life, I had only seen about a dozen films in the theater. This one was a big deal.

I loved the complexity of Superman’s mythos—the exotic world of his birth, the bottle city of Kandor, a miniaturized piece of his home, the various colors of kryptonite and the various effects they had on him, the kick-ass supporting cast that surrounded him—Ma and Pa Kent, Lana Lang, Pete Ross, Lois Lane, Jimmy Olsen, Perry White, his cousin Supergirl, his pet Krypto, the Super-Dog. This film was only a small, two-hour slice of comic book life brought to the screen, but it was the biggest, boldest attempt ever to do so. And, unlike other live action super hero fare that had come before it, it did not insult the character by camping him up, and it did not make him more mundane in order to fit into “the real world.” (I’m looking at you, TV’s Incredible Hulk!)

At 13, Superman: The Movie stoked my imagination, which was already in thrall to comic books.

At 53, Superman: The Movie, made me, with tears in my eyes, come to terms with a very simple truth:

The tag line of the film, on its release, was “You’ill believe a man can fly.” This movie set out to convince you that it was possible for a person to achieve greatness beyond the known limits of human ability.

It did just that. That memory came home to me Sunday.

I believe that a person can be phenomenally powerful, and yet want to do good above all.

I believe that there can be people who never lie.

I believe that there can be love between people from different worlds, and that the love of a tough, practical person like Lois Lane can ground a dreamer like Kal-El of Krypton in the “real world,” yet fuel him to keep flying.

I believe that our ideals are greater than we are. Superman’s father Jor-El follows the rules, listens to his government, and, in his own words, allows genocide to happen on Krypton. He is afraid of being a troublemaker, but he bends the rules just enough to send his infant son to safety on Earth, knowing that Kal-El will help to make that world a better world than Krypton was.

I believe that you break the rules when you have to. Superman changes history to prevent the death of the woman he loves. Sometimes you have to put people ahead of principles. I believe that there are some who know when that time comes. They are our heroes.

I believe a wise parent can help his child surpass that parent. Jor-El quietly let a world die screaming, but Superman saved Earth, over and over again–because Jor-El believed in him.

I believe there are obvious evils that a person can address and prevent, without getting bogged down in politics, without calling other people names, and without starting wars that hurt more people than they help.

I believe we’re not done, as a race, as long as at least one of us can stand out, can recognize the good, can work and fight to make that good happen.

I believe there can be Supermen. Superpeople.

There was a boy sitting in the seat in front of me in the theater, who looked to be about the age I was in 1978. I couldn’t help hoping that especially heenjoyed this film, and that, in 40 years, he’ll find that he can still believe.

1 thought on “I Believe”