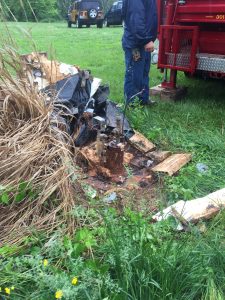 I’m talking about the actual well, the one you had dug in 1967. Recently, the faucets began spitting air. The toilets were making awful noises when they filled. I thought it happened once because I’d washed the bed of the truck for about an hour, flushing it out with the hose. (I said “recently,” and I now realize that that was before I turned the outside water off for the Winter—so probably October, 2017 at the latest.) I thought I had just run the well down. But then I remembered that the single toilet you had installed back in 1967 had begun making sounds like a helicopter taking off back while you were still with us. You denied it was happening.

Mother thought the sediment filters were just needed to be changed, but I told her that, if the filter was letting air into the lines, it had a lot more wrong with it than just needing new cartridges.

I called Kastner Plumbing, and Mike said maybe it was a stuck check valve in the well. Or he agreed that it could be just that I’d drawn the well down. Since it was dug in 1967, the County would not have a record of its depth, and Mother did not remember. It could also be a leaking bladder in the tank, or holes in the actual water supply line to the house. He said to check the tank’s cycle. It was fine, kicking the pump on at around 38 PSI and off at around 50. So we kept a log of problems, and all was quiet for a while. Then the spitting started up again badly, and the pressure was terrible upstairs.

So I called Gary to come out and look at it. He and I pried up the old well box… and learned that it wasn’t the old well box. As long as I could remember, there was a plywood box, about 30 inches on all sides, covering the well cap. It was coated in tar paper (which you called “felt.” Does anyone else call tar paper “felt,” I wonder?) and, at some point down the line, you had wrapped it in black plastic. But when Gary and I hauled it out of there, we discovered that the box was formed only of Styrofoam sheeting. Underneath it were two pieces of fiberglass insulation, so old they had adhered to the well cap and its attached pipes.

Once we cleared all that, Gary said, “Oh my god, what am I looking at?” Not a good sign. The well shaft is 5 5/8″ in diameter, and lined with a steel pipe, capped with a fitted, iron lid. Coming out of that cap was a faucet. I had no idea the well had a faucet on top! I don’t believe I had ever actually seen under that old well cover. The junction box for the electrical line coming from the house was next to the cap, with the Romex cable running down into the shaft. And the top of the galvanized pipeline that fed water to the house was there, above ground.

“It’s amazing that doesn’t freeze all the time,” said Gary.

I told him it had never frozen, but that I assumed the possibility was why there was so much insulation around it. Mother later told me she remembered working with you a few years ago, in the dead of both night and Winter, to get the cap reinsulated. I guess that’s when the plywood box went away.

Gary pointed to the galvanized pipe going into the shaft, and said he assumed it was rigid all the way down, probably at least 100 feet. That, he said, would have to be hoisted out straight up, and probably cut off as it came out, until they reached the pump. He didn’t think they’d have the equipment to do that, but he wanted to check with his dad. “I’ve never worked on a well like this one,” he said. “This is before my time.” His dad called me later and said we’d need a well service company, with all the trenching and drilling equipment, to handle the job.

A couple weeks later, I had the well service company out. They didn’t seem phased at all. On the phone, they told me they’d replace the check valve the same day, if that was the issue, and the pump if necessary. “It’s rigid pipe,” I pointed out. They said that was not a problem. The two guys who arrived to do the job turned off the power and water, checked the faucet for vacuum, which it had, and confirmed that, yes, there was a hole somewhere between the faucet and the pump. They worked fast, and said they’d be done in three or four hours. I was impressed. I went back inside to tile the bathroom.

About ten minutes later, however, they were at the door. “That pump is hung on something. We can’t lift it more than a foot.” I came out and they showed me. Sure enough, the pipe would only move about a foot. Most likely the shaft had caved in at some point, and rocks had wedged the pump in place. “Is there a hole in the liner?” I asked. He explained that the liner only goes down about ten feet. The rest is dirt and rock.

Normally, they said, with a well line that was only about 150 feet, which is what we were expecting, they could pull the pump out by hand. This would require a crane lift, which would cost $500 just to bring out, and… the crane was back at the shop, 45 minutes away, and the nearest driver was 40 minutes from the shop.

So we were going to pay them over an hour just to wait on the crane, and then $500 for the crane.

“So the crane will force the pump free?” I asked.

“One way or the other,” he said. It would break the rocks loose, or it would break the pipeline, and the pump would drop down into the well. “That’s no problem, we’ll just put another pump on top of it.”

No problem, I thought, except that we still didn’t know if the sinking water table had reduced the well’s output. “Bring the crane,” I said.

There’s more for next time.