Well… not really. I spent most of Memorial Day weekend at Balticon. Balticon is Maryland’s oldest science fiction convention. It is always as old as I am. The first one was held in 1967, months before my second birthday. So the number of the con is always my age when it’s held. This was, then, Balticon 52. I missed Balticon 51 because you had just died. I missed Balticon 50 because, well, it wasn’t well-planned. They only offered me an hour in which to speak. I’m used to having six to twelve hours of programming to participate in, and I wasn’t going to drive to downtown Baltimore and park for one hour of programming time.

While I was at Balticon, actually quite enjoying a Sunday with my family, because my schedule was light and we had time to explore Baltimore, a storm hit. Storms always hit Maryland in the Spring. Not a big deal, right? But have I mentioned that it’s done almost nothing but rain for the past ten days? Well, after all that, eight inches of rain came Sunday afternoon. The Tiber, the tiny little Hudson (not that Hudson) and the Patapsco flooded their banks… 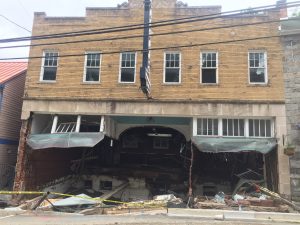 Historic Caplan’s Department Store, wrecked in 2018 as it was in 2016 by unthinkable flooding.

Yes, we lost Ellicott City Main Street. Again. Water rose up under the buildings, many of which are literally built on the Tiber River, and shot out the windows. The buildings at the bottom of the street are badly damaged. The buildings at the top took on water. Our friends at All Time Toys (who sponsor your grandson’s blog), The Archive (who feed your other grandson’s game-collecting habit, and my own record-collecting habit) and the Judges Bench (where Renee and I eat every Tuesday night) have lost inventory to water, and profitable business days to the closure of the street.

We’re going to help all we can, but, I have to say, this was a blow for me. With all the dragons I’ve slain during the last couple of years while you were ill and dying, seeing these people knocked down after they had just stood back up, and in one of my favorite places in the world, was just too much. I guess I know some of how you felt in 1977 when a flood devastated Yancey County. 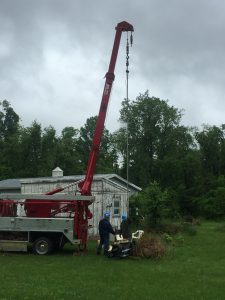 But I was telling you about the well. The team that came to look at our pump, with the possibly leaky check valve, had sent for a crane, because the pump wouldn’t come out of the shaft. We waited almost two hours for that crane, and it was pouring outside. But the crane showed up, and they hitched it with something like a giant alligator clip to the shaft. Almost with no effort, the hydraulic power of the crane pulled the pipe about ten feet out of the well. It didn’t seem like anything had broken, either. We shone a light down the shaft, and one of the crew said, “What the hell is that? Looks like a tee!” 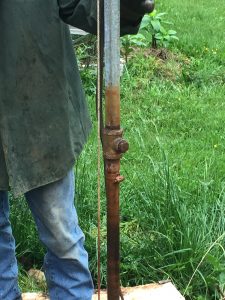 Sure enough, down in the shaft, there was what looked like a galvanized plumber’s tee. The guys who clearly knew wells were shocked.

As the line came up out of the ground, the tee made it to the top. It was a union joining the galvanized pipe—about twenty feet of it—to a flexible line.

“Stay away from that stuff,” said the lead guy. “That’s old, flexible ABS.”

Is ABS bad for you? As far as I know, they still use it to make action figures.

“Why the hell did someone join steel to plastic that way?” they asked me.

I told them that the only person who knew was unlikely to answer.

Mother told me that you and Pa installed that pump, so you were the ones who installed that union. Whether they had ever seen its like before or not, it lasted over 50 years. I think you done good. 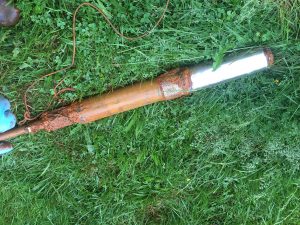 Once the old pump was out, we found the problem. Its bottom half was clean and polished, while its top was caked in mud. It had been mired in mud. That’s why it wouldn’t move. And, while the galvanized and flexible line were intact, the pump housing itself had a hole in it. Hence the air in the lines.

It took only about another hour to run the new pump down into the shaft, and then it started pumping water at over seven gallons per minute. I was told that was an excellent flow. The water looked like a chocolate beverage from Starbucks, of course, but it was coming fast. The guys told me not to pay them to sit and watch the silt run out of the well. They reconnected the house supply. I bypassed the filters and drained the water tank into the laundry tub in the basement with a hose. 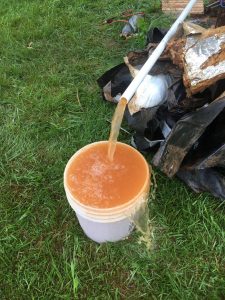 Did you know that the laundry tub can’t drain at seven gallons per minute? I plunged it out with a toilet plunger, and it got a little better, but I guess years of using it for rough cleaning, and then having it sit, unused, for decades, have taken its toll. I texted Ethan and asked him to get me another section of hose at the store, ASAP, so I could drain the silty water outside the house.

After that, and after changing the sodden filters (we should have bypassed them before clearing the silt) we have good, strong water pressure.

But, with all the insulation around it, that well cap hasn’t frozen if 50 years.

All things in good time.