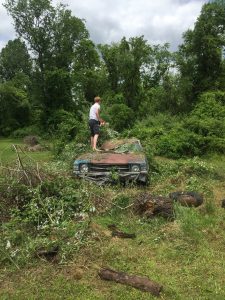 Christian unearths the wreck of the Chevy Malibu

The green bathroom is well underway. I have only the section of wall with the actual shower plumbing on it left to tile. I hope to accomplish most of that today. After that, I still have a list of things to do that are drywall and electrical. And I need to floor the dressing room and get the cabinets put in for the sinks.

Susan’s bathroom shouldn’t take long. I have to get the floor down, and, honestly, can probably have the plumbing finished before I tile the entire shower. I’ll finish that wall and then ask.

Fortunately, the inspector who came to look at the air conditioning turned in a positive progress report on the plumbing, despite his concerns when he was here. I suppose being assured that we were making progress by both the plumber and me was enough.

This weekend, I have friends coming to help clean up the outside. It’s in rough shape.  Charles was keeping it mowed, and now Ethan and Christian are. But, over the years, so much debris has been piled up—especially around trees—that briars and long grass are everywhere. And trees are growing inside of trees. The three pine trees you planted around the house—at least one of which was once a live Christmas tree, and may have come from North Carolina—have trees growing inside their branches. The garden fence is lined with trees that should not be there. Three cars were completely obscured by brush. Christian got cleared one last week.

I suppose it all became too much for you to care for.

So I’m asking everyone to bring clippers, trimmers, chainsaws, etc, and pick a feature to clean up. And we’ll feed them and have a cookout. I hope it results in us getting a lot done.

Speaking of cars, Mother has decided to part with the Durango. It still runs, but three of its windows have fallen down into the doors. The power window motors are apparently all shot, so there’s no keeping the windows closed. It’s costing her about $500 annually in insurance, and it’s only worth about $1300 as a trade-in. Not to mention, with the windows in the shape they’re in, it’s probably worth nothing at all.

So it’s going to Goodwill with the rest.

We’ve sent a lot of cars there. We had a lot of cars. When I was born, you owned two station wagons—a 1965 Ford Fairlane and a 1960 Pontiac Catalina. In 1971, you bought Mother a Chevelle Malibu, and you took to driving the Ford. By 1973, Susan was driving and Charles was going to start, so you bought a Capri with a stick shift. It lasted maybe three years. I remember a couple of men at the grocery store telling you it was a sexy car. You replied that you were attracted to its 30 MPG rating. But no one was attracted to anything else about it. Mother was reminded that she hated driving a stick. She had put her foot down while pregnant with me, and that’s why you traded in an old Rambler, I believe, and bought the Fairlane. I think we kept the Capri three years. It was one of two vehicles that you parted with in working condition in my lifetime.

You gave the Pontiac to one of my bus drivers, Henry Lee, who also worked with you as a custodian at Johns Hopkins APL. You replaced the Capri with a 1977 Impala, which I wrecked in 1982. You kept that, put a new front end on it, and paid cash for a 1982 Impala to replace it. The 77 never drove another mile.

In 1974, you decided you needed a truck. You brought a Ford, which you modified with a second gas tank, allowing you to make the 500-mile drive to Pensacola, NC without stopping. You hated stopping for any reason on a trip. The rest of us lived for stopping. The second gas tank was not good news. I think it was around the time that you installed it that I lost the ability to pee into a soda can—your recommended method for avoiding restroom breaks. I think my mind told my bladder to go on strike.

In 1981 you bought another Ford, a Ranger F250. It’s still here, and Jamison wants it. You did not get rid of the 74. You bought lots of parts to fix it, and then used it for storage.

In 1988, when I was just out of college, my first car, a 1975 Malibu Classic I had bought from our neighbor, Eva Bryant, lost all of its engine compression, and I was forced to buy a new car. I had paid Eva $800 for the Malibu Classic, and put 60,000 miles on it. I guess I made out okay. So I went to Crystal Ford to find something I could pay $3,000 cash for (money you had invested for me for college, which I wound up not needing.) They had a fleet of retired rental cars, 1987 Tempos, just one year old and with very low mileage. They offered me one for $6600. You came to look at them with me, kicked in another $3600 in cash, and then laid out $8800 for a lower mileage 87 Tempo of your own. We drove them both into the ground, and they both ended parked for in the driveway through their 30th birthdays.

The Malibu Classic, appropriately, went to a teenager in the neighborhood who wanted to learn to rebuild engines. I did not ask him for money.

Around 2008 you bought an F150, which you drove into the river off Green Mountain Bridge one night. That was when I started to worry about your mental clarity. I should have worried harder. The truck survived, as did you, but then you drove it over a drainage grate at Laurel Mall, bent the axel and totaled it. “You used to be able to drive through that section of the parking lot!” You insisted. I agreed that that had been true—until about 1972. For 40+ years there had been a jersey wall there, making sure no one drove over the grate. In 2012, they apparently moved it for maintenance.

That truck totaled, you actually let it go. You bought the blue, 2012 F150 we still have. Mother says you also bought a green one and traded it in for the blue one the next day. I don’t remember that, and I probably wasn’t ever supposed to know it. By 2012, the dementia was in place, and Mother’s strategy for dealing with it was to try and keep you happy at any cost.

The only other car you let leave under its own steam was a Crown Victoria, which you replaced with a Lincoln Town Car in 1996. You also bought a surplus 1969 International Travelall, which has never run. With the Durango and the Ford Escape Mother drives now, I believe that’s 16 cars that have come onto the property. By the time you had quit driving, only four had left.

One more way I had my work cut out for me…

1 thought on “The Colonel’s Plan – The Junkyard”