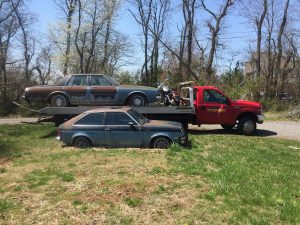 Last time I talked about the cars you let leave here under their own steam. As your dementia set in, you did let some others leave, on tow trucks presumably. One of them really annoyed me.

There was “a man” that you “hired” to work on landscaping the property around the house. “A man” is in quotes not because I doubt his gender, but because that’s all he’s ever been called in my presence. I don’t know his name. I know he lived “somewhere in Montgomery County” and that Mother thinks he died, based on the fact that he stopped coming here and you never heard anything else from him. “Hired” is in quotes because you did not actually pay him.

Mr. Man told you he was cutting down and trimming the many wild and unmaintained trees on the property. He also told you he was hauling them away for firewood and taking the brush to the landfill.

Well, he did some cutting. The brush is piled all over the property, and now overgrown with briars. You weren’t even aware of that until a year or so after “Man’s” last appearance. He cut off several trees at three-foot height, which was not particularly useful. I know that’s a trick contractors use, but they do it so that there’s enough stump left to remove. You did not intend to remove stumps. You told me, shortly before you died, that you were going to turn those stumps into tables. What you were going to do with 15 or 18 tables scattered around the yard I’m not sure. I do know you weren’t going to trim or mow around them, because all of them turned into blackberry islands, making the yard nearly impassable.

Mr. Man did not remove the dead dogwood tree, nor did he remove any of the fallen trees that blocked access to the trail through the back property—meaning it could no longer be mowed. He did partially saw up a tree that had fallen on the Chevy Malibu, but only partially. A huge section of its trunk was left to block access to it.

And yes, execution by tree was how the Malibu died. You had it parked in the back yard, covered under one of those custom car covers, because you considered it the most valuable “antique” on the property. But you parked it under an old wild cherry tree, and Hurricane Sandy or one of her sister storms dropped that tree right on it. We were all very sad. All three of us had learned to drive on that car, and I had driven it, rusted and temperamental, throughout high school. People remark that I drive with both feet to this day. That’s because I learned on a car that had to have a constant feed of fuel just to keep idle. It’s amazing to me now to realize that it was only 12 years old when I was going through that with it. As I write this its wreck is staring at me through the window of the library. 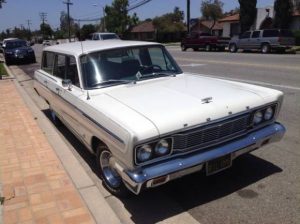 Anyway, as payment, you gave “that man” your 1974 Ford Pickup and the 1965 Ford Fairlane. I was furious. You had discussed your plan with no one. You just let him take them. And, once they were gone, you never heard from him again. Both of those vehicles are probably rotting somewhere. He didn’t even take the titles. I still have them. In a couple of years, his family will no doubt be able to claim the titles as belonging to junked cars that have been on their land for seven years. I’m letting it go at that, but I’m still annoyed with you. I came home from the hospital as a newborn in that Fairlane, and I had honestly intended it to stay with me. Oh well, I have its title, its owner’s manual, and, oddly enough, its dash panel. We found that while cleaning up the basement. I know it’s the original, because the marks are there from the piece of electrical tape you placed over the odometer window when the odometer went bad. I found the odometer, too. As long as I could remember, it had been in the drawer of the workbench he had built before I was born. You must have moved it, for the eCyclers found it in a junk box in another room. 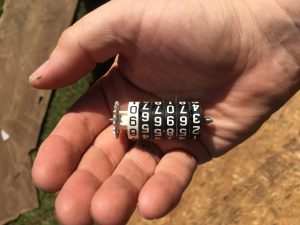 I gave the 1996 Mercury to one of the eCycler crew, Izzy. He was a mechanic, and he actually got it running and drove it out of here. After it had been gone a few days, you decided you wanted it back. I told you you had signed the title and things didn’t work that way. Besides, I asked you, what would you have done with a fourth working car when you could no longer drive? And that started an argument about how I “took away your driver’s license.” I didn’t, but I could never convince you of that. I’ll save that story for another time.

Two Impalas – the one I wrecked and the one you put almost 200,000 miles on, went to Goodwill. So did two 1987 Tempos, mine and yours. Susan had parked a Saturn of some vintage here, and Dawson had deposited a Daewoo. Those both went as well.

Renee’s first car, a 1981 Chevette, is here. It threw a connecting rod on me around 1989, and you and I, with some help from my friend Dave Ross, put a new engine in it. That gave it another year or two of life. It goes to Goodwill next.

Mother and Charles have given up on the Durango. It still runs, and Charles wanted to fix it up; but it has power windows, and they’ve all failed. Worse, failed, they all fall open all the time. It’s worth $1384 Kelly Blue Book—in good condition. I assume that means with Windows that can at least stay closed. So it’s going. We’ve already turned in the tags.

Your brother Bob, without permission, brought a Thunderbird here in 2004 and deposited it out back—for two weeks. It’s still there, and he’s still deciding what to do with it. 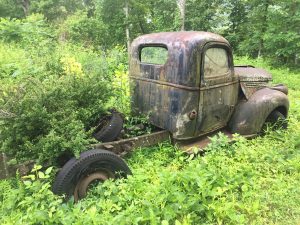 We’re down to five non-running cars, with two on their immediate way out the door. I guess that’s an accomplishment. We should have seen this coming. Your first truck a 1941 Chevy, I believe, was parked in your parents’ yard in the 1960s and has sat there ever since. Its last ride was in 1966, when my cousins “borrowed” it for a joy ride. You never knew about that. They put someone’s foot through the floor board, almost died when the brakes failed, and, if I’m not mistaken, set the engine on fire.

But you were going to fix that car.

No, that is not a job I’m going to finish for you. That car is now a landmark of Rocky Fork Road. People drive up just to have their picture taken with it. My cousin Darius, who now owns the house, was going to get rid of it. But he and his wife finally decided that, well, it just looked like it belonged there.