Sorry for the missed week, everybody. I was out of town for Christmas, and writing and vacations do not mix for me. Even though these blogs are written six months ahead, I didn’t even want to take the time out to edit and post while spending time off. And then we hosted our annual New Years’ party on the day our eldest cat, Oreo, died. So the past two weeks have not been conducive to posting. Thanks for sticking with me through 2018, Happy New Year, and I hope you continue to enjoy! — Steve 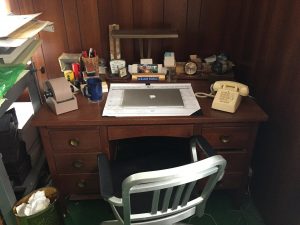 The Colonel’s desk, with his DayTimer files visible at bottom left.

As I have time to go through the papers in your library, one of the things I’m finding a lot of is lists. There are a lot of those tan “Things To Do” pads, a lot of Day-Timers in authentic Day-Timer™ file boxes, and various date books. Some of the file boxes contain microfiche instead of Day-Timers, and many of the date books have only a few pages filled out. The 1985 date book sitting in front of me is completed only for February 25th and 26th. I know for fact that there’s another book for that year, more complete. That’s the year Renee and I met, so I saved it for reading, to see what you were up to. I may not have been paying much attention at the time. 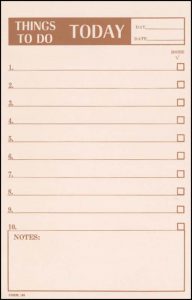 Apparently Raytheon was here the morning of the 25th, at 10:30. By that time you had started your company, set up a conference room in the basement, with a blackboard, meeting tables and a cubicle for the interns that came from the Air Force Academy to work with us. Someone named Estep also came by to get equipment from you. He’s not in your rolodex, so I don’t know the rest of his name or what he did. I have seen his name scrawled on various boxes, though, which either hold equipment he was supposed to take, or equipment he generously donated to your collection. You listed the model numbers in detail, and even the fact that one of the units had a bad switch contact.

This is when I must remind you that you were director of a research facility. Diagnosing hardware issues was way beneath your pay grade, but that was you. You got bogged down in the details. It offended you when equipment didn’t work, and you needed to fix it. I think you actually felt sorry for it. I often heard you describe inanimate objects as “nice” or “poor.” I once broke a coffee cup in anger, and you said, “That poor coffee cup wasn’t doing anything but its job!”

A Major called to supply you with an activity code, so you could fill out a form. You noted the name and number of the person who was to supply the form. Then you apparently spent a great deal of time “working out” the cost of an HP 71300, which appears to have been a spectrum analyzer. You determined it came to $56,965. And now, if it’s still here, it’s worth $0.10 per pound. You were very interested in the list prices of the equipment you bought for pennies on the dollar. I think it made you feel wealthy to have a basement full of equipment that the U.S. Government probably spent in excess of a million dollars on, even if it was now worthless. Tektronix also called to say they were shipping a unit, and another private collector called to ask about a piece you had.

I would say your days in 1985 sounded a lot like mine in 2018—meetings, chasing down idiotic details for paperwork that no one would read, and getting hardware moved in and out. I think I don’t let myself get as caught up in the details as you did, but I still sympathize with how soul-killing a lot of your activities must have felt. It’s little wonder to me that you didn’t really make it as an independent contractor. There just weren’t enough victories. You couldn’t see yourself making a difference. I think the only satisfaction you took from running RAL, Inc. was that you got to mentor two Air Force cadets. And I know from contacts over the years, including letters they wrote you, that it was mutually beneficial. Deep down, I think you never stopped being a teacher and a guy who liked to make broken things unbroken again.

I use lists too, but I use them differently. Your lists all say, “Today, I did this.” I don’t know if you had any mechanism for reminding you what was left to be done, or what the deadlines were to get things done. I think you left deadlines to other people. You hated them yourself. “Why does everything have to be done on a deadline?!” I remember you demanding to know when we were working on some project—I think it was something to do with my car. “Because I need the car to get to work tomorrow,” did not seem to satisfy you. You were always ready to say, “Just take my extra car!” rather than meet a deadline.

Lists run my days. It’s the only way I can function. Every Monday morning, I start the week’s list by jotting down the dozen or so things that need to get done this week. Every other week “Fill out timesheet,” which was supposed to be done the Friday before, leads the list. If I’m lucky, only three or four things get added on Monday, and I don’t get a phone call or have a meeting before I can copy the unfinished tasks from last week’s list—right now it’s about a two-page backlog—over to this week. When things are done, I cut them from the top of the list and place them under “done.” It helps me write weekly reports, and know where I was and what I was doing when I, say, lost my keys. And the older tasks are divided into categories—Home, Fire Department, Publishing, Blogging, Consulting.

I keep a completely separate list for the things I’m going to do and have done in your house. In fact, there are multiple lists. There’s a list for each room. I break them down into very small tasks. Part of the reason for that is so that, in the event someone asks, “What can I do?” I can give them a focused task. Part of the reason is so that I can feel less daunted by seeing, “Lay out tile,” followed by “Get cement,” and “Cement Tile,” than I would by, “Tile and grout an entire room.” And part of it is so that the “Done” section of the list gets a lot longer a lot quicker. There are those victories.

I wish, in your later years, you had had more of them.