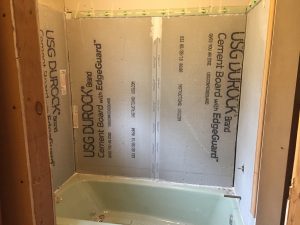 I took this week off to work on the green bathroom, among other things. It’s Wednesday at 2:52 in the afternoon, and I wish I could say I had gotten more accomplished. I suppose I’m too demanding of my time. So far this week, I’ve met the inspector for the new air conditioning system—more about that in a minute—I’ve bought window facing, because we were out of it again. I furred out the rest of the studs under the window, so the tile would have a 3/8″ overlap where it met the Sheetrock. I’ve cut the last piece of Durock to go behind under the bathroom window. That one was the most difficult, because it had to fit around the air duct. I’m still jealous of your ability to cut wall panels that fit exactly around fixtures, and with no odd gaps because something was slightly out of level. I’m picking up some tips, though. I used a cardboard mask this time to make the cutouts for the duct.

I cut three pieces of Sheetrock to go above the Durock, and got all that hung. The walls are all covered now. And it’s time to begin tiling. I don’t want any mistakes, so I counted out tiles and did some test-fitting before beginning. I drew level lines at the top and bottom. I discovered that the tub was just slightly out of level—the bubble was still between the lines, but that left the bottom of the tile on the far left flush with the tub, while the bottom of the one on the far right was almost a half inch above the tub surface. That’s if I used a strictly level line. If I adjusted the tile’s level line to exactly match the slight pitch of the tub, all was well. I’ll have to cheat about 3/16 of an inch with those tiles on the right.

So I started tiling. I put in the top border tiles first, which may seem counter-intuitive, but I wanted them in place to direct the laying of the courses of Arabesque tile in the middle. And then I’ll put a row of square tiles at the bottom.

I also put in the window facing and a temporary door jamb. I wasn’t sure what in the world to do with the small projection of the wall at the head of the tub—it’s only an inch and quarter, if that. Then I realized that, with a door jamb on one side and at the top, which you certainly would have installed to finish the door opening, I could finish the edge with door facing and butt the tile against it.

I scheduled the company to come and inspect the well. They’ll be here Friday.

So I guess I’ve gotten a few things accomplished. I also had to go to work for half a day yesterday.

Now, about the air conditioner inspection… The installer called me after our new air conditioning was in—Mother decided to bite the bullet and go ahead and add central air. It should save money over running window units. It’s also a heat pump, so it will reduce oil usage in the Spring and Fall. The installer said we had to have a County inspection. Okay. I was off this week, so I said send them any day. They picked Monday.

I was hoping that Darrell, who had done the plumbing inspection and was so easy to deal with, would come. Alas, he did not. The man who did come was not going to win any awards for congeniality. I met him on the back porch and offered my hand. He did not take it, nor did he give his name, although that was on his badge. At least, I don’t think he gave his name. He muttered a bit.

He said, “Here to inspect your A.C. Where is it?” He started immediately for the back door.

“Do you want to see the inside or the outside unit first?” I asked.

“Outside unit don’t do me no good. I need the inside one.” He started again for the back door.

While we walked, he said, “You have an open plumbing permit.”

“It’s been over a year,” he said. “I know, because I did the inspection for the rough-in.”

I told him I didn’t think he had, because Darrell had come out.

He said, “Me or Darrell. It was one of us. But I need you to get it done. I talk to your plumber and told them I’m about to send you something called a vollation letter.”

Now the word is “violation,” but this is Maryland.

“It was actually last July.”

“We’ll have it finished.”

“And the kitchen and one bathroom are finished.”

“Don’t have time. Let your plumber handle it.”

Then he looked at the furnace. “What the hell is that?”

“It’s an oil furnace with a heat pump and air conditioner.”

He signed a yellow sticker and slapped it on the plenum.

“You want to see the plumbing now?” I asked again.

“No. Call your plumber.”

I told him to have a nice day—seemed unlikely—and called the plumber.

Let’s hope this doesn’t result in a set-back.