So I celebrated my birth month back in Adventure #335. This issue falls in the birth month of my lovely wife, Renee. 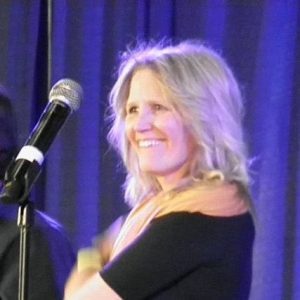 Of the two events—her birth and Otto Orion’s, I think I favor hers. She has, after all, been by my side for just about every step of this crazy journey into fandom I’ve made these last 34 years, and most of it wouldn’t have happened without her. But I might be biased. Anyway, on with “The Hunter!” 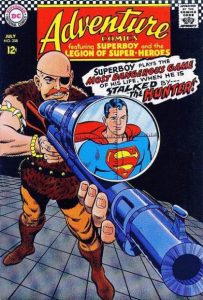 This month, Mort Weisinger’s assignment to his student writer (Jim Shooter) was to do a Legion story based upon Richard Connell’s 1924 story from Colliers, “The Most Dangerous Game.” Well, now, that’s not so bad, is it? I mean, who remembers a story from 43 years earlier, after all?

Damn near everyone, it seems. The story had been filmed no less than five times before Otto Orion showed up in the pages of Adventure. And it was familiar to TV viewers as the plot of episodes of Get Smart, Gilligan’s Island, Bonanza, and The Outer Limits. Later, it would also be adapted for Logan’s Run, Fantasy Island, The Incredible Hulk, Dexter’s Laboratory… The list goes on endlessly. Clive Cussler even “borrowed” the story for his Dirk Pitt adventure, Dragon.

Here’s the thing: For all it’s been adapted, it’s just not that great a story. Yes, the original had some interesting things to say about the human being in society vs. the wild, and the seeds of the murderer’s psyche that might be present in us all. Still, it’s a story worth seeing or reading maybe once. I’ve never understood why it keeps getting ripped off again and again.

Otto Orion is a big game hunter and a billionaire. And poor Otto is bored. He’s killed so many animals now that he has no room for trophies. He wants a challenge. He wants to hunt humans. More, he tells his trusted flunky, he wants to hunt the Legion of Super-Heroes. So off to Earth they go, Otto, his flunky and his entire cargo fleet full of dangerous beasts. They challenge the Legion to surrender or see Earth destroyed, then they let loose the beasts. The Legion can’t control them all, so they surrender.

What’s going to happen to them? They’re going to the jungle planetoid of Simballi, where Otto will turn them loose, hunt them down and kill them. Their only chance of reprieve is to travel 20 miles, climb a mountain, and touch a totem pole.

The Legion team is picked off—not killed, thankfully—one by one. Superboy is first, being the most powerful, taken out by a bird of prey carrying a Kryptonite net. Ultra Boy is next, then Chameleon Boy and Shrinking Violet. Violet has an interesting experience in this issue, driven off twice, as she is, by the same trick. When she shrinks on page 7, she is menaced by Orion’s insects. An almost identical scene is presented on page 17. Finally, Karate Kid is brought down. Each of the team gets about a page and a half, and then is carried away in captivity.

The final four pages go to Invisible Kid, the Legion’s leader. This is the story’s saving grace: it spotlights a guy who was brutally underused until Jim Shooter took over. Like a true leading man in the Sixties, Lyle gets shirtless, swings, Tarzan-style, through the trees, and finally reaches the totem pole under fire from Orion’s blaster. In a shocking twist, Lyle’s touching the totem pole triggers a bomb strapped to Orion’s chest. The Hunter wanted a true, life-or-death struggle. He knew the Legionnaires would not intentionally kill, so he rigged the game such that a victory by one of them would end his own life.