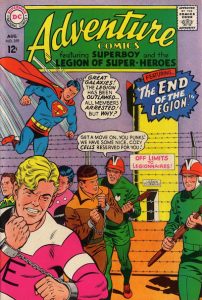 This is part one of one of the most memorable two-parters of a memorable run. The entire Legion is featured—even the oft-forgotten Supergirl!—we get more glimpses of the Legionnaires private lives, some Legionnaires go on the run and others wind up in prison on the hellish world of Takron-Galtos.

While all the Legionnaires are off Earth (with one team performing the impressive feat of slowing down the supernova death of a sun by pumping chemical compounds into its core), the President of Earth is killed in a freak accident, and his V.P., Kandro Boltax, steps up. His first act is to force through a worldwide water purification plant. (I don’t want to sound like a McCarthy-ite, but any time a new leader wants access to the water supply, ya gotta ask if he’s on the up-and-up.)

With everyone on Earth finally drinking pure water (we’re to assume that, until now, they’ve had to drink liquor or Perrier or something), Boltax’s next trick is to outlaw the Legion. Speaking for days (Holy Filibuster, Batman!), he convinces the U.P. Inner Council that the Legionnaires are reckless vigilantes who need to be reigned in. And suddenly the Legion is illegal. Landing on Earth, they find their cruisers confiscated and disassembled, their clubhouse off limits to them, and a standing order in place that they’re not to use their super-powers.

Invisible Kid insists they can’t disobey the law, however, when an elevated train careens off its track, Colossal Boy, Element Lad, Ultra Boy, Light Lass, Matter-Eater Lad, Mon-El, Superboy, Dream Girl and Saturn Girl see no choice but to break the law and save the passengers. They’re arrested on the spot and sentenced to ten years’ hard labor on Takron-Galtos. The remaining Legionnaires are ordered to cease wearing their uniforms and drop out of public life.

Walking sadly from the trial, the free Legionnaires are attacked by street thugs. They successfully resist using their powers and still make short work of their opponents. But they realize that these toughs knew of the court’s order to abandon their costumes, only minutes after it was issued. As Brainiac 5 observes, “The whole thing’s fishier than a seafood restaurant.” (I’ve decided since the Computo affair that Brainy must be a student of ancient Earth colloquialisms. Perhaps he thinks learning them and using them at odd times will make him more approachable to his teammates. But why so many of the Legion use baseball analogies throughout this story is still beyond me.)

The sequence is exciting, and results in Projectra being injured such that she can’t use her political pull to intervene to help the Legion against Boltax. It’s a little sexist, though, to our modern eyes, with Violet and Phantom Girl fighting a holding action only, until the boys can rescue them. (Although Supergirl’s there too, resisting using her powers to mop the floor with the mob, and Duo Damsel and Projectra make good showings.) Also, a stray comment by Karate Kid catches my attention—he says he’s been in touch with his “folks.” Later stories established that he had an adoptive father. I wonder who else comprised his “folks.”

We’ve seen Duo Damsel’s parents before. Apparently most of the Legionnaire’s parents moved with them to Earth. Notably, as I recall, Ultra Boy’s did not, nor the Lightning Twins’. This time out, Luornu’s father and mother—especially her father—are firmly on the side of the adult authority in the person of Kandro Boltax. They relate to her the tale of how it all happened, and then, before she can ask any questions to speak of, Dad Durgo puts up his hand and informs her that the news is on. Those of us raised by the Greatest Generation will recall our parents’ religious, nigh-obsessive devotion to the television news, and Shooter and Swan enshrine that piece of Americana here. Let’s hope it’s a piece that’s dropped off for good, because there’s nothing less endearing about my parents’ generation than their preference for Walter Cronkite over conversation with their actual flesh and blood.

Invisible Kid works out in his underwear. Coupled with last issue’s shirtless charge for the totem pole, this sequence suggests someone on staff thought maybe the Legion needed a male sex symbol. He finds that his mother has burned his uniform, and that his father has bugged his phone line. A couple issues back, I suggested that maybe Mrs. Norg was a single parent, since Lyle’s Dad didn’t show up for Parents’ Day. I guess Norg, Sr. was just out of town. But now I wonder even more how this poor couple reacted to their son’s later death, and why didn’t poor Lyle get a funeral?

Okay, back to the current issue! The free Legionnaires head to R.J. Brande’s world headquarters to ask their benefactor for help. This is Brande’s first full appearance in the series. His introduction in #350 was merely a one-panel cameo on a monitor screen. Sadly, he’s just as intransigent as the Legionnaires’ parents. He’s worse, in fact, as he calls his guards and tells them that the Legionnaires are robbing him. With no choice but to fight there way out of the building, eight Legionnaires must leave Lightning Lad, Duo Damsel, Cosmic Boy and Sun Boy behind.

Like rats, or perhaps characters in a Victor Hugo novel, the last eight Legionnaires (missing Supergirl, who has returned to the 20th Century after a four-panel appearance) take to the sewers. There they vow to form a resistance, free their friends, and find out what’s happened to everyone on Earth.