They decide to stage a prison break to free Cosmic Boy, Lightning Lad, Sun Boy and Duo Damsel. As they plot, we learn that the tyrannical president, Kandro Boltax, has a son hidden away in a secret room in the Presidential Palace—a son who looks oddly… familiar. Boltax Junior, unbeknownst to his father, is working to escape his confinement and warn the Legion about “the Influence.”

A successful prison break, drawn with style and visual impact by Curt Swan, on pages less crowded with panels than was usual at DC at the time, frees additional Legionnaires. It also introduces the Legion Espionage Squad, led by Chameleon Boy. We’ve never heard of this special squad before, but they make up for it in this issue. No sooner has Cham led a successful breakout than he takes over again to infiltrate Boltax’s office and learn how the people of Earth have been duped into letting the Legion be outlawed.

This mission doesn’t go quite so well. Duo Damsel gets caught raiding Boltax’s file cabinets, and everyone bugs out. As the Legionnaires kick themselves for blowing the mission, Invisible Kid suggests applying a little logic to the problem. They quickly realize that, to control this many people, Boltax would have to do something that would somehow touch the lives of every person, something like air, food, or… water. Boltax built a water purification system. Brainy analyzes the drinking water, finds hypno-chemicals, and immediately formulates an antidote.

A little sudden? Perhaps. But I personally like the illustration of the point that, if you take a breath and think your way through a situation, instead of plunging forward and acting on impulse, your problems can often be solved with ease.

Not that it’s completely easy to deliver the anti-hypnotic to the world’s water supply. Boltax shows up on an unexpected tour, forcing the Legionnaires to strike out at his guards, and a fierce battle ensues. There’s one touch in here I especially like: Phantom Girl, in immaterial form, still lands a solid punch on the jaw of one of Boltax’s guards. It’s a nice counter-point to last issue, where she waited to be rescued from a mob by the boys.

Brainiac 5 is knocked unconscious by a stray guard before he can administer his antidote, but a shadowy figure finishes his task. Drenched with water from an exploding storage tank, Boltax’s guards turn on him. Brainy’s shadowy figure is revealed to be… Rond Vidar!

Wait, who? Oh, yeah, Universo’s son. We forgot to give him a name last time. So, yeah, he’s Rond Vidar. Boltax, of course, is Universo himself, the master hypnotist.

Unmasked, he announces in true Scooby Doo villain fashion that he would have gotten away with it, too, if not for his meddling kid. (Scooby Doo would not premiere on CBS television for another two years, by the way.)

In the midst of all this excitement, the Legion Chain Gang has broken free. It’s not clear why they waited so long, but they return to Earth just in time to see that they weren’t actually needed to defeat Universo. On a happier note, they arrive in time to vote Ron Vidar in as the Legion’s fourth honorary member.

This is an example of what I’d call an “epic.” I justify that designation based on the fact that a good deal of time passes in this story—enough time for Legionnaires to be tried, sentenced, transported to a prison planet, and then to bid their time before escaping an returning. Enough time passes for a man to become President, force through damaging legislation, and then let its effects be felt by the populace. Enough time passes, and enough happens, that our heroes’ world is turned on its ear, and, when all is said and done, things return to normal, but you feel like you and your fictional friends have been through hell. Other stories in comicdom that compare are the Avengers’ battle with the Squadron Supreme back in Avengers #s 141-149, the Fantastic Four’s siege under the leadership of the Brute in FF #s 177-183, (I wrote about both of these arcs here) and the Legion’s upcoming battle with Mordru. And Shooter could tell this kind of story in two issues!

The story moves perhaps a bit too fast in places, but you don’t really notice that while you’re reading it. It’s just that exciting and that much fun. And, best if all, it’s certified Bastard People-Free.

Fans of my vintage will recall that this two-part story was reprinted in its entirety in the Giant-Sized Superboy and Legion of Super-Heroes #238. And there, it was given a gorgeous, wraparound cover that also makes it seem that the story is about the heroes who were incarcerated. (It also includes Sun Boy amongst the prisoners, when he was not one!) 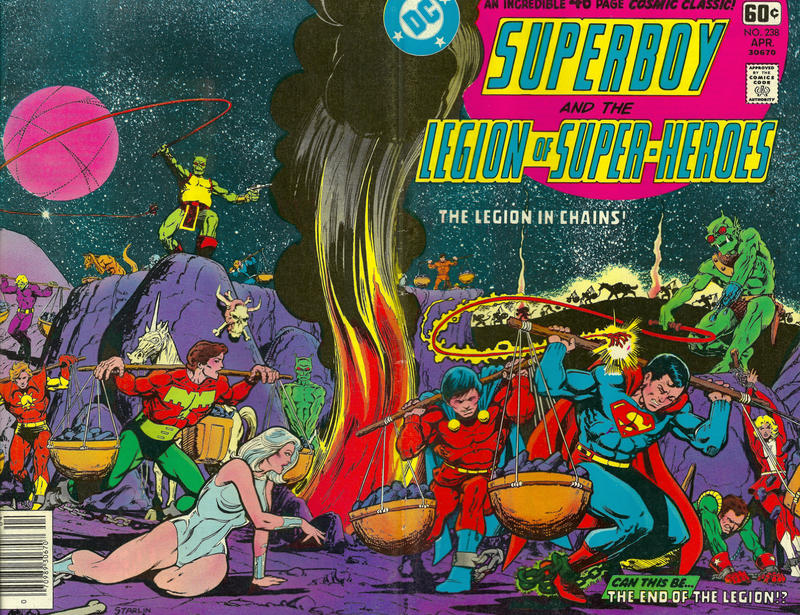 Roll Call: Everyone but Supergirl!