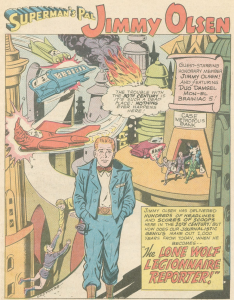 It’s pretty clear that, whoever the writer is, he had not written Legion before, or, if so, no often. Brainy calls Jimmy mentally from the 30th Century, and Jimmy responds that Brainy should use the time cube to pull him forward in time. These are not devices used in any other Legion story, and seem a little too far out from the Legion vibe to even be used by Jerry Siegel.

Jimmy is brought in to help finish the latest issue of the Legion Bulletin, which has been mentioned only once or twice before—definitely in “Evil Hand of the Luck Lords.” He’s to find interesting stories for the newsletter, which is now not just read by members and standbys, but by law enforcement agents all over the galaxy. Jimmy’s on his own, because everyone else is busy. Duo Damsel will be handling editorial chores, and, like Perry White, apparently can’t leave the office.

But, just to be safe, Mon-El gives Jimmy a signal watch tuned to Mon-El’s ears, then says he’s headed into space. Ummm… Mon? How’s the sound gonna travel? It must find some way, because Jimmy winds up using it, and Mon responds. (Of course, because, if you introduce a gun in the first act, you must fire it by the end of the play.)

The pre-Internet age writer’s assumption that print on paper would be an eternal medium is always amusing. Duo Damsel tells Jimmy that they have to have the Bulletin to the printer in three days. The Internet and the idea of non-paper storage and transmission of print data seems to have caught a lot of SF writers off guard. Even Star Trek, which showed us tablet devices and books being reduced to data storage, still featured paper printouts in its early episodes.

It’s a slow news day, so Jimmy is scrambling. He arranges an interview with the commissioner of the Science Police (who looks suspiciously like R.J. Brande), but can’t make it because he has to save a child from being run over by a monorail train. Interesting that the train still seems to run on tracks. This whole sequence seems off to a regular Legion fan because, though Jimmy mentions flying as an option to get to S.P. Headquarters, and rejects it because he might get lost, he never mentions that he has a flight ring. His flight ring probably would have allowed him to save the child (actually a lifelike doll) more quickly, and avoid using his own body to slow the train. It also would have got him to his interview faster than walking when he misses his train. Risk of getting lost or no, why didn’t he employ his flight ring? Again, probably because the writer was unfamiliar with the Legion.

Jimmy next decides to do a story about the differences in bank security between the 20th and 30th Centuries. But, well… basically, security procedures in banks have not changed since Jimmy’s time. Guys still get locked in the time-locked vault, and they’re still at risk of suffocation. But why the hell would a bank be allowed to own a security device that could destroy the city if detonated? That’s the reason Mon-El gives for not being able to force the vault door. Jimmy’s solution makes even less sense—how can Elastic Lad slip under a door that’s sealed so tight a man inside is in danger of suffocating? If air molecules can’t get in, Jimmy can’t.

Desperate for a story, and not realizing that, “Your Bank Could Wipe Out the Entire City!” is one hell of a headline, Jimmy visits a museum. Looking at a glass case of badges of police throughout history, Jimmy leans too hard on the glass and breaks it, setting off an alarm. So he runs. Wow. Way to be an example to the youth of America, Superman’s Pal. He doesn’t just wait, show his Legion flight ring (ooh, sorry!) or his press badge to museum security and apologize for the mishap. No, he actually assaults the guards and runs away.

And then he returns to the clubhouse and passes out. I just noticed in this story that there’s little consistency to the shape of the clubhouse. In the most recent Swan story, it was a straight cylinder. Now it’s tapered at the top. In John Forte’s days it also tapered at the bottom. Anyway, Jimmy passes out from exhaustion and awakens to find that Duo Damsel has finished the issue single—er—double­-handed. And he’s the focus of it all. He saved a robot protype, freed the guy in the vault, and caught the “Uniform Gang,” who were dressed as museum guards. No one bothers to mention that he thought he was attacking real guards and running away like a thug.

We close on Mon-El’s back-handed compliment: “Face it, Jimmy, as a reporter, you make a good hero!”