The new grout worked a lot better. The shower is almost finished as of tonight. I expect to finish the sink base this week and be ready for the plumber to come back. Coincidentally, the kitchen, which I have not been talking about thus far, should also be ready for the plumbers next week. The countertops are supposed to be in on Wednesday. 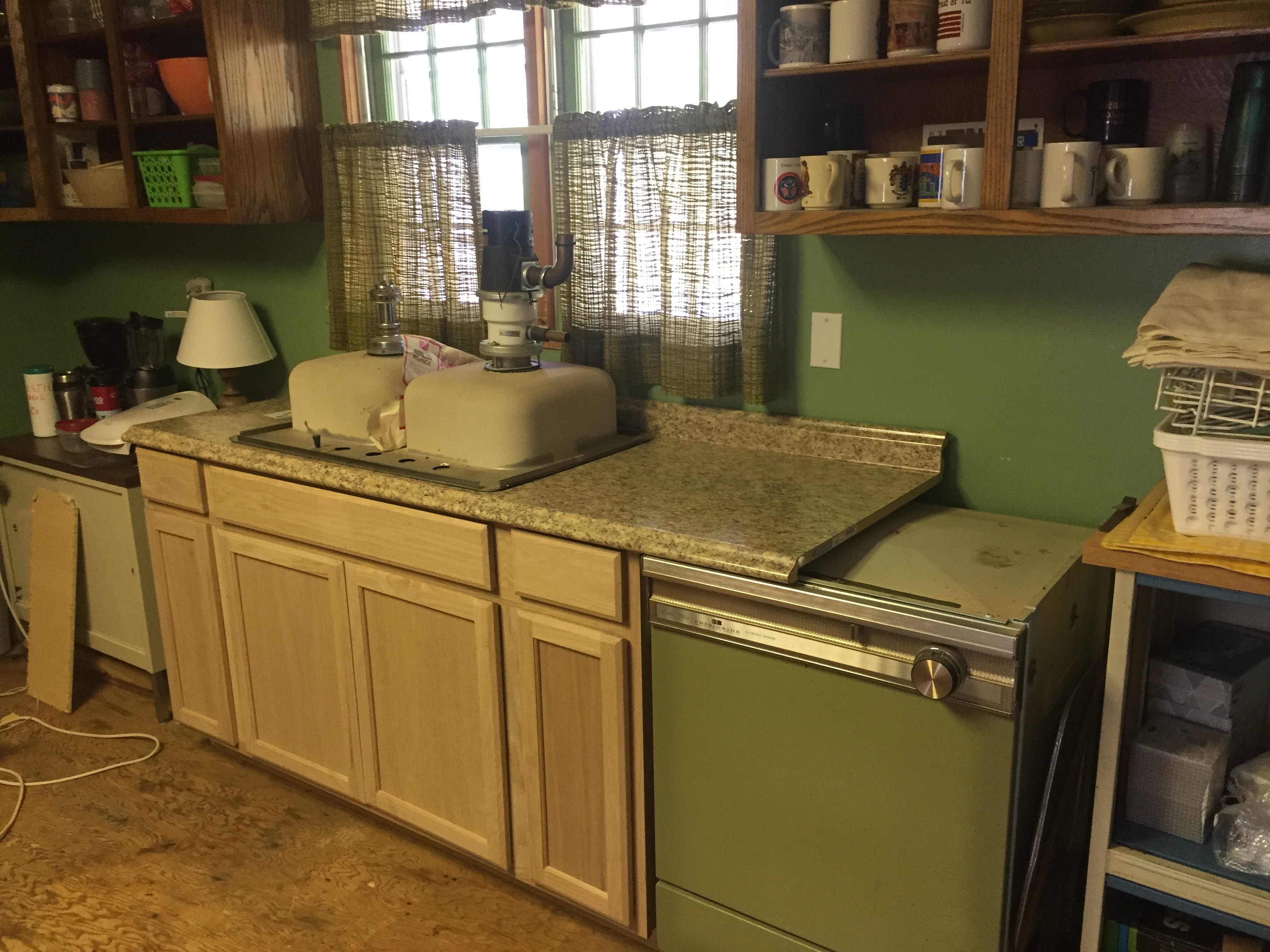 The kitchen, prior to the installation of all cabinets and a floor. Note the sink upside down on the counter. The installers decided to remove the disposal, and thus destroyed it and had to buy us a new one. This is a cleaned-up version of what the kitchen looked like for 50 years.

But I’m growing weary of talking about the bathroom, as I grow weary of working sometimes. My days, of late, feel endless, and, contrarily, fly by so fast that I hardly notice them. There’s just so much to do. I guess I’ve become a lot like you—always working, coming home from my job with a long list of things I need to get done and diving into them. Those things I need to get done include writing these letters, which I’m doing now even as I sit watching Marvel’s Inhumans with Renee, Ethan and Jessica. I also just invoiced a client and paid bills.

But there’s an important difference between you and me. At least, I think there is. You seemed to have a hard time not working. Oh, you would watch television in the evening, after dinner, while your food settled. As you got older, you became almost obsessed with television. It stopped being leisure and became your job. You recorded everything. You recorded something like 18 hours of news a day. News! You were one of the last people in the state of Maryland who still bought VHS video tapes. I think the local Wal-Mart only stocked them because of you.

Even doing something as apparently wasteful of your time as videotaping the news, though, you were working—checking the VCRs, pausing programs to cut out commercials, labeling the tapes you had made. You only “labeled” them by writing on the paper backing of the included labels. You didn’t want to waste the labels themselves on handwriting. Eventually, you planned to have someone type permanent labels. As the years passed, you even stopped writing on the backs of labels and started using PostIt notes. You stuffed the unused labels, rubber-banded together, into manila envelopes and stored them. I’ve found thousands of them.

But you were always working. Stopping to watch something with your family, or playing a game, or leaving the house to go do something recreational, these were all beyond your abilities. You just couldn’t bring yourself to “waste” time that way, not when it could be used to get work done. Our “vacations” were trips to our second home in North Carolina, where you would work on the house, or the property, or on your parents’ house, or someone else’s. There were a couple other trips—we went to Williamsburg a few times, but usually because you had a business meeting there, and you took us along. You did a little sightseeing, but not as much as the rest of us did.

Relaxation wasn’t in your nature.

I can be like that, obviously. Often at parties I get bored because I don’t want to talk about the latest television show, and I don’t really want to hear most people’s opinions about politics. I tend to withdraw, or at least try to talk to someone about an interesting project—a convention we could run, a play we could write and perform, an anthology of stories we could publish.

I’m really trying to change that about myself. We’re not here for long. You were here for 94 years, and you wanted more time. Strangely, you still couldn’t settle down and spend time with your family, and you couldn’t work anymore in your last years. You still wanted more time.

But we only get so much time, and I know that the most important times of my life, at the end, will be the ones I spent with my family. So I’m trying to change that drive to always be working. I’m trying to learn to relax.

Yesterday, after working all day Saturday at your house, Renee wanted to go to a Fall festival instead of pouring ourselves into work again. I found one at the Howard County Conservancy, a farm not far from you which has been dedicated to an effort to preserve open, agricultural space in our very crowded County, which used to be entirely occupied by family farms.

It wasn’t particularly high energy, but it was a nice day to walk in a garden, tour an old farm house, and visit exhibits. One was on beekeeping. Jessica wants to keep bees. We learned that the Howard County Beekeepers Association offers free educational seminars, and paid six-day classes for beekeepers. Keeping bees is one of the top recommended ways to monetize farm land, something I’m trying to find ways to do. I’ve looked into solar farming and boarding horses as well. Jess seems excited about the bees. Now, Mother, of course, just wrinkles her nose and says, “I don’t like bees.” But I think it’s a good idea.

The house you left us is expensive to run. If we’re going to keep it, we’re going to need money. It’s far too expensive for me to have bought on my own. I’m going to have to be creative. Although the political climate in Maryland is not good for solar farms, I also stopped to talk to a company that installs residential solar panels. They had a booth at the festival. I made an appointment to talk about solar panels for both of our houses.

I had actually looked into joining the Conservancy. We can deed your land over to their effort without giving up ownership. It just means placing a lein on the property so that it can never be used for residential development. It lowers the property taxes a little, but not enough to impress Mother. She doesn’t feel the savings make up for the reduction she would take in the property value. She worries about what might happen if we ever do need to sell it.

But I hope we never have to sell it. It would be like losing you again.

Okay, maybe I didn’t totally avoid work. These days, I’m always thinking about the house. But, overall, I relaxed.