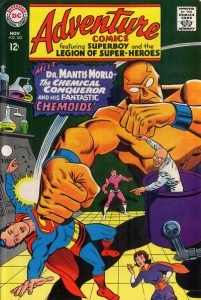 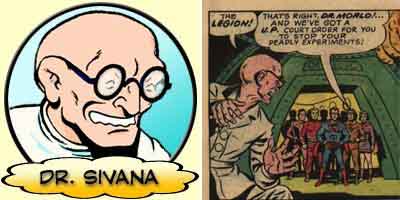 Before Mantis Morlo appears, though, the Legion enjoys some free time. This makes two issues in a row that the Legion has gotten a break, and this time out, said break gives us an opportunity to learn more about the Legionnaires themselves. Karate Kid paints, it turns out—a skill he picked up while studying flower arranging in Japan. I assume he refers to the art of Ikebana. We also see, for the first time in public, the marriage of Brainiac 5 and Invisible Kid as lab partners.

Alas, the lazy day doesn’t last. Brainy discovers, while monitoring the atmosphere, that gamma radiation in the atmosphere has tripled, and deadly gases are in danger of poisoning the earth. The Legion hops into a cruiser and heads to the source, a laboratory station orbiting the Earth. And it’s the laboratory of Mantis Morlo, who has no interest in shutting down his experiments, never mind the consequences.

By way of defending his position, he shows the Legion his accomplishments. He’s created a “miniature sun,” for instance. Like the real sun, Morlo tells the Legion, it’s “Chemically created.” That struck me as n odd way to describe the Sun. Yes, it involves chemicals being acted upon, but the Sun was born and grows via nuclear reaction, which is not a chemical reaction.

But it begs the question—could Condo (Chemical King) Arlik influence the fusion of a star? Or does his power draw the line at the periphery of the nucleus? Never mind, he’s not a Legionnaire yet, he’s just a future dead guy.

Invisible Kid shuts down the dog-and-pony show, insisting that Morlo must stop his work for the sake of the Earth. (If he were thinking creatively, it would have been nice to ask R.J. Brande to fund an alternate location for Morlo, but, based on the history we later learn from Brainy, it’s understandable.) Morlo doesn’t like this, so he sics Gorn, a Chemoid (chemically adaptive android) who is a lab assistant, on the Legion. I’m a Little disappointed in Lyle’s fist-first attack on Gorn. A genius with, I assume, the equivalent of at least one ScD or PhD should have processed Morlo’s explanation of Gorn’s ability to transform his body chemically, and known a punch to his gut would result only in an injured hand for the attacker.

Once Light Lass and Star Boy have given Gorn a more intelligent one-two punch, and Sun Boy has destroyed Morlo’s equipment, Morlo vows revenge and reveals that he’s hidden the bulk of his deathly collection from the Legion. As the Legion returns to Earth, Brainy recounts the Legion’s first (unpublished) run-in with him. Turns out he kidnapped and enslaved a number of people, and the Legion brought him down. “He had done no physical harm to his captives, so Morlo was given a short sentence.”

I find it hard to believe that, in any century, one is given a short sentence for kidnapping, enslaving and experimenting on human beings.

But Morlo’s threat of revenge is forgotten as other missions call the Legionnaires away. In a montage sequence that just begs for a Bill Conti 80s-film score, Saturn Girl, Ultra Boy (who aren’t in the roll call) and Cosmic Boy do good deeds, proving they’ve moved on, until…

Invisible Kid receives word that emergency calls have come in from Daxam, Orando and Naltor—”Urgent ones!” We’re not told what they are, but having the team split up and visit the home worlds of three members is a pretty nice shtick.

On Orando, Projectra introduces the Legionnaires to the King, her father, as “nobles of other worlds,” and they demo their powers. We finally learn that the emergency is that black clouds of smog are choking the atmosphere of Orando, and blocking the view of the stars by which the populace guide their lives. Orando is on a level of development comparable to Earth’s 12th Century, and so should not have smog, in theory. Although a large population, burning a lot of wood and coal still makes a mess. So we assume Orando’s population must be pretty low, or that they heat their homes with magic.

Interestingly, Projectra’s dialogue also suggests that this is not a completely new problem: “We of Orando believe that the stars foretell fate, and when huge black clouds blot them out for days at a time, it is a bad omen!”

And this bit of dialogue, as the smog overtakes a city, makes me disappointed in Projectra as a Legionnaire:

Brainy: “This smog… blackens and corrodes everything it touches!”

Jeckie: “We must stop it! If it reaches the palace, it will destroy the pride of our land!”

Really, Jeckie? A city is choking and corroding, and all you’re worried about is your golden palace?

Her standing up to the mob sort of justifies the royalism of this world, but it’s hard to stomach her being more concerned about the palace than about the suffering of the villagers. Still, Karate Kid finds her bravery admirable, and is moved to kiss her when they’re alone. This may be a first in DC Comics history—the actual evolution of a romance!

Val immediately apologizes for the kiss, and explains that Jeckie’s courage reminded him of someone he knew “long ago.” I don’t know that it was ever revealed who that someone was.

Brainy traces the black clouds to their source, and the Legionnaires develop a plan to diffuse the clouds at the atomic level. When they arrive at “the spot,” however, they find Morlo and a whole raft of Chemoids. This time, the Chemoids are prepped for battle and keyed to the Legionnaires’ weaknesses. This is pretty impressive, except that Brainy’s weakness is apparently “forgetting to turn on his force field.”

This feels slap-dash enough to be a one-parter, and that may be due to the lack of Curt Swan art. But it is, in fact, to be continued, and ends with Morlo’s cry to “Kill them, my Chemoids! Death to the Legionnaires!”