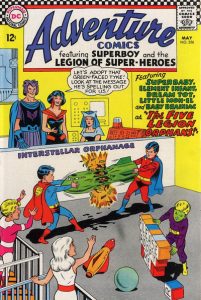 So, looking at the cover of this issue, you get that feeling you’ve been here before—not that long ago, either. Several Legionnaires were turned into babies by the Time Trapper back in Adventure #338. That wasn’t really an experience worth repeating, either, but Nelson Bridwell, filling in for Jim Shooter for the third time seven issues, obviously saw un-mined potential in the idea. It’s a different group of Legionnaires getting babified this, with just Element Lad taking a return trip to Toyland, and Superboy and Brainiac 5, who were the adults in the room last time out, getting shortened this time.

It goes down like this: It’s Parents’ Day in the 30th Century—a combination of Mother’s Day and Father’s Day, proving that the greeting card lobby is weaker in a 1000 years, but not powerless. Metropolis celebrates with a parade led by the Legionnaires and their parents. Well, that is just the Legionnaires of have parents. While Star Boy, Invisible Kid, the Ranzz Twins, Duo Damsel, Sun Boy and Cosmic Boy share a sumptuous post-parade banquet with their families, the Legion orphans—Supes, Brainy, Dream Girl, Element Lad, Mon-El—eat cold sandwiches and guard the clubhouse.

(It strikes me as a little odd that no mention is made of the fact that Duo Damsels parents should be able to split into three people each, as she shows off her powers to kiss them both at the same time. It also strikes me how sad it is that Invisible Kid’s mom is apparently a single parent, and she’s going to lose her son in a few years.)

The whole cold-sandwiches thing seems a bit insensitive, doesn’t it? I mean, couldn’t someone adopt these kids for a day? Funny you should mention, because it seems some people have that very idea. More to follow. Of course, the Kents have already adopted Superboy, but they’re long dead, and I’m surprised this story didn’t milk a few tears out of that fact! As it is, Mon-El and Dreamy play Queen for a Day with poor Element Lad, rubbing in the fact that at least they have some family, while his entire race is dead.

I guess it’s a good thing—and no coincidence—that a distress call comes in from a planet whose power crystal has been stolen. It powers an entire continent, and they’re in grave danger without it. Arriving on the paralyzed world, the Legionnaires learn that the heavy crystal was deposited in a lake for safekeeping, until the thieves could retrieve it. During this exposition, we see that Bridwell worked in a point about the potential weakness of electric cars—pretty prescient for 1967!

So Brainy, Dreamy and… Element… Lad… y… (Element Laddie?) dive into the lake, wearing special masks that pull the hydrogen out of water and leave pure oxygen for them to breathe. So they’re… basically three drunks who are burning up their lungs at a pretty high rate, ’cause breathing pure oxygen is really bad for you. But it was a nice try, Mr. Bridwell. They find themselves unable to lift the stone, however, because they’re shrinking. By the time they get to the surface, they’re, well, young. It’s hard to tell how old. The dialogue in the next few pages makes it clear that they’re progressively de-aging from teens to toddlers, but you never can tell exactly where they are in the process. Swan was an awesome artist, but apparently juvenile anatomy was not his strong suit.

Superboy and Mon-El arrive, learn what has happened, and proceed to—no—yes—jump… into… the same… lake…

Hey, that water turned our friends into toddlers! Let’s jump into it!

So the five Legion toddlers are taken to the Insterstellar Orphanage, where children of all species can be accommodated. No one comments on their very familiar (still form-fitting!) costumes. One police officer just remarks that a couple of these tykes are strong.

The caregiver at the orphanage explains to the children that she’ll try to place each of them with people from their own planets, and expects them to tell her what planets they’re from. On cue, Element Infant asks, “What ‘planets’ mean?” Look, they made him a baby again because he’s tow-headed and adorable, okay? And let’s face it, none of these kids are brains-trusts. They breathed pure oxygen and dove into a known-toxic lake!

Oh, but Brainy is still a brains-trust, isn’t he? He still has the presence of mind to tell the nurse his friends’ names and which planets they’re from. Superboy is introduced as being native to Rokyn, which Brainy remembers is the only existing planet where they speak Kryptonese. We’re told that this planet is where the refugees from the Bottle City of Kandor went to live. This prophecy came true, many years later in the pages of Action Comics. According to Wikipedia, however, this is the first-ever mention of Rokyn.

But Brainy gets his own home world wrong—he says he’s from “Yod.” He’s always been from Colu in the past. Most likely Bridwell just didn’t know. I’ve found mention on the web that this point was addressed in a letters column a few issues later, but I’ve yet to find the letter. The explanation (most likely written by assistant editor Bridwell himself) was that “Yod” was the name of the planet in the Coluan’s native language. Also, the Archives version of this story has Element Lad introduced as “D Jan of Trom.” The stray “D” is not in my copy of the original Adventure 356. Not sure what’s up with that.

But, seriously, with their names and homeworlds given, their powers on display, and one of their number being the well-known only survivor of his planet, no one recognizes that these are Legionnaires? And if Brainy’s 12th-Level mind was not affected by being made so young, why die he not immediately ask to call the Legion?

Someone buses in the Ministry of Silly Hats, and these adults adopt all the Legion babies, take them to the same planet, and move them into the same neighborhood. Brainy’s adopted father, a chemist, allows Brainy to use—or at least is too careless to stop him from using—his lab. Brainy concocts an aging formula, and everyone is restored.

And then we learn why the Legionnaires were turned into toddlers, and this story takes a turn from fun and silly to “Oh god this is the most awful story ever!” It turns out that the adoptive parents’ planet was hit by a child-killing plague, and all their kids died. We actually are shown a little boy dying in his father’s arms. The parents missed being parents, and learned that A) kids born on other worlds could still survive here and B) five of the Legionnaires were orphans. So rather than visit the Interstellar Orphanage and adopt children who need homes, they go to the trouble of luring the five Legionnaires to a planet with “Youth water.”

I can forgive everything but the child-dying panel. The good news is that Jim Shooter is back next issue.