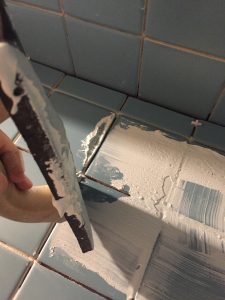 Well, I hate the grout I bought last week. I was going to use the grout you left me. It’s been sitting, under a table in Susan’s general purpose room, for almost 50 years now. But when I looked at all those bags, with the pretty pictures of Medusa on them, labeled “GROUT” in big letters, it turned out they weren’t actually grout. Not sure what that’s about, but, when you read the fine print, it says they’re thinset mortar for laying tile. So, while it’s clever and all that you would name a product that turns to stone “Medusa,” it’s not very useful.

But this stuff is awful!

It’s pre-mixed, which I thought was me treating myself to a time-saver. But, when I scooped it out onto my grout float, climbed up and started to apply it, it just fell to the floor.

All over the floor.

All over the floor of the shower and the (still unsealed, grouted) ceramic floor outside the shower. So I attempted to clean this mess up, stepped in grout, got more grout all over the floor, then climbed back up and tried to catch the mess of grout that was about to fall off the wall, wound up dropping my grout float…

Renee reminded me, after this incident, that you had always said that there was nothing so pointless as a discount paper towel. I don’t recall you saying that, but I do recall that we never had anything in the house except Bounty paper towels, so her story checks out.

Well we don’t have Bounty paper towels any more. Now we have… something. Some sort of… off-brand… something. These off-brand somethings are made of some kind of low-rent paper, maybe the paper that wasn’t good enough to comprise the pages of the National Enquirer. They don’t actually absorb anything, and they tear. You can’t actually get a whole sheet of them off the roll, ever.

Anyway, Ethan brought me a dish. Not a dishpan. I couldn’t really put my feet in that to wash them. He couldn’t actually find a dishpan. We’ve been doing a lot of cleaning, so naturally it’s very hard to find things. He came back with a broiler pan full of water. I got everything cleaned up, smoothed out the tiny area I had actually grouted, and then realized the grout was sanded. I’ve never seen sanded grout in a shower wall. I read up on it, and, no it’s not recommended for shower walls, because sanded grout sags.

I’ll say it sags. It sags right off the grout float.

And my poor grout float, that’s been with me for 30 years, that I bought at the no-longer-existent Color Tile to grout the backsplash of the kitchen in my first, tiny house on Standon Place, was bent in its fall. I also forgot to wash it in all the chaos, and grout dried all over it.

I considered getting an earring for my 30th, 40th and 50th birthdays. I didn’t. How much of that had to do with how scandalized you would have been, I’m not sure. I do recall my eldest nephew getting a tongue ring as a teen. He didn’t want you to know, so he avoided talking to you. And then you came and sat next to him on the couch and tried to talk to him. He was trapped, embarrassed, and we all had to leave the room to avoid laughing out loud.

Still, I know you’re shaking your head, and preparing to lecture me about the proper way to grout tile. In my defense, I’ve grouted a fair amount of tile in my life. I’ve never had the process involve as much shouting, damage and injury as this. Injury, yes. While trying to get a cloth to clean up the grout on my foot, I tripped over a trowel and cut my toe open. I limped downstairs yelling and cursing.

I think Mother thought you had come back to life.

Of course, you probably would have done a better job putting in the grout.

I’ll get it done though. This weekend. Maybe.

Please resist the urge to manifest and pull the float out of my hands. It would be really discouraging.