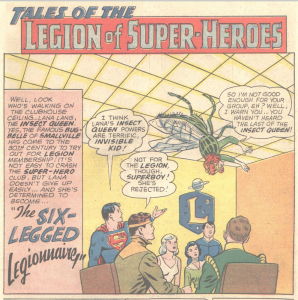 Rounding out an issue left short by an abrupt end to the Adult Legion saga, Otto Binder contributes his last Legion story, bringing one of his favorite characters, Lana Lang, to the clubhouse to apply for membership.

In 20th-Century Smallville, Lana catches Superboy changing clothes in a phone booth, but resists the urge to learn his secret identity, giving him his privacy instead. She knows that, if his identity were revealed, he’d have to give it up, and that would be sad. It seemingly doesn’t occur to her that knowing his identity might also expose her to personal danger. The women in Clark Kent’s life seem oblivious to the idea of danger.

As a reward, Superboy takes Lana to a Legion meeting. The meeting itself is a secret, so he leaves her to explore future Metropolis. It occurs to me here that Superboy must place a high level of trust in Lana, if he’s willing to let her wander unescorted 1,000 years in the future. Even a future city is still a city, but he probably figures that Metropolis is inherently safe and Lana doesn’t have the worst judgment in the world.

Lana has brought her Insect Queen costume and ring, and she uses them to get an aerial view. Along the way, she encounters and endangered space liner, and uses her powers to extinguish a fire in the engine compartment and save the passengers and crew. One of the passengers is Dream Girl, who tells Lana she handled the crisis as well as any Legionnaire would have, and also that she owes Lana a favor.

This puts an idea in Lana’s head—and, minutes later, she shows up at the Legion clubhouse as an applicant for membership. The application process is back to its old form, with no pre-tests to rule our Lana’s artificial powers, and no evident vote by the members. Invisible Kid lets her go through her whole dog-and-pony show before telling her she’s not qualified. At least he’s nice about it!

As she goes to sit with the rejects (ouch!), a distress call comes in from Ice City at the South Pole. Chameleon Boy, Colossal Boy and Shrinking Violet are dispatched. Lana, still hoping to prove herself, cashes in her favor with Dream Girl and asks for a prophecy. Dream Girl reveals that the Legion team is in danger, but that Lana must not turn into a moth today—that will lead to tragedy.

Superboy flies Lana to Antarctica and shows off Ice City—a metropolis carved from solid ice. The residents avoid freezing to death by wearing special parkas, and Superboy gets one for Lana. Strangely, the fully human Colossal Boy and Shrinking Violet never put on parkas. I suppose it’s possible the Chameleon Boy can adapt to extreme cold, but the question is never addressed.

Sure enough, the Legionnaires are in danger from an escaped criminal named Oggar-Kon, who plans to use fantastic technology to either melt Ice City, blow it away, or shake it apart. Nearly defeated, Oggar-Kon flings Green K dust all over Superboy. As expected, the only way Lana can think to save the love of her young life is to change into a moth-girl. She saves Superboy, but loses her bio-ring. She’s trapped in moth-form… forever. Well, it seems like forever. It’s until Light Lass demonstrates her amazing control over her power—she can make an object light, even if she doesn’t know where it is, and without making the other objects around it light. She causes the ring to float upward—from its place inside the secret pocket on Superboy’s cape.

Lana demonstrates real bravery in this story, and earns a place as a reserve Legionnaire. We won’t get to see her in action too many times, but there’s no denying she’s one hell of a Legionnaire. One wonders if Insect Queen would have run more issues than Superwoman did.