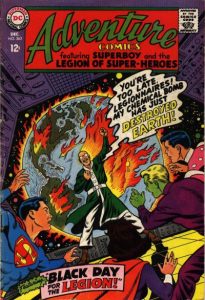 It takes a while for Part Two of the Mantis Morlo story to start. After the splash page, there’s a page of recap of the last issue, then the first actual page of news story just repeats the story elements already shown on the splash page. The Legionnaires, were left in battle with the Chemoids at the end of last issue, and they weren’t doing well.

Now they trade Chemoids, and their powers work well when used against a Chemoid who was adapted for one of their teammates. That suggests that the Chemoids are not as versatile as Morlo claimed, or maybe they just don’t adapt quickly enough to handle multiple opponents. Superboy takes out the smog generator that was endangering Orando. The mission is accomplished, but Morlo escapes, jumping off a flying platform and vanishing utterly.

We unfortunately, don’t get to see much of Daxam. It has big cities and a subway system, but we spend most of our time underwater, where Morlo is hiding so that he can avoid the effects of his own storms. The Legion catches up with him, destroys his equipment…. and watches as Morlo escapes again.

“There are now two Morlo hunts on two planets,” the narrative tells us. Does that mean that there are two Morlos? We don’t know yet. We do know that now it’s time to go to Naltor, the third Legionnaire home world being threatened by an emergency, presumably also one caused by Morlo.

We don’t get much of a geographical tour of Dream Girl’s world either, but we do get a lot more info about how Naltor works. It’s a planet where everyone can see the future. There is no gambling, because there’s no risk or chance or odds. Lawsuits are filed before accidents happen, and the parties settle out of court, because the outcome is known in advance. (I can’t help but wonder what’s done if the known outcome is that someone pulls a surprise witness.) The really baffling one is that stock trades are made “a month in advance” so that sales won’t deadlock because the prices are going to drop.

On the other hand, the idea that people don’t tend to vote in elections on Naltor, because the know the winner, leads to a panel that made me laugh out loud. One Naltorian announces a 1-0 victory, and another Naltorian cynically observes,

“Someone voted! Someone always does!” 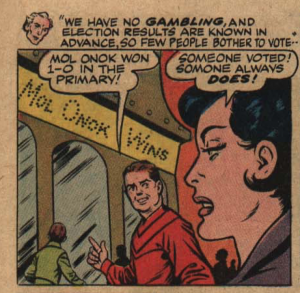 Now the Naltorians are having bad dreams—false images of what’s going to happen. Not only have they essentially been blinded, from their perspective, but the visions of doom are driving them mad. There are riots, looting, suicides in the streets. Invisible Kid exclaims, “Great Thallok! Who’s behind this?”

Well, we know the answer to that. What we don’t know is, “Who is Thallok, and why is a kid from Earth using his name in vain?” Nor do we ever get that answer. So, I guess, Thallok was just this guy, who, did that thing, back, you know, when.

Naltorian chemists, despite being at a disadvantage without their second sight, trace the hallucinations and failure of precognition to the food supply. Someone has been tampering with it. Ultra Boy’s penetra-vision allows him to peer through the planet and find the chemical plant which is poisoning the food supply, and its inventor—Morlo, of course.

They confront the mad scientist. He traps them behind an Ion force field. “Don’t anyone touch it!” barks Invisible Kid. “Ions are electrified particles!” Well, yeah, they are. But that doesn’t mean touching them is dangerous. There are all different kinds of ions, and they have different effects on the human body. I couldn’t find one case of them electrocuting anyone. But it doesn’t matter, because Star Boy defeats this trap. And that doesn’t matter, either, because Chameleon Boy’s antennae begin twitching, and he blocks the Legion from capturing Morlo.

We learn something new about our Durlan friend in this issue. His power records the shape of new things—that’s what the antennae are for. It doesn’t happen twice with the same person, so he knew that the “Morlo” on Naltor was a fake. And he deduced that wasting time capturing him would be playing into Morlo’s hands.

Still, even though an old and trusted friend says, “Wait!”, Ultra Boy says “Turn back to your own shape, or we’ll get rough!” Minor Bastard People emanations in evidence.

Once he gets his friends calmed down, we learn that there a four Morlos. Three are Chemoids, and the real one stayed on his orbital lab back home. From there, he plans to destroy the Earth. The Legion foils him by building a fake earth and gently pointing his viewport in its direction. Seems it would have been easier to just let Jeckie project an illusion, but perhaps Orando was too far away from the Naltor team, who wound up defeating Morlo.

There’s disappointingly less character development in this issue than in the last, mostly because, as the roll call brags, it stars every member of the Legion except Supergirl and Shrinking Violet. Supergirl got left out all the time, but Violet? Seems somebody just got forgotten.

Roll Call: Everyone but Shrinking Violet and Supergirl