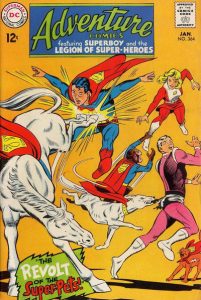 Ringing in the year of change, the Legion would, in fact, move backward. Though credited to Jim Shooter, “Revolt of the Super-Pets” is a piece straight out of the Jerry Siegel Oeuvre, with artwork, again, by Golden Age great Pete Costanza. To be fair, 1968 would bring us Mordru, Shadow Lass, Chemical King, Timber Wolf and the Dark circle, and probably some of the greatest artwork the Legion had seen to date. But this was an inauspicious start. 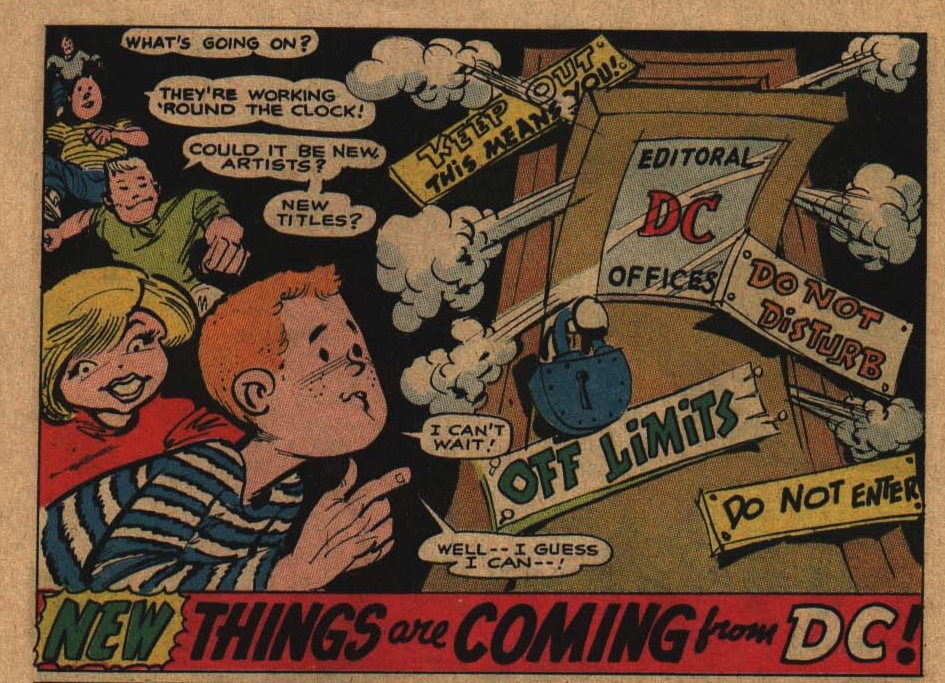 Upfront we have the “Coppertone Shot” on the cover, as Krypto tears Cosmic Boy’s shorts, exposing what appear to be tighty whities beneath. I can’t help but wonder if the colorist had to be told to not make the torn area flesh colored, for fear of shocking young readers.

The Super-Pets are frolicking in space when “Crime Machines” appear, rocketing for Earth. Just what a “crime machine” is, or what it’s designed to do, we’re not told. They look menacing enough, though. As John Lithgow’s character observed in 2010, “I don’t know about you, but that thing with its claws in the air would scare the piss out of me.” The Super-Pets attack. Then they go back to the clubhouse and report to the Legionnaires.

As is fitting for this type of piece, we have Bastard People on the prowl. “You fools!” barks Brainiac 5 when he learns that the Pets did not leave any crime machines intact and trail them to their base. And Invisible Kid tells them they’re not invited on the mission to trace the origin of the crime machines.

Unlike the human Legionnaires, who historically have an almost masochistic appreciation for being emotionally abused by their fellows, the Pets get offended by the Bastard People behavior. They decide to do something about their mistreatment by their human colleagues. First, they recount their origins.

Yes. We recounted our origins. That put you in your place, didn’t it? I bet you’re ready to accede to our every whim now, aren’t you, you loathsome, human toads?

Okay, it sounds better if you imagine Stewie Griffin is a Super-Pet.

This is a pretty light-weight plot, not really designed to fill 23 pages. A recount of the Pet’s origins is good padding. And, honestly, their origins weren’t recounted often. After the fearsome business of recounting is done, Saturn Girl tries to talk the Pets out of leaving the Legion, and Krypto and Streaky reflect on the fact that they’re saddened to leave Superboy and Supergirl.

A man named Rikkor Rost approaches and tells the Pets that the people of his planet worship them, and indeed have statues in their honor all over the place. He invites them to make his planet their new home base. They agree, and are teleported away. Meanwhile, the Bastard People—er, the Legionnaires—have discovered that this “tracking them to their home base” business is harder than it sounded, and they head back home to apologize to the Super-Pets… too late. It’s a little hard to feel sorry for the Legionnaires, though, because an unassigned line of dialogue has one of them saying, “It will be easy to smooth things over [with the Pets]. We’re human. We’re smarter than them!”

Evidence to the contrary not withstanding.

Supergirl shows up suddenly in Part Two to try and lure Streaky back, as the other Legionnaires try to convince the pets to come home. But they’ll have none of it. Chameleon Boy goes the most Bastard People of all, grabbing Proty II and trying to force him to come home. This causes the rest of the Super-Pets—sorry, the Legion of Super-Animals—to turn on their human ex-friends, driving them back into their cruiser and off the planet of the people who look to be the inspiration for the friendly aliens from Galaxy Quest.

But Rikkor Rost plants the seeds of doubt in the Super-Animals, and they come to fear that the Legionnaires are plotting against them. Proty, who can imitate a human, and Comet, who can actually become one at times, go back to Earth and masquerade as Legion applicants. Biron the Bowman and Blockade Boy (claiming to be the brother of the original Blockade Boy) are admitted. No sooner do they don their flight rings than the “crime machines” strike again. The rest of the Legion go after them, leaving their two newest members to guard the clubhouse and use the computers to check out clues. They quickly realize that the robot marauders don’t “vanish” when confronted, they teleport away. And their new benefactors, Rikkor Rost and the Thanlians, have the same power.

Heading back, they tell their friends and the Super-Animals confront the bad guys. But the bad guys are all-too prepared for him, and the former Pets are defeated—until the Legionnaires arrive to save the day. They had already figured out the Thanlians were behind the crime machines. They recognized Comet in his human identity right away, figured out the plan, and decided to let the Super-Animals discover the truth on their own.