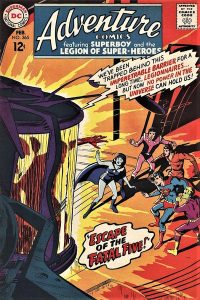 I’m not sure there’s any solid theory behind the concept of “anti-matter fallout,” either, but we’ll take it as read that no one wants his neighbor testing anti-matter weapons.

“Somebody has to put the skids on those warhawks,” declares the Legion’s colorful repartee officer (Brainiac 5.) Without so much as an explanation as to when a force of deputy law enforcement officers became a combination espionage team and elite strike force, the Legionnaires are ordered to go infiltrate a sovereign world and evaluate its military capabilities. They’re introduced to a subject matter expert, Shadow Lass, a native of Talok VIII, and its resident super-hero. She was barred from returning to her world when it went warlike.

An Impossible Mission follows, with the Legion being landed in the desert by sub-orbital skydive. How the ship that brought them escapes detection is not explained. They then trek across the desert for days. This part bothers me. Superboy is there. If they can travel at night, and Shadow Lass can visually obscure their moves, why does Superboy not just use his super speed and ferry them to the capital city?

Anyway, we learn as they go that someone in the capital is fully aware of their presence, wants them to arrive in fighting form, and is even aiding them on their journey.

Upon their arrival, however, and their subsequent infiltration of the citadel, they’re struck by teleportation rays from the walls. Karate Kid finds himself trapped inside a giant, hollow gemstone—from which the air is draining fast. Cosmic boy is in a chamber where he is attacked by large, non-magnetic balls. Superboy, despite his invulnerability, is in danger of being crushed to death inside a contracting sphere. Brainiac 5, his force field belt disabled, is caught between moving, spiked walls. Finally, Shadow Lass in a cell where brilliant lights shine and strip away her power. We learn that too much light can actually kill her.

As they’re all close to death, the Legionnaires find ways out of their prisons. Karate Kid finds a flaw in the diamond and shatters it; Cosmic Boy uses magnetism to crack the steel walls of his cell; Superboy bypasses the mental block that living among humans has given him, and lets loose all his strength to burst the sphere; Brainy modifies his broken force field belt into a force ray, and blasts a hole in the spiked wall; Shadow Lass can regain some of her power if her head is covered, and that’s enough to let her defeat the lights and find a hidden door.

We learn that Tharok is behind it all. He and the Fatal Five were not killed when Validus’s mental lightning struck the Persuader’s atomic axe back in Adventure #353. They were catapulted to another dimension. From there, Tharok was able to reach out, control the Talokian’s minds, and lure the Legion here. He engineered death traps for them, including one made of metal “from a red sun world,” which could hurt Superboy.

Ya know, Tharok, if you had just engaged a decent lifestyle consultant, she coulda told you that your future success would come through designing escape rooms. You coulda been beloved by billions. But, no. You went another way.

Always listen to your lifestyle consultant, kids. If you don’t, you’re probably a half-robot super-villain, and you will come to a bad end.

But at least Tharok’s plan worked like a charm. His escape rooms siphoned enough power from his captives to break the dimensional barrier, allowing the Fatal Five to escape, as promised on the cover, and return to the Legion’s dimension. But rather than kill their five enemies, Tharok orders the others to leave Talok VIII with him, and let the Talokian military kill the Legion.

As the issue ends, it looks like they’re going to do just that.

This is the first live appearance of Shadow Lass, co-created back in Adventure #354 by Shooter and Swan, but only as a dead Legionnaire in the Adult Legion story. Shady was a very popular character, and pretty much the one who broke the “we must fulfill all the prophecies of the Adult Legion story” fixation.