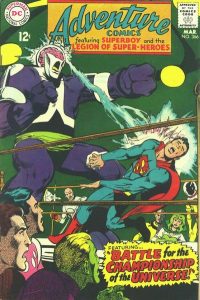 It doesn’t matter for long, at any rate, because the battle has barely begun when Superboy is thrown into an instrument panel by a kryptonite-laced ray blast. When it shatters under the force of the blow from his invulnerable body, the Talokians suddenly fall into a stupor. Brainiac 5 deduces that the wreckage is that of a mass mind-control machine, which Tharok used to take over Talok VIII in the first place. Nice bit of luck, it getting smashed just then. So, without so much as a “You guys okay?” the Legionnaires flee the Talok system and go in pursuit of the Fatal Five.

The Fatal Five, naturally, have headed to the only real planet in the galaxy—Earth. There they take over the Presidential Palace and the “30th Century equivalent of the Pentagon” which is, “weakly defended.”

Wait… what? Look, 30th Century (may I call you “Thirt?”), if you’re gonna have Pentagon, you need to damn guard it, okay?

To be fair, it’s the Persuader saying that the guard force was light, and he probably has pretty high standards. But, at his feet, there lies what for all the universe looks like one guy in a Roman Centurion’s skirt with a spear.

Tharok, who is using his now-heightened control over Validus to rule the Fatal Five, now has access to the Universal Weapons Control panel. With this, he can control every weapon anywhere in the United Planets. It takes two keys, and he has both of them—

No, it takes three keys, points out Mano.

So where’s the third key? Well, where else would you put one third of control of all the weapons in the galaxy? You’d give it to the teenagers in their clubhouse. (Must. Not. Make. Tidepod. Joke.)

Okay, sorry, but—no! Giving one guy control of every weapon in the galaxy was never going to be a good idea. It could only have sounded sane to brains mired in Cold War era brinksmanship. Does it not even give the denizens of the 30th Century pause that, for a few months, that one guy was Universo? And now it’s freaking Tharok—Tharok who now demands the Legion turn over the third key, or he’ll blow up Metropolis.

One sensible Legionnaire—Karate Kid—suggests the only sane course of action: to destroy the Legion’s key and see to it that no one, ever again, has control of all the weapons in the galaxy. No, says the boy raised at the height of the military industrial complex, the ability to destroy every sentient being is key to the security of the United Planets. So Karate Kid shuts up, and the Legion debates the <SARCASM>much saner options</SARCASM>of letting Metropolis be destroyed or giving Tharok the literal keys to putting 300 million people in slavery. (I believe that was supposed to be the population of the United Planets. Interesting, since the population of Earth was already 3.5 Billion when this story was published. Either Shooter expected the intervening years of war and disaster to seriously thin our herd, or he wasn’t paying close attention in his social studies classes.)

They come up with a counter offer to Tharok: They’ll battle the Five for the right to control the weapons of the galaxy. Superboy, Karate Kid, Cosmic Boy and Brainiac 5 damn near lose their battle, but a wounded Shadow Lass defeats the Emerald Empress by letting the Emerald Eye beat on her until it’s drained of power. (How she knew it could be drained of power is not explained.) Then she makes the battlefield pitch black, and her comrades easily defeat their opponents.

The Five escape again, and the clubhouse has been destroyed by Validus while the Legion deliberated over Tharok’s ultimatum.

Shadow Lass is the first Legionnaire to be inducted in the midst of a battle, with no interview, no testing. Of course, she did just spend days on a mission with them, and they do think they’re about to die. It’s kind of a no-brainer.

A fun story, but with a whole lot of flaws. Perhaps its greatest strengths are the introduction of Shadow Lass and the fact that a female Legionnaire is allowed to absolutely save the day—by making it night!—even if the story mechanism that gets her there is a little rough. There’s also a nice moment in which Shady reveals a crush on Brainiac 5, and he seems rattled by his own “illogical” response.