I just walked into the office, and, Rick, one of my co-workers grabbed my arm and asked, “Are you all right?”

My Deputy, Tom, said, “You look dead on your feet.”

“You look like you went fourteen rounds with the Tormentor,” Rick added. (No, I don’t know who “The Tormentor” is.)

After I checked in with everyone and answered the usual round of a dozen questions (that’s per person, for five people in the office) I had a chance to go to the bathroom. Washing my hands, I looked in the mirror.

I mention this because you were convinced, for the last two years of your life, that I was coloring my hair. I almost mentioned it at your funeral. Your mother once said to me, “I’ll bet Ed’ll have you in school ’til you’re gray-headed!” I almost added that story to my eulogy, with a note to myself to flick my hair and say, “I should have taken that bet.” I cut that part out. It seemed a bit vain.

All right, it seemed a lot vain.

But I do think that it’s funny that you thought I was coloring my hair. Your mother died at the age of 87, with almost all of her hair still about the same color as mine—maybe a little darker. When they laid her out in her casket, they didn’t comb the gray behind the rest, as she must have. Or maybe she just gathered some gray hairs during her last month in the hospital, as her heart slowly died. Either way, Ma in her casket had more gray than any of us had ever seen on her, and she still had the hair of a woman in her 40s. She never colored her hair. I guess I just inherited some of her Cherokee blood. DNA. Whatever.

Come to think of it, you didn’t really go all gray until your sixties.

But now I have quite a few strands of gray peeking out. And my hip flexor occasionally radiates pain up into my lower back and my groin. And my right elbow hurts so bad that some days I can’t lift a hardback book one-handed. And my left knee locks, sometimes from the front, sometimes from the back.

Time is taking its toll, I guess. Time, and, perhaps, days that are too filled with work. But I like getting things accomplished. And I’m trying to tell myself that, at the end of the day, that—okay, I’m trying to tell myself that there has to be an end to the day. And that it’s all right, at that end, to sit down, listen to some music, and pick up a book. Or two. Or three.

Music. Right now, I have Prokofiev’s Romeo and Juliet playing. You would not approve. You called classical music “noise,” which distinguished it from Rock ‘n Roll, which you called “That beat-beat music.” Still, you were furious with me for talking during the news when Elvis died, but wanted to turn off the television (No, that would have been sacrilege. You must have just wanted to change the channel.) when John Lennon died.

Why did you hate music, as you got older? I wish you could tell me. I understand your not liking rock or alternative. Very few of your generation did, just as my generation doesn’t like rap or hip hop. Your musician grandsons, who prefer 80s music if they’re honest, have explained to me that there is artistry behind hip hop, at least behind some of it. I have trouble hearing it.

But your dislike of music was not generational. As you got older, you just did not want to hear it played. The times I drove you to your doctors appointments these last three years, you would demand that I turn off the radio, or the MP3 player, because you didn’t want to hear “that noise,” even if it was Glenn Miller. Your next to last Easter, you came and sat at the breakfast table and demanded that Christian turn off the music he had set up.

What happened? You taught me “Sweet Betsy from Pike,” and “Red River Valley.” You loved Swing music. You knew all the jazz standards. You were even known to sing Peter, Paul & Mary lyrics, but as an old man, you hated music. I’m sorry to have to call you an old man, but, bluntly, there came a day when I looked at you, stooped, white-haired, suddenly shorter than me, and realized, “My father has become a little old man.” It happened very quickly. For me, anyway.

The last times you got in my car and demanded I turn off the music, I told you it was my damn car and you weren’t in charge. I won’t apologize, because you were being horrible. I just wonder what happened. You made me love music. Why did you turn on it?

Fortunately, your grandsons, especially Christian, who I swear is just you reincarnated, have taught me to love music again. The happiest times in my life are when I hear Christian sing. Maybe because I miss hearing you sing.

Enough. I set out to write about the new furnace, and I’ve gotten sidetracked. I’ll stop here. Tomorrow is your 95th birthday. More then.

PS: I’m writing this in your library, at the desk you bought and refinished in the back yard of your house on Keebler Road in King of Prussia, PA. That was before I was born. Charles is downstairs at the basement entrance, going to check out that new furnace. He’s fighting with the storm door, which no longer closes. I opened the window to let him know that I’d found the frame was loose, and I was going to reattach it as soon as I find time. When I closed the window, I saw letters on the glass at the top. “Morgan.” “Morgan Fine Windows.” The impression from the paper label is still there after 50 years. Amazing. It’s like the house knows it’s really still new, still waiting to be finished for its family. 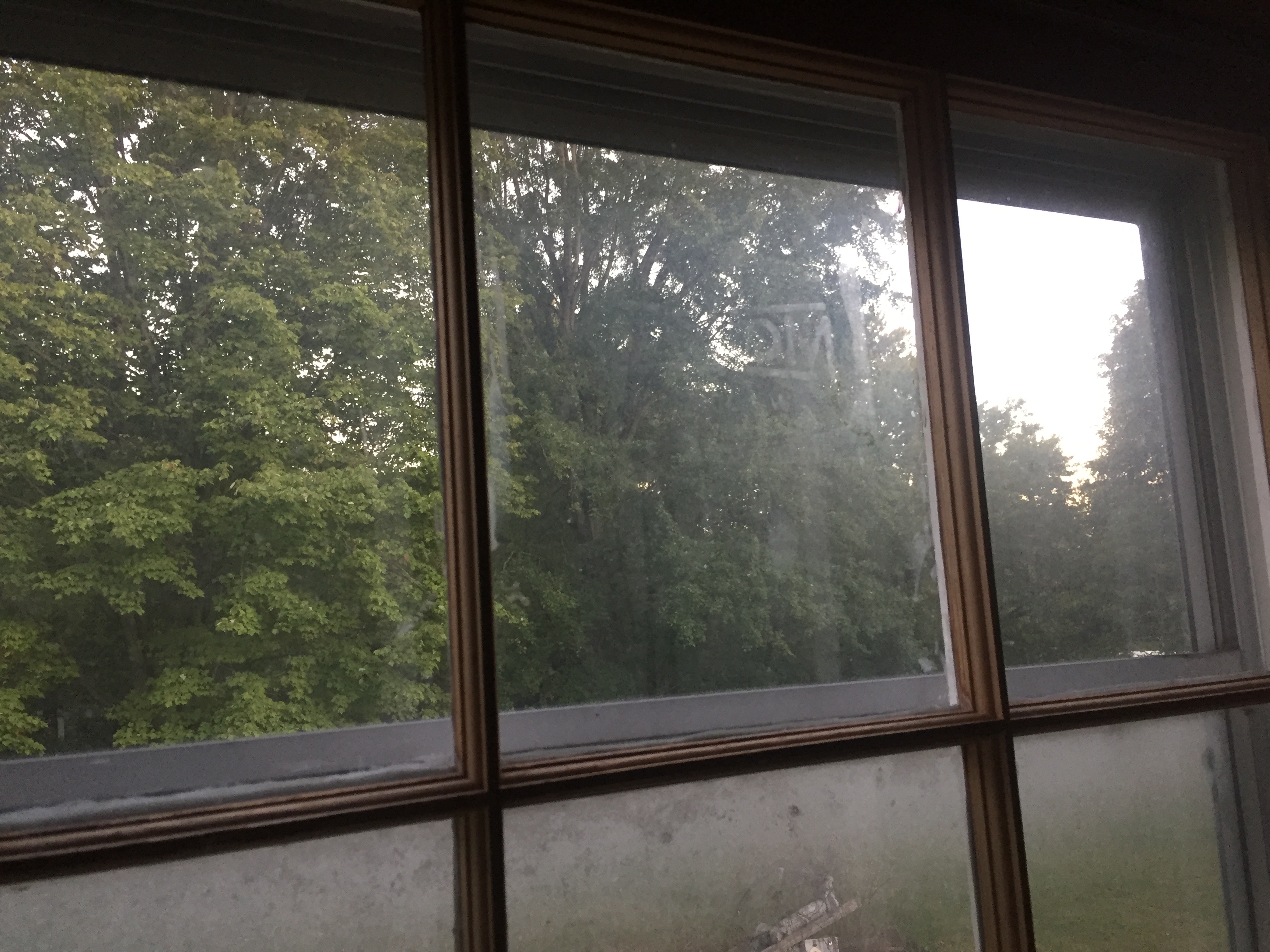 The dickens with gray hair, as you would say. I would say something more vulgar that would raise your eyebrows.

The dickens with gray hair. My house is still young, and so am I.