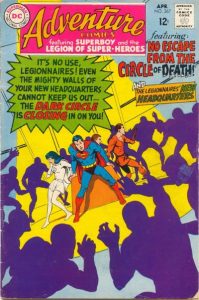 In keeping with the fortress analogy, the first feature of it that we see is the weapons room. After that, there’s the memorial hall, and the dormitories are mentioned. The Legionnaires will apparently be living on premises now. In the meeting room scene, there’s a striking half-page action shots like the boys being fired from ejector chairs.

The Marvel look is back, with many four-panel pages, and action-driven panels. One wonders why, even in some of the Shooter-Swan stories, it lapsed for a while. It makes the book standout amongst DC titles of the time, and tells the story much more effectively.

After the Legion receive enough gifts from grateful world governments to fill their whole compound, including a fleet of space cruisers and a mysterious, boxed device, we cut to a shadowy room far off in space, where hooded figures identify themselves as representing the five worlds of the Dark Circle alliance. They decide that now, with the Legion focused on its headquarters and many members on leave, is the time to strike against Earth.

The Dark Circle knows about the “Universe Control Panel” (last issue it was the “Universal Weapons Control Panel”)—driving further home the idea that the very existence of this thing, which lets Earth control all the weapons in the United Planets, is bad news.

Karate Kid, meanwhile, is vacationing in Japan. I mentioned during the “Outlawed Legionnaires” that Val had talked about contacting “his folks.” Here he reveals to us that his “folks” are the people of Tokyo, where he grew up an orphan. In particular, he goes to visit the man he calls “Master,” who took him in and taught him Karate. This much time being devoted to the personal history of one Legionnaire is something new, and it’s a refreshing change.

Sadly, it doesn’t last. The Dark Circle strikes with infantry, tanks and drones. They’re taking people hostage left and right, and they leave Val’s Master injured and his home in ruins.

Back in Metropolis, the Dark Circle forces storm the Legion Headquarters and make short work (surprisingly) of Duo Damsel, Superboy, Cosmic Boy, Lightning Lad and Phantom Girl. Only Brainiac 5 is left to fight. He searches through the crates of gifts, wishing Karate Kid, at least, had not left to go to Tokyo. There’s a flash of light from an open crate, and Karate Kid is there. While the Kid holds off attackers, Brainy unpacks the mystery device, the one that flashed when he wished for help, and begins to concentrate.

The Dark Circle forces are driven back to their worlds, the new Legion Headquarters is completed (saving the taxpayers a boatload of money, we can only assume!) and all the damage from the attack is repaired.

This story puts the machine in deus ex machina, introducing the Miracle Machine, which would be the MacGuffin in quite a number of Legion stories to come—usually when somebody wanted to steal it. Brainy has figured out its secrets, and deduced that it must come from the Controllers’ universe—the parallel world they discovered during the “Ghost of Ferro Lad” incident. Indeed, a Controller appears, and cautions the Legionnaires to use his gift wisely.

Superboy encases it in Inertron, and they vow to leave the machine unused… mostly.

But y’know, it could probably bring back Ferro Lad.