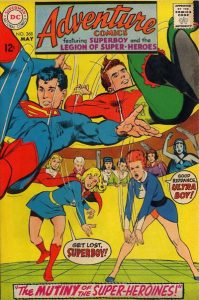 Wrapped in the exciting packaging of Shooter and Swan in 1968 comes a derivative plot from four years previous. “Revolt of the Girl Legionnaires” also concerned a matriarchal, alien world trying to control the female Legionnaires to their own devious ends. Only that time they just tried to lure the boys into romance so they could bring them down, one by one. This time out, the girls gain greatly enhanced powers and attempt to show the world how useless their male comrades are.

It all begins when a spaceship carrying an ambassador falls from orbit. The Legion races to the scene, only to discover that the ambassador has saved herself, using super-strength to move the wreckage. Star Boy is a little too surprised that the ambassador is a woman in this 30th Century supposedly committed to sexual equality. Ambassador Thora is introduced to President Boltax, although she admits that, coming from a matriarchy, it’s hard for her to deal with men being in charge.

After the State duties are attended to, the kids head home and resume decorating their new quarters. Karate Kid, who only last issue had an apartment, makes a point of showing Superboy that he’s moved in and adorned his rooms with his ancient collection of ancient weapons. The female Legionnaires, we’re told, are adding more “feminine touches”—you know, rugs, curtains… the stuff men don’t have in their rooms.

Seriously, it’s a bit much to show the girls sewing their own curtains. Supergirl I could believe. She’s from the Sixties. But the others? As I mentioned in reviewing the last battle of the sexes story, the attempts of Sixties mass media to address gender politics usually wound up stereotyping really badly. This story is no exception.

Thora secretly fashions gold statues of the “Legion Lasses” and bathes them in radiation. All of her targets suddenly develop enhanced powers—Supergirl is no longer vulnerable to Kryptonite, Projectra can cast solid illusions, Duo Damsel can multiply her bodies to infinity—only Dream Girl is not given an enhancement. Several of them immediately employ their new abilities on a series of missions in which they save their male counterparts.

Brainiac 5 and Invisible Kid prove to be real Dudley Downers, postulating that these increased powers are the result of a “rare space disease,” and that the girls will be dead within 72 hours. Invisible Kid orders them into quarantine. Thora, watching, steps up her radioactive attack. When the girls see that the boys are in danger on a mission, they break quarantine (literally—Supergirl punches through a wall—are there no doors?) and fly to the rescue.

Invisible Kid is furious, and a fight ensues—a fight the boys lose. Light Lass declares that they’re all too weak to be Legionnaires, and they’re out. Leaving, Supergirl seems to have reservations—especially when Shadow Lass fantasizes out loud about making a slave of her beloved Brainiac 5.

For unknown reasons, the boys take their summary expulsion lying down (and no one even quotes the Legion Code!) and go to live in a downed Legion cruiser. There, they monitor emergency broadcasts and plan to carry on in exile. Their first call for help involves a sea monster attacking a desalinization plant. Lightning Lad and Star Boy don’t fare well, and Dream Girl, Projectra, and Phantom Girl arrive to save them. Interestingly, Dreamy says that it was her power of precognition that let he know they were in danger. It leaves the reader to wonder, weren’t the girls also monitoring and answering emergency calls.

Projectra calls the sea monster, “An ugly cuss.” An odd phrase for the dignified royalist to use. At least she didn’t lower herself to manual labor in the dorms, though. She lounged on the couch while the commoners made curtains.

After a few more adventures, during which Supergirl admires Thora’s inverse charm bracelet, the girls decide it’s time to take over Earth and make it a matriarchy. Thora offers to lead the revolution. Supergirl, in thanks, gives Thora a charm to put in her bracelet. But the boys, returning to HQ, have overheard. They confront the girls, and a second battle begins. Thora, watching, decides to deliver her coup de grace, using her radiation bath directly on the heroines so that they’ll kill the male Legionnaires.

Her bracelet explodes. Supergirl was faking it, and had figured out the source of Thora’s power over her fellows. Her mind threw off Thora’s control as soon as she realized what could happen to her beloved Brainiac 5 in a “feminist” world. Interesting on a couple of counts. For one, this is the most effusive Kara has ever been towards Brainy. Their last romantic encounter was a quick kiss in Adventure 350 when she thought they were parting forever. Now her feelings for him are strong enough to throw off alien mind control that the others couldn’t get past at all. For another, her use of the word “feminist” clearly refers to a philosophy which would place women in legally and politically superior positions over men. This is one definition of feminism, but an extreme one, and probably not the one which was beginning to gather steam in 1968.

But the best part of this story is that Supergirl finally plays a key, heroic role again. It’s been dozens of issues since she did. And she ends the issue in an embrace with Brainy—ironically over Thora’s dead body.