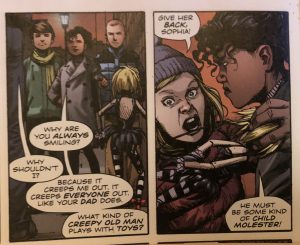 These two images are from the latest issue of DC Comics’s Doomsday Clock. They especially resonated with me for a couple of reasons. In the first, three bullies have accosted a young girl, the daughter of an immigrant puppeteer in New York City (or is it Gotham City?). The girl, Erika, is walking with one of her father’s marionettes when the bullies approach and confiscate her toy.

The lead bully insults Erika’s father and asks what kind of grown man plays with toys. In the second panel, the same bully concludes that the puppeteer must be a child molester. This is common thinking amongst the ill-bred and under-educated: if someone is different in some way—any way—they probably molest little kids.

Hatred of the different can lead to genocide, like the blood libel—the story that dates back at least to The Canterbury Tales, saying that Jews kidnap Christian babies and drink their blood. Less drastically, it can lead to defamation. Just in recent days, we’ve seen James Gunn accused of being a child molester based solely on off-color jokes, and we’ve even seen his supporters accused of the same crime—all on no evidence. They’re different from football-watchin’, bud-swillin’, Mercans, so they must be PRE-verts. However large or small the instance, all prejudicial hatred of the different is, at its core, the same stupid impulse.

In the case of Doomsday Clock, it’s just one of many cruel things that happen to Erika, who grows up to become the super-villain called, appropriately, Marionette, and her partner The Mime, the nominal anti-heroes of the story. The puppeteer’s abusers include people more dangerous than the ill-fated little bastards from these panels. Those abusers eventually drive him to suicide.

Marionnette and The Mime are not nice people. They’re villains who pull the heads off of others and laugh about it. They get a lot of back-story, though, and it’s a very sad back-story, illustrating how children who are abused can take their pain and turn it outward, becoming abusers themselves. Not an excuse for their behavior, just an explanation of how a broken human being can come to be just that.

This sad little sequence resonates with me in particular because my son is an action figure collector—has been since I bought him his first Batman figure when he was two years old, followed by a selection of X-Men figures for his third or fourth Christmas. He now owns something on the order of 5,000 figures. He just turned 26, and he not only still collects, he’s become one of the top action figure review bloggers on the Internet. He’s partnered with our local toy retailers and is beginning to be tapped by manufacturers to help the with promotions.

He was teased as a child, mostly by other children, but sometimes by adults, for his love of action figures. It made him doubt himself. It made him wonder if there was something wrong with him. It made him feel shame, and not want to talk to others about the thing he loved most. But it didn’t make him give up action figures.

Okay, so all kids go through this, right? I was teased for drawing “space ladies” in school. My wife Renee said she didn’t dare admit she was from a family of Star Trek fans. If you happen to like something that isn’t the thing of the moment, you’re not of the Body! And declaring a love for the thing of the moment won’t even save you from the villagers and their pitchforks if they just plain, damn don’t like you.

Wrong, as these panels illustrate. Recently, some adults in my son’s life have again taken up the cry that grown men don’t play with action figures, and don’t have them sitting around their home.

Well, we’re all fans, here, right? We beg to differ, right? I bet a lot of you have action figures on your desk at work, don’t you? Or a super-hero mug. Or a Game of Thrones image on your phone’s lock screen. It’s become chic to be a nerd and display your status with pride. Look at all the money the Marvel movies are making! Look at NPR listeners who’ve never cracked the cover of a comic book, flocking to see Gal Gadot in Wonder Woman! Fandom is finally cool.

My house has action figures and comics memorabilia in every room. In. Every. Room. The kitchen has an Artoo Detoo timer on the stove. The dining room has Wizard of Oz plates and super-hero glasses on the shelves. The family room hosts Renee’s Barbie collection, including everyone from Oz and both DC and Marvel heroines, plus my Legos from childhood and my Mego action figures. There are Ethan’s early super-hero prints in the front hall, being guarded by a life-sized Lego Aquaman standee. The bedrooms hold my Star Trek figures, Renee’s stuffed animals, Ethan’s Hot Toys Avengers and Christian’s retro video games. The bathroom is an Aquaman shrine. (The Lego standee was supposed to go there, but there’s just no room!) Even the formal living room is graced by our Lego Main Street buildings, my DC Archives and the Robert Heinlein Virginia Editions.

I collect books. I literally have enough to establish a private library. I have comics and magazines, ViewMasters, vinyl records (yes, they still make them!), robots, and toy spaceships. One of my co-workers has a practical movie Batman costume and a pair of Christopher Reeves’s Superman boots in his man cave. My grandfather had model trains. I have them too, though I’ve never had time to set them up the way my old boss did, occupying a third of his huge basement. He “played with his trains” into his late 70s. Interestingly, I just re-read Heinlein’s Double Star, in which the Emperor of the known universe was a model railroader. And, yes, his friends said it was no hobby for a grown man.

But grown men—and women—very much play with toys, and not because we’re child molesters. Why is that? Theodore Sturgeon advanced one theory, in his script for the Star Trek episode, “Shore Leave.” “The more complex the mind,” he told us, “the greater the need for the simplicity of play.”

But I’m less interested in why some of us like to collect and “play with” such things as I am in why it’s such a problem for some of those who don’t. Why the criticism? Why the rancor? In short, I want to ask them, “What the hell are we doing to hurt you?”

That must gall them. They’ve worked so hard to be normal, and here we are saying “Why be normal?”

And dammit, the heavens do not darken! God does not smite us. The FBI is not at our door.

That’s not an atmosphere I want to live in. I hope you feel the same. I hope, when you hear someone make fun of someone else’s passions, kid or adult, you’ll call them out. I hope you’ll make it okay for all of us to love, to have fun, and to say, “No thanks” to membership in the in-crowd. Above all, I hope you’ll realize that running your own life is hard enough. You probably don’t have time to run everyone else’s.