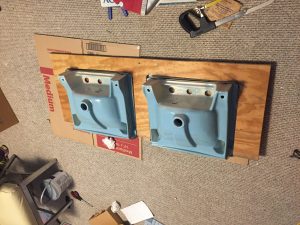 I’m sure you’ll agree that a sink is a silly thing to cry over, much less two sinks. Nevertheless, when I had mounted the two regency blue sinks into the mosaic tile countertop this afternoon, and flipped it over to ensure that they had a chance of staying mounted when gravity was applied, I found myself in tears. I literally burst into tears. It was the sense of relief, I guess, and gratification that the job was almost finished. 45 years ago it must have been that you described to me a bathroom with dual sinks on a long counter, gracing that upstairs bathroom. I envisioned something grand and luxurious, something classy and swank. Two sinks, on a long countertop. It was the sort of thing you would see in the restroom at a high class restaurant, the kind where, my sister assured me, one did not order a hamburger. Where one ordered steak and had a beer on the rocks. 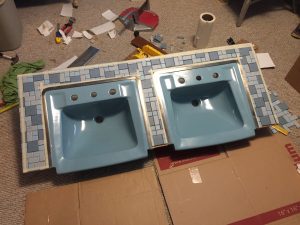 All right, I didn’t know anything about fancy restaurants 45 years ago, but I knew you were designing something special. Today I see a five foot by seven foot space, practically a closet, with 53 inches—no more, says the plumbing code!—for the countertop. I see ragged edges on sheetrock, bare wire in unfinished outlets and switches, a shower stall with a ceiling that’s a quarter-inch lower on one side than the other… I see a project I’m working on, not a grand plan.

But seeing those two sinks in a countertop I had cut by hand, bedecked with mosaic tile which I had also cut by hand, mounted with hardware from a time 50 years gone, about which I can barely find information any longer…

I burst into tears. Of all the things I’ve done so far, that one said to me that your dream was becoming a reality. Oh, I’m sure the work wasn’t up to your standards of perfection, but I had done it. That was the thing. I had carried out your plans, albeit with a few modification as a nod to modern style and building technology. 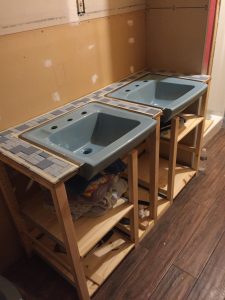 I got over it pretty quickly. It was overwhelming, though, for a moment.

Now back to that furnace. Before Winter set in, Mother and I agreed that the house needed central heat. In your last years, you were too weak and too confused to maintain your oil stove. You had instead run a 220 line to the family room, and plugged in an industrial space heater. Your electric bill was atrocious—an extra 4000 kilowatt hours each month in the cold months. That was not a sustainable answer to heating the house, especially if we were going to use the rooms upstairs and on the other side, far away from your heavy duty heater.

I called the heating contractor who handles my house. You surely remember my furnace, a converted Red Square coal burner that must be over a century old. It’s sealed off as a fire box for an oil burner. Technicians who have come to clean it have variously told me that I should keep it forever or that it needs to go now. But this contractor has done a pretty good job keeping that old beast running and keeping my radiators warm. I figured they could get your half-century old oil furnace up and running.

The first guy they sent was the wrong fit. I knew we were in trouble when he got out of his truck and asked, “So you need a tune-up?” When I showed him what I needed, he shook his head and said, “I got nine customers on the schedule today. I’m gonna have to cancel all of them, but I guess I can do it. Let me call Dispatch.” Fifteen minutes later, he came back and told me that he and his dispatcher agreed that a new furnace would be the better bet. It would save money in the long run.

“I’ll need to see those numbers,” I said.

He shook his head again. “You want the install team. I just know you need a new furnace.”

Well, I wasn’t going to let the dispatcher who had never seen our furnace, and who I was pretty sure just wanted his other eight customers served, make the decision. I said, “Get me the install team.”

A week or so later, Dave came out. Dave is the “Comfort Care Specialist.” We liked Dave very much. He liked your furnace very much.

“American Standard,” he said, wondering. “They got out of the heating business the year I started in it.” He observed that, “This thing is in amazing condition.” He checked the plates and found that it had, indeed, come off the assembly line in 1968. He traced electric lines with me, looked at the installation of the thermostat and emergency switch, looked at the old oil stove and its fauceted line. He also shook his head and said, “It’s amazing how the human mind works, isn’t it? I can tell by looking around this place that your father was some kind of genius.” (The furnace is, of course, in the basement that’s still at least half-full of your analog electronics collection.)

“Your dad was three hours from done,” Dave told me. “Three more hours fifty years ago, and today you’d be asking me to replace a furnace that was worn out.”

Three hours. But it was three more hours that you needed for something else, wasn’t it?