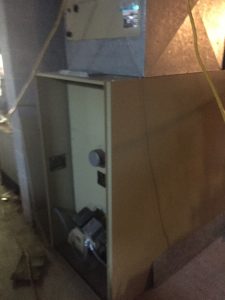 I was telling you about the new furnace. Dave, our Comfort Care Specialist, was very upfront about everything. He looked at our 50-year-old oil tanks and said, “You might want to replace those. They have copper pipes, and a spillover fill system that we no longer use. The solder in the pipes can burst under pressure, and we spray that oil in at about 300 gallons per minute.” He quoted us a price for new tanks, but said, “You can wait and see how they do.”

He quoted us a price for getting the old furnace going. He was very patient about it. We reviewed everything that could go wrong with the old furnace. The burner motor (the “squirrel cage”) could have seized from years of disuse. The fire box could be corroded inside (though Dave thought that very unlikely). If we had to put in a replacement burner, the fire box might not be rated for the much higher heat generated by modern burners. (Not an issue with the dinosaur in my own basement, I guess.) Finally, even if all went well, both American Standard, who made the furnace, and the company who made the burner were now out of business. There were no parts available to order, so anything that went wrong would not be covered by a service contract.) If they hooked up the old one and it didn’t run, we could not recover any of the money we had spent so far. 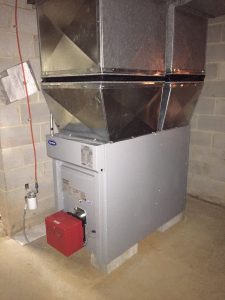 A new furnace would use 75 to 80% of the oil that the old one would use. It would be completely warranted, since all parts would be new.

Our decision came down to $2500 to bring the old furnace online versus $5700 to take it away and put in a new one. I spend about $3,000 a year to heat my house with an old furnace. Assuming 25% savings, $750 per year, a new furnace would pay the differential in less than five years, and any work it needed in those years would be covered under contract.

We ordered the new furnace. I felt bad. You had been three hours from done. You had had such plans for that furnace. If it had been just me and my money, I might have chanced it. But it wasn’t just me. It was Mother, and Mother’s money, on an income that’s much-reduced since she doesn’t have your full pension any longer. And, if you had taken those three hours back in 1968, as Dave observed, we would likely still be talking about replacing that furnace now. 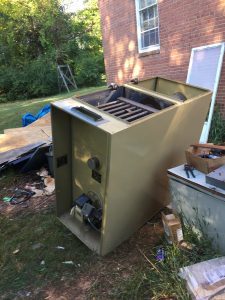 The crew came about a week later. Before I knew it, they had wheeled out the old furnace and put it on their truck. I took pictures, and I saved the front panel with the American Standard logo. I think they thought I was crazy. One of the team was named Mark. When he arrived, he immediately began looking over your collection of old computers, oscilloscopes, Geiger counters and signal generators. “Give Mark a day,” one of the guys said, “and he’ll have all that stuff running again. He loves this stuff.”

Mark was very personable. I liked him right away. I was not surprised to learn, later that day, that his mother was from Jack’s Creek. I guess I can still tell a Yancey County boy when I meet one. Mark was the one who told me that your old furnace was probably going to be used, to heat an automotive shop owned by a friend of his. I really hope that’s true. Like Mike Mulligan’s Steam Shovel, I hope our old friend can continue to be useful, even after years of silence. 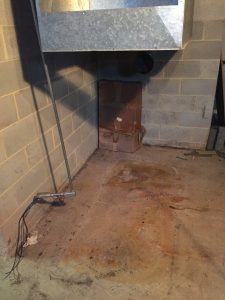 It’s been very hot these past two weeks, as high as 95 degrees. Tonight it’s down in the 60s. I think your new furnace may have its first evening run. I set the thermostat for Mother. It’s digital, but simple. Still, it confuses her, even though Dave said it’s the model they pick for older people who aren’t used to all these features.

What’s funny is that, while cleaning out the kitchen pantry last Saturday, Renee found the original thermostat you had bought and carefully put away in its box against the day you turned on the furnace. I remembered then that you had shown it to me, long ago. I’m sorry I forgot about it.

It’s just that it’s hard to keep track. You know, you showed me a lot.