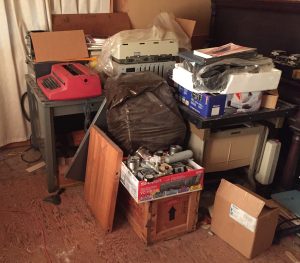 After some cleanup, this was still between us and my Grandmother Clara’s piano in the music room.

I’m in bed, sick. I don’t get sick very often, but I got this stomach thing four days ago, Saturday. I get very hungry, and, if I don’t eat, I feel like I’m going to throw up. Then, if I do eat, the food never seems to settle well. I haven’t actually vomited, but it’s not pleasant. Saturday was a shame, because it was Yoji’s memorial. Beatrice and Ursula had arranged a wonderful meal for everyone. I ate, but it’s hard to enjoy eating when your stomach is screaming at you.

I keep thinking I’m getting better, but today at work I got hit with a headache on top of the nausea. I had my flu shot, but I feel like I’ve got a touch of something. Mother and Susan have been complaining too, and none of us have eaten the same things. Something may be going around.

Today was my first day that wasn’t all-day meetings, the first in a long time. I was done by about 11:30, and then this illness just hit me like a baseball bat upside the head. Isn’t that perverse? That my body apparently waited until I had a clear schedule to allow me to be sick? That 11:30 meeting, by the way, was scheduled for two hours, but over in 15 minutes. I was reviewing my FY18 operating budget with our administrative team, and they were amazed at how well-prepared I was. I don’t know if you would be proud of me, or ashamed, because my being “well-prepared” consisted of my being reminded that the meeting was coming, realizing I had done nothing to prepare for it, and then making a  last-minute push.

Sometimes we put things off, don’t we? And speaking of that, I had mentioned that Christian clearing the breakfast table was a turning point for you. After that, you seemed to have a burst of energy. You started by going through papers that had been on the table. Now, you didn’t throw anything away, but you did go through them. And then, without anyone suggesting it, you cleared the two copiers out of the breakfast room, thus removing the basic superstructure of the junk mountain you had built over the years, and leaving us clear to, well, clear. It wasn’t long before the kitchen and breakfast room were free of non-essentials, and we were able to start actually talking realistically about finishing parts of the house that had never been finished.

It was about this time that I discovered something that should not have surprised me, but did. You had done so much plumbing work in that house. You had had a well drilled, installed a water tank and water heater, put in a septic tank, run drains to the kitchen, laundry room and five bathrooms. You had connected the downstairs bathroom—the guest bathroom, really, the one in the tiny corner of the house we’d started living in in 1967—and the laundry room sink and washing machine…

And then you had stopped. An apartment-sized area of the house—about 900 square feet—had running water. The rest just had drains. Serious, cast-iron drains. When I brought the County plumbing inspector in to help me decide what needed to be done next, he said, “Those were the days when men were men and plumbing was an honest profession.” He said this to my plumber, who did not appreciate it.

I thought you had run all those supply lines. Then I remembered—there was a huge stock of copper pipe hidden away against the day you would run them. I should have realized all that copper wasn’t just extra. 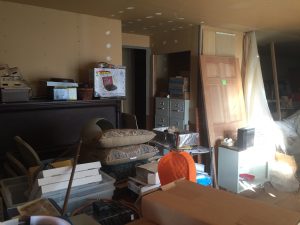 The music room, as storage…

So I wasn’t going to be able to just bring an extra bathroom online, or hook up the kitchen sink. I was going to have to have a sizable amount of plumbing work done. And that was not something you were going to allow easily. Since, at that point, you were still mobile—very mobile—I tabled the plumbing. I moved on to emptying the music room. Yes, your house has a music room. I’ve mentioned it before now, I’m sure. In 2014, it was a junk storage room. There was a piano in it, yes… if you could find it. There was also a huge stack of lumber under the window—fifteen feet long, four feet high and four feet deep. My old desk—steel, government surplus—was under mountains of boxes. The boxes were carefully interleaved so you couldn’t move one without disturbing others—basically, you had built a room-sized Jenga game. What was in there? Everything. Tools, old newspapers, trash, surplus electronics. Have I talked about the surplus electronics? Notsure I have. I’ll remind you how that began on another day. 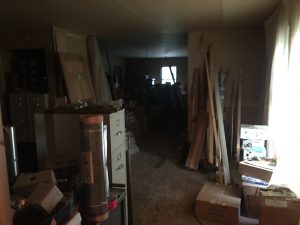 Another view. At this point, the stove and air compressor had been removed, as well as a huge stack of lumber that had been under the window since the 1960s.

At the base of one stack was the kitchen stovetop, new in its box and awaiting installation since the late 1960s, and a Sears air compressor—a huge one on wheels—also new in its box. I placed its vintage at late 1970s. Its box was twice as big as it was, so I cut it free and recycled the box. I then wheeled the compressor out to the garage. The garage is 2600 square feet, and there was no free space in it. I manage to fit the compressor just inside the inner doorway.

A few days later, when I came to visit, you asked me to come to the garage with you. You pointed to the compressor.

“Where did it come from?” 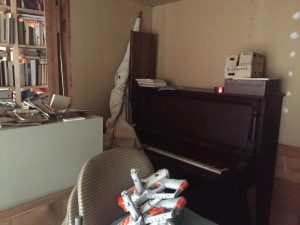